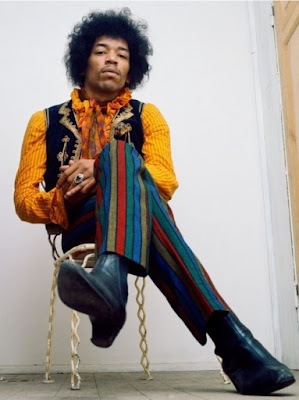 Yesterday, my copy of The Essential Jimi Hendrix , Volumes One and Two arrived in the mail.  I had seen a used copy available on Amazon, so I quickly snatched it up and listened to it on the way to work, lunch, back home, and at home.

Now, one might wonder why in the name of Les Paul would your humble correspondent be so anxious to grab a copy of two albums previously available in the mid/late 70’s and not available on CD since 1989 when there are multiple new collections of Hendrix’s music that have been available ever since on other record labels with even better sound and maybe more songs.

I’m sure most of you already know the answer to that, if you collect music or have ever collected it.  Most people associate certain music with certain times (good or bad) in our lives.  For me, when I found this album over 35 years ago, the music I heard put me on a path that eventually guided me to discover the blues.  It wasn’t something that I set out to do, but it ended up leading me that way.

Now, I had enjoyed music for a long time, beginning probably at age 12 or 13……Top 40 stuff to begin with…..later on, I got into the R&B/funk of the time and even (shudder) disco for a bit.  All during my early years, though, I had listened to some of the popular bands of the 60’s, mostly the Beatles at the beginning.  My uncle had given us a metal box full of 45’s from various 60’s bands.  There were singles by the Beatles, the Rolling Stones, the Beach Boys, plus a lot of older 45’s that I assumed belonged to my grandparents.  When I was young, I’m saying four or five years old, I listened to nearly all of them.

Later on, when I was in my early teens, my mom ended up with my grandparents’ stereo record player.  It was a beauty…....a turntable mounted inside a wooden cabinet.  I don’t even remember if it worked anymore when we got it, but inside of it, my uncle had left about twenty LP’s from various artists of the late 60’s……I remember the Doors, the Rascals, Vanilla Fudge, and a few odds and ends.  The one I remembered the most was record with no jacket……..it was one of the LP’s from Jimi Hendrix’s Electric Ladyland.

I had heard of Jimi Hendrix, but that was about it.  This was maybe 1979 or 1980, so he had been gone from the popular music scene about eight or nine years by then.  Keep in mind that this was in the pre-internet, pre-information-at-your-fingertips era, so there was no YouTube, Wikipedia, or allmusic.com to go to and reference him.  All I had was this lone LP, so I “borrowed” my sister’s turntable and gave it a spin. 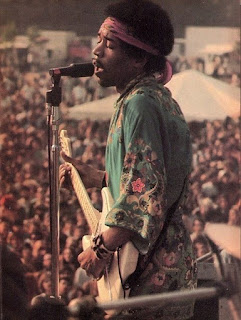 There’s really no need to describe my first reactions……they were the same as most people’s when they first heard Hendrix.  To be honest, I wasn’t sure what I was expecting, but after I heard it, I knew that I wanted to hear much more of it.  It was leaps and bounds above what I was listening to at the time because it seemed daring and innovative.  Most of the sounds coming out of my radio were pretty standard, cookie-cutter, regardless of genre, so Hendrix sort of set my hair on fire.

Soon, I was thumbing through the album racks at the closest record store trying to find more.  Back in those days, most record stores kept the most current albums and singles available, with the occasional catalog item from the longer-lasting, better-known artists.  The only Hendrix item in the store on cassette (my favorite media form at the time) that day was Smash Hits, which was all I needed for starters……a ten-song intro to get me going…..and get me going it did!!

A few months later, I was in another record store, much bigger with a much bigger selection, and I found Volume One of The Essential Jimi Hendrix.  Upon its initial release in the mid/late 70’s, it was a double album which collected nearly everything of note in the studio that had previously been released.  Most of Smash Hits was on it, but there were many, many more that I got to hear for the first time.  It was also available as a cassette, so I snatched it up and listened to it on a fairly regular basis for the next twenty years.

A few months later, I found Volume 2.  It featured several songs that were also on the first volume, but it included several famous live tracks……his memorable version of “Wild Thing,” from the Monterey Pop Festival in 1967, the incredible twelve-minute “Machine Gun,” recorded at the Fillmore East with his newly formed Band of Gypsys in early 1970, the requisite “Star Spangled Banner” from Woodstock, plus a wild studio version of Van Morrison’s “Gloria,” previously only heard as a single. 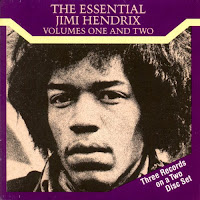 Shortly before Warner Brothers/Reprise Records lost the rights to the Hendrix catalog in 1989, they issued both volumes of Essential on a 2-CD set, which is what I picked up this week.  For many fans, these two albums are all the Jimi Hendrix they will ever need, but it wasn’t enough for me.  I eventually went back and picked up more of his recordings…..Electric Ladyland, for starters.  The Jimi Hendrix Concerts captured many great, and some previously unheard live performances.  I also grabbed his Monterey album that he split with Otis Redding, plus a later release that collected many of his live-in-the-studio recordings at Radio One for the BBC.

Though Jimi Hendrix is more often associated with rock than with blues, he also served as a HUGE influence to many blues guitarists over the past forty-plus years.  Listening to any of his live recordings, and many of his studio efforts, will show that the blues had deep roots within his music (just check out the 90’s compilation, appropriately titled Blues).  He was influenced by blues guitarists like Johnny “Guitar” Watson (check out his “Space Guitar”), Hubert Sumlin, Buddy Guy, B.B. King, Albert King, Ike Turner, Robert Johnson, and others.

One of Hendrix’s early singles was “Hey Joe,” was an old folk song with a heavy blues theme to its lyrics.  He also recorded Earl King’s “Come On” on Electric Ladyland.

Meanwhile, many of Hendrix’s own songs have been covered by blues artists......Stevie Ray Vaughan alone has covered “Voodoo Chile (Slight Return),” “Come On,” and “Little Wing”….and he influenced so many guitarists in his time and in later times…..Vaughan, Jeff Beck, Jimmy Page, Eric Clapton, Carlos Santana, Johnny Winter, Ernie Isley, James Blood Ulmer, Gary Moore, Joe Bonamassa, Vernon Reid, Joe Satriani, and so many others.  If you go see Buddy Guy, the blues legends almost always does a Hendrix medley.  Guy’s antics as an up-and-coming blues guitarist were the stuff of legend and that was before he’d heard Hendrix.  Today’s version of Buddy Guy combines the early qualities with a healthy dose of Hendrix fireworks.

When FBF talked with rising star Toronzo Cannon a few years ago, he explained the impact that Hendrix, one of his biggest influences as a guitarist, had on his music….

“WOW.  The visual and conjunction with sounds.  His moves went right along with what was being played.  A lot of players in that time and now don’t ‘move’ when they play, they don’t dance with their instrument…..you gotta move and get the feeling.” 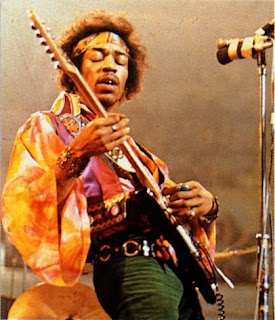 Now does what Cannon is describing sound familiar to any blues fans?  Can you think of any other guitarists who might have done similar things before Hendrix made the scene?  The aforementioned Buddy Guy did that, and he was strongly influenced by another Louisiana-born bluesman…..none other than Guitar Slim.  Hendrix not only absorbed the sounds of blues guitarists like Slim, Guy, Watson, Albert Collins and others, but he also picked up some of their showmanship and moves in the process and basically kicked things up a notch or two in the process.

Really, that's what all new blues artists are obligated to do.....take what's there and either improve on it or do their dead-level best to keep what's already there alive and kicking.  Jimi Hendrix did that, and much more, and has become as influential to blues guitarists as many of the genre's earliest pioneers.