February 21st marked two years since the death of Magic Slim.  Magic Slim was not what people would call a virtuosic musician, but what he did play he played better than anybody, maybe ever.  His style is easily recognizable.....his energetic and exuberant string bending that runs up and down the length of your spine, the churning boogie rhythms of his powerful rhythm section, his growling vocals, and his seemingly endless repertoire......his fans called him "The Human Jukebox".....that made every song he covered basically his own.

Though it took Slim a while to record, once he did get started, he was very prolific.  Most of his U.S. fans had plenty of domestic product from Magic Slim and the Teardrops, because Alligator and Rooster Blues released studio albums and B.L.U.E.S R&B released a classic (but sadly out of print) live performance of the band during the 80's, and Slim enjoyed a lengthy tenure with Blind Pig Records that lasted over twenty years, releasing nine studio albums, one live CD/DVD, and a "Greatest Hits" set.

Beyond the U.S., Slim released a truckload of CDs for European labels.  The Alligator release, Raw Magic, was originally released in France, as was a later recording (Highway Is My Home) that was reissued in the 90's on Evidence Records.  However, Slim's most fruitful European relationship was with the Austrian label, Wolf Records.

The Wolf recordings are a bit easier to find these days, thanks to the internet.  I can remember reading about these releases in Living Blues back in the 80's and early 90's and the only way that you could get them was via mail order and they sometimes costs a pretty penny to get your hands on them.  Over the years, thanks to Amazon, I was able to pick up a few of the Wolf releases here and there. 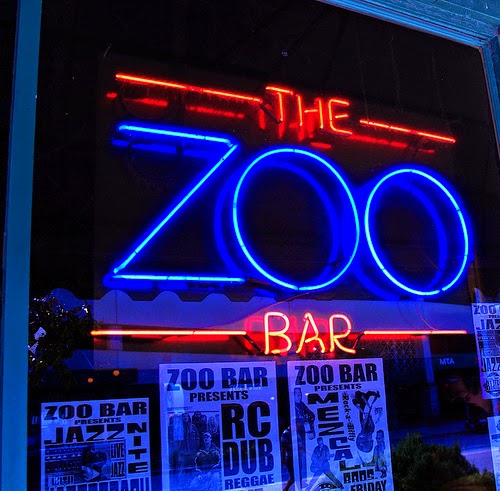 Over a four or five year period in the 90's, Wolf released five volumes of Magic Slim and the Teardrops performing at Lincoln, Nebraska's Zoo Bar, called The Zoo Bar Collection, which has been a blues hotbed since the early 70's.  The Zoo Bar owners had a connection with Chicago musician/promoter Bob Riedy and were able to bring a lot of the Windy City's finest blues musicians to Lincoln.

Magic Slim began performing at the Zoo Bar in the mid 70's......it was reportedly the first white club that he'd ever played and his first venture outside of Chicago.  Slim soon became a regular performer at the bar, playing for a week at a time, and even moved his family from Chicago to Lincoln in the 90's.


There have been many live albums recorded at the Zoo Bar over the years.  Magic Slim's series spans.....my best guess would be from the early 80's to the late 80's.  The early volumes (Volume 1, Don't Tell Me About Your Troubles, and Volume 2, See What You're Doin' To Me) feature Slim and his brother Nick Holt (bass) with drummer Nate Applewhite and rhythm guitarists Coleman Pettis and Pete Allen (Volume 2).

Pettis answered to several different nicknames.....Daddy Rabbit, Alabama Junior, Junior Pettis, etc......he backed Slim for ten years (1973 - 1983) and was a great, funky rhythm guitarist and an ideal complement to Slim's robust attack.  He also played bass and even released a few albums of his own, including a Wolf release called Nora Lee, which was recorded with the Teardrops providing support.  Pettis died in 1988 at age 53 after a battle with cancer.


Pete Allen played for several Chicago acts, including Zora Young (for over 30 years), Buddy Guy, Carey and Lurrie Bell, and Artie "Blues Boy" White.  He played guitar on Slim's Grand Slam, considered to be one of his best albums.  Allen also plays a few tracks on Volume 3 (Teardrop).  The highly underrated Allen died in 2008 from a heart attack.


On Volumes 3, 4 (Spider In My Stew), and 5 (Highway Is My Home), Slim and Holt are joined by longtime Teardrop John Primer (2nd guitar) and drummers Applewhite (Volume 3) and Michael Scott (3, 4, and 5).  Primer was a regular guitarist at Theresa's during the 70's and also played in Willie Dixon's Chicago Blues All-Stars in the late 70's.  Prior to joining Slim in 1983, he served in Muddy Waters' band until the legend's death that same year.  Like Slim and Pettis, Primer and Slim went together like peas and carrots.  When Slim began recording with Blind Pig Records in the early 90's, he graciously gave Primer several tracks on his debut recording, Gravel Road.  Primer's style was perfectly suited for Slim, but he was also capable of branching out into his own version of the classic Chicago blues sound on multiple solo albums, and is still very active today, most recently on an excellent collaboration with harp master Bob Corritore for Delta Groove, Knockin' Around These Blues.


About three or four times a year, I pull out all five of these discs and plug them in over several days.  It's always interesting to see how the band changed over time.  Actually, there's not much change in the delivery at all.  You've got funky shuffles, driving boogies, and the occasional slow blues....all powerfully delivered.  There are some subtle differences in the rhythm guitarists with each variation of the band, but you really have to listen to catch it.


I like three things about this set of discs:

(1) They show the remarkable consistency of Magic Slim and the Teardrops over an extended period.  If you play these discs consecutively, it's pretty hard to tell where one disc starts and the next one begins.  For some bands, this might be a problem, but for this band, it's impressive.  These guys were a well-oiled machine in Volume 1 (and prior) and they maintained that with no let-up for many years to follow....the only common factor on each release being Magic Slim and Nick Holt.

(2)  They provide a glimpse of the astounding repertoire of Magic Slim.  On these five volumes, the band plays 63 songs, and there are only about six tracks that appear more than once.  Slim covers tunes from blues icons like B.B. King ("Paying The Cost To Be The Boss," "How Blue Can You Get"), Lonnie Brooks ("You Know What My Body Needs"), Little Milton Campbell ("The Blues Is Alright," "Possum In My Tree," "So Mean To Me,"), Albert King ("Cold Women With Warm Hearts," She Don't Love Poor Me"), and Jimmy Reed ("You Don't Have To Go"), but he also branches out impressively, tearing into an amazing funky reading of Booker T's "Green Onions," a romping take on Chuck Berry's "Reelin' and Rockin,'" Ivory Joe Hunter's "Since I Met You Baby," and his old reliable version of Wilson Pickett's "Mustang Sally."  Also, the instrumental version of Bobbie Gentry's (yes, you read that right) "Ode To Billy Joe," is a really pleasant surprise.

(3) They prove once and for all (if there was any doubt) that Magic Slim is at his absolute best when performing live.  He did some excellent studio recordings, no doubt, but he raised things up a notch or two when performing in front of an audience.  Some of his studio recordings effective captured that live vibe, for sure (Grand Slam, Black Tornado, Gravel Road, Snakebite, etc....), but to be honest, when I have a hankering to hear some Magic Slim, I will usually opt for one of his live discs.  Many of Slim's recordings for Wolf were done in a live setting.  In fact, the label has released a few discs collecting his finest moments from various performances.  I don't have all of them, but the ones i do have are uniformly fine.  I have always preferred The Zoo Bar Collection because of their rawness and spontaneity.  It's obvious that Slim had a blast performing and the audience had a blast listening.  If you haven't listened to these recordings (there's also a Volume 6 featuring Primer with the Teardrops, but I haven't heard it yet), give them a shot.  You too will have a blast. 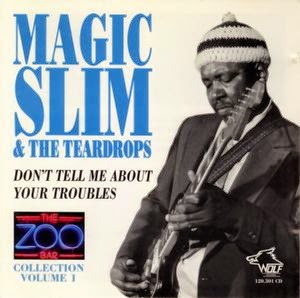 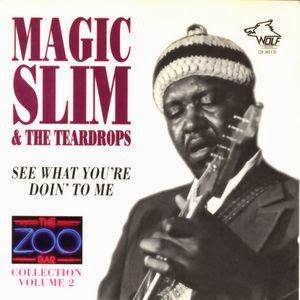 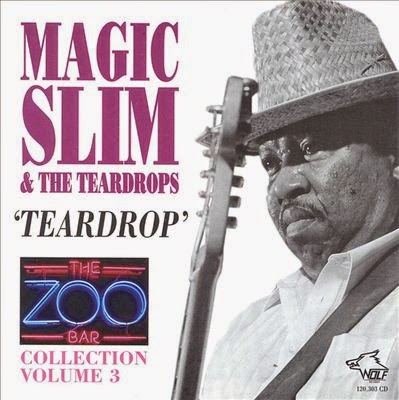 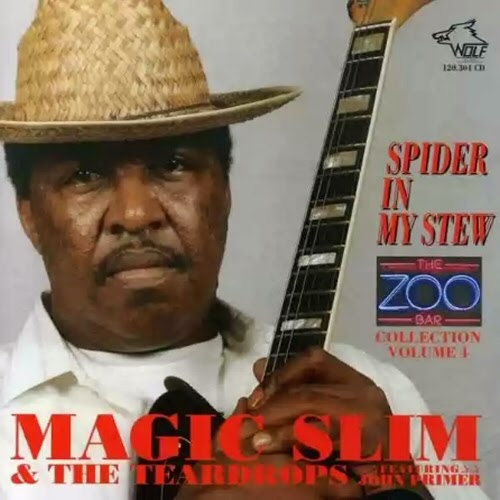 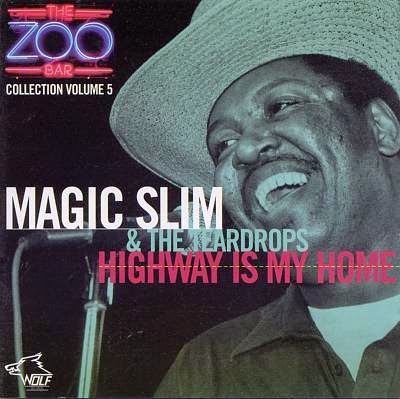 Living in Lincoln Ne home of The Zoo Bar I got to see Magic Slim a bunch... I remember every now and again looking to see who was at the Zoo Tonight? Oh it's Slim, I'll catch him next time.

Well just a little over 2 years ago Magic Slim ran out of next times leaving a gigantic hole in the Blues world and The Zoo Bar.

Here is a chance to catch some of Slim's work again! Play on big man play on, and thank you for all the times I did catch you.

Thanks for posting. I hate that I was never able to see him in person.