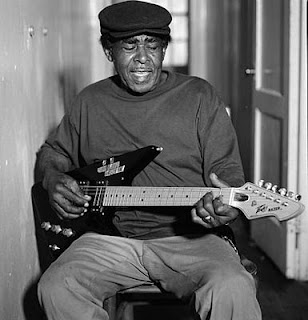 This week's selection brings Volume One of FBF's Blues Fix Mix CD to a conclusion.  I hope you've enjoyed listening as much as I enjoyed compiling this several years ago.  At this point, I've completed four volumes of the Blues Fix Mix CD series, which I usually put together for friends who are just becoming acquainted with the blues.  While it can by no means be seen (or heard) as a definitive set of blues, it is definitely a set of blues that I've enjoyed listening to over my thirty years of being a blues fan.  We'll be looking at Volume Two in the near future.

For my final selection of Volume One, I opted to conclude with an instrumental....one of my favorites.  If I had a theme song, this song would be on the short list.  It's the perfect song for driving down a hot, dusty Mississippi highway (and actually was featured a lot during the M for Mississippi documentary).  It's just a fun song overall and is an excellent example of modern Mississippi Delta blues from T-Model Ford and Terry "Harmonica" Bean........."Red's Houseparty."

"Red's Houseparty" was part of Ford's Jack Daniel Time release from 2008.  The album was a live session recorded at Red's Lounge in Clarksdale, MS, which happened to be Ford's favorite juke joint.  It was a mix of band tracks, which featured Ford with Bean on harmonica (of course) and drummers Lee Williams and Sam Carr, and several acoustic solo tracks by Ford (a rarity).  There's nothing at all fancy on this set, just the blues played well by a man who came to recording late in life, but made the most of it while he was here.

Volume Two coming soon, but Friday Blues Fix will be back in a couple of weeks with our Top Twenty Albums for 2017.