As promised last week, FBF will take a look at ten of Black Top Records standout recordings.  This is not a top ten greatest all-time list, but more of a ten personal favorites list.  Your list may be a different animal entirely, but here's mine (in no particular order): 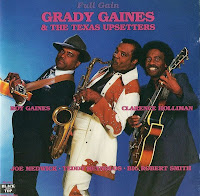 Grady Gaines & the Texas Upsetters - Full Gain (1988):  The former Little Richard sideman rocked the house with this superlative effort, bringing a boatload of Houston-area talent along for the ride.  Guitarists Roy Gaines (Grady's brother) and Clarence Hollimon shine, and the vocalists (Roy Gaines, piano man Teddy Reynolds, Big Robert Smith, and long-lost Joe Medwick) make a great recording even greater.  Gaines' follow-up, Horn of Plenty, was also a rocking good time, but this one gets the nod because of the presence of Roy Gaines and Joe Medwick (who passed away before the second release). As you can see from the video below, Gaines and the Upsetters are still going strong. 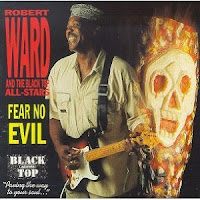 Robert Ward -  Fear No Evil (1991):  Ward had not recorded as a leader in almost 25 years when he wandered into an Ohio fan's guitar shop store one day.  The fan had been searching for him for years, and Ward soon signed with Black Top and released this incredible album.  Mixing remakes of his classic 60's sides with some interesting new material, Ward ended up with one of the best blues recordings of the 1990's.  Despite his extended absence, Ward's skills were fully intact, both as an awesome guitarist and a powerful singer. 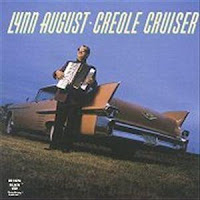 Lynn August - Creole Cruiser (1992):  When I picked up this album, I had never heard of Lynn August and owned no Zydeco recordings.  Blind from birth, August first learned to play the drums and ended up playing percussion with the legendary Esquerita, who encouraged him to take up keyboards.  He backed Buckwheat Zydeco on Hammond B3 in the 60's and later focused on R&B and Swamp Pop.  In the late 80's, he locked himself in a room and taught himself to play accordion, starting his Zydeco career in earnest.  On Creole Cruiser, August mixes his R&B and Swamp Pop influences seamlessly with Zydeco, giving the music an little bit of an extra "oomph."  On one track, "Undivided Love," August parks behind the B3 and lays down one of the funkiest tracks you'll ever hear.  Big fun from start to finish. 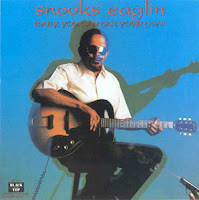 Snooks Eaglin - Baby You Can Get Your Gun (1987):  Speaking of fun, check out Snooks Eaglin.  Nicknamed "the Human Juke Box," the blind guitarist started out as a solo acoustic folk/blues guitarist, but soon signed with Dave Bartholomew and Imperial Records, where his fretwork adorned many a side throughout the 60's.  He also played with Professor Longhair in the 70's, appearing on some of Fess's "lost" sessions recorded in Baton Rouge and Memphis.  Eaglin's debut recording for Black Top has a diverse set list, ranging from the funky "Drop The Bomb," the surf rocker "Profidia," and the R&B of the Four Blazers' "Mary Jo," and Eugene Church's "Pretty Girls Everywhere."  Eaglin is absolutely astonishing on guitar and his vocal style have a touch of Ray Charles in them.  Each of Eaglin's subsequent Black Top recordings were an improvement over this one, but this one is special because it was my first experience with the unpredictable guitarist. 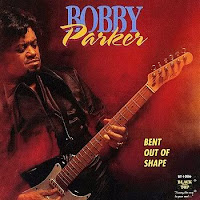 Bobby Parker - Bent Out Of Shape (1993):  Parker is best known for his 1961 hit, "Watch Your Step," and is regarded as a major influence on 60's artists like Spencer Davis, John Lennon, John Mayall, Robin Trower, Eric Clapton, Jimmy Page, and Carlos Santana (who covered "Watch Your Step" on his Havana Moon recording).  The best way to describe Parker was probably summed up by protege Bobby Radcliff, who described his music as "Guitar Slim meets James Brown."  If you're a blues fan, do you really need to hear anything else.  This was his Black Top debut and ranks with the best of the 90's, with Parker re-recording "Watch Your Step," along with a couple of other oldies, and some impressive new tunes as well.  Seek this one out, by all means, and be sure to catch Parker live in the Washington D.C. area. 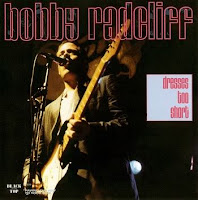 Bobby Radcliff - Dresses Too Short (1989):  I covered this release a while back, but it's worth revisiting.  Radcliff mixes the best of Magic Sam, Otis Rush, and Bobby Parker.  He can sing and play like nobody's business and this first disc was his best, with some choice cover tunes and some excellent performances.  Standouts include the Dyke & the Blazers' favorite, "Ugh," the Syl Johnson title track, Rush's "Keep Lovin' Me Baby," and a manic take of the instrumental "Kool and the Gang." 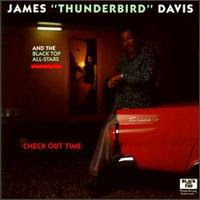 James "Thunderbird" Davis - Check Out Time (1989):  Davis started out as an opening act for Guitar Slim (where he earned his "Thunderbird" nickname after a disasterous encounter with the wine of the same name), but soon signed with Duke Records, where he recorded several classics, including "Blue Monday" and "Your Turn To Cry," and also served as demo singer for Bobby Bland.  He dropped off the scene in the late 60's and was believed to be dead when he resurfaced in the late 80's and released this recording.  Clarence Hollimon was on hand to play some wonderful guitar (along with Anson Funderburgh) and Lloyd Lambert (Guitar Slim's bandleader) played bass.  Davis sounded even better than he did on his Duke sides, and soon relaunched his music career.  He died with his boots on in St. Paul, MN, suffering a fatal heart attack onstage after finishing his song, "What Else Is There To Do?". Anson Funderburgh & The Rockets (Featuring Sam Myers) - Sins (1987):  Funderburgh was one of the first bluesmen I ever heard of.  He was a regular at clubs in Jackson, MS in the late 70's and early 80's.  He was also one of the first live acts I got to see when he appeared at the Chunky Rhythm and Blues Festival.  Myers, a Jackson native, had enjoyed a nice career as a solo artist in the 60's before teaming up with Funderburgh and his band.  Most of the group's output is first-rate, but Sins stands out slightly above the others.  The group's mix of Texas and the Delta is hard to top and Myers sounds as good as he ever did.  Funderburgh also played guitar on numerous Black Top sessions over the years for other artists.  Myers passed away in 2006.  (Useless Trivia Time........former Rockets bass player Mike  Judge is the creator of Beavis and Butthead). 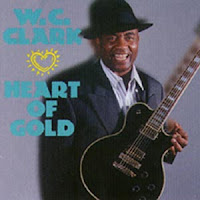 W. C. Clark - Heart of Gold (1994):  At the time of this release, Clark was known by most for serving in an early edition of Stevie Ray Vaughan's Double Trouble (called Triple Threat) and for writing SRV's hit, "Cold Shot."  Few realized that Clark was a first-rate guitarist and a soul singer on par with Al Green.  In fact, the entire disc has a "Memphis Soul via Austin" feel.  There's plenty of sweat-drenched soul and Texas roadhouse blues to go around on this disc.  Plus, he got to record his own version of "Cold Shot" (as you heard on last week's post).  This was a great later release for the label and one of three standouts from Mr. Clark (who later signed with Alligator). 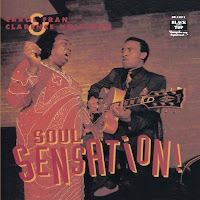 Carol Fran & Clarence Hollimon - Soul Sensation (1992):  Another fun ride that we've visited before.  Fran and Hollimon were first heard on the Gulf Coast Blues anthology in 1990, but this release gives them an entire disc to strut their stuff.  They mix blues, jazz, soul, and even gospel and Hollimon's guitar work is outstanding, as he gets two great instrumentals ("Blues For Carol" and the amazing "Gristle").  Fran does one incredible vocal turn after another, with songs like "I Needs To Be Be'd With," and "I Had A Talk With My Man," and "This Little Light."  Lynn August appears on the Zydeco-flavored "Push-Pull."


Most of these recordings have been out of print a while, but are easily found via the internet.  Trust me when I say that you will agree that they are worth searching for.
Posted by Graham at 12:01 AM

Nice list, Black Top Records had a lot of talented artists who put out some of the best in blues during the 90's. I would definately add an Earl King album in the mix!

Thanks. You are right. I should have listed Earl King's collaboration with Roomful of Blues, Glazed. I got to see him at Jazz Fest right after it was released with Roomful and it was a great show. There were some pretty good songs on that album.