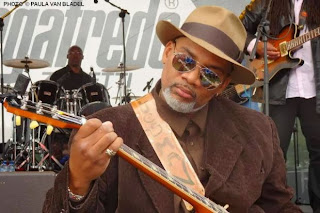 Toronzo Cannon grew up around the Chicago blues clubs, listening to artists like Buddy Guy, Junior Wells, and Muddy Waters.  He was as taken by the effect the music had on the listeners as he was the music itself, which led him to get his first guitar as a teenager.  Like many modern blues men, when Cannon started playing the blues, he inserted other styles that he had grown up listening to, like R&B, soul, and funk, but most especially the music of one James Marshall Hendrix.  While developing his unique guitar style and his strong, charismatic vocals, he also became one of the most original songwriters in the blues today, often drawing inspiration from stories he hears and characters he encounters as part of his day job as a bus driver for CTA. 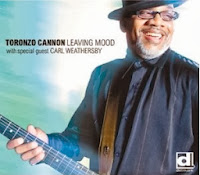 Cannon served as rhythm guitarist with Wayne Baker Brooks and Joanna Connor before striking out on his own and forming the Cannonball Express.  His electrifying stage presence led him to play many of the Chicago blues clubs and throughout most of the Midwest.  He became a festival favorite and eventually signed with Delmark Records, who released the stunning Leaving Mood in 2011.  Easily one of the best releases of that year, it showed an artist who seemingly came out of nowhere who seemed to be the complete musical package. 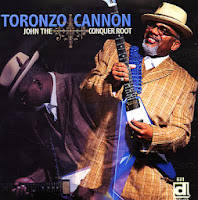 Cannon's latest release, John The Conquer Root, expands on his Delmark debut and then some.  With forays into soul ("Cold World"), funk ("If You're Woman Enough To Leave Me" and "Big Ray Bop"), Hendrixian psychedelic blues/rock (the title track and the closer, "Root To The Fruit....She's Mine (Reprise)"), slow burning blues ("You Made Me This Way"), and a sweet acoustic number, "Let It Shine Always," that teams Cannon with former boss Connor and fellow Delmark recording artist Mike Wheeler, it's one of the most powerful releases I've heard so far this year.

Toronzo Cannon was kind enough to sit down and answer a few questions from Friday Blues Fix.  We greatly appreciate his time and effort and we strongly recommend that you check out his new disc, and then go back and pick up his others, too, of course.  You can thank me later. 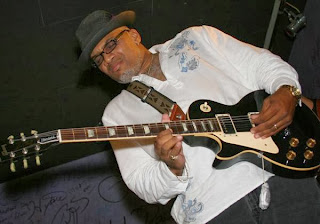 Friday Blues Fix:  John The Conquer Root does something I didn’t think was possible….it improves on your earlier release, Leaving Mood.  Was that something you were concerned about going in and what did you decide to do different this time around?
Toronzo Cannon:  I was a little concerned about it, you're putting your thoughts and music out for people to hear to like or dislike. I went into this like the LeavingMood CD. I want to write stories, interesting stories. On this CD I wrote ALL the songs myself.


FBF:  What kind of music did you listen to while you were growing up?
TC:  I was listening to Chaka Khan, Funkadelic, Minnie Riperton, Earth Wind & Fire  etc...and in the 80's I started listening to New Wave, Ska, Reggae and R&B
FBF:  When did you decide that you wanted to be a musician?
TC:  About 1991-2. I couldn't play basketball anymore so I was sitting around and a John Cougar video came on…and I wanted an acoustic guitar which my sister bought me.
FBF:  You have stated that Jimi Hendrix is your one of your biggest influence as a guitarist…..what was it about him that initially grabbed you and still does today?
TC:  WOW. The visual and conjunction with sounds. His moves went right along with what was being played. A lot of players in that time and now don't "move" when they play, they don't dance with their  instrument…you gotta move and get the feeling.
FBF:  If he were still alive and playing today, what direction do you think Hendrix would have taken with his music?
TC:  He might have dabbled in other genres of music....Jazz, funk (even though he was on the forefront of funk music), maybe even country. He could play it all. He that at Woodstock on the improvisational piece he did. Check the YouTube of it.
FBF:  Who are some other musicians that inspired you, both as a performer and a composer?
TC:  Little Jimmy King, Mike Wheeler, Tutu Jones, Freddie King, Albert King, and just recently Gary Clark, Jr.
FBF:  You’ve played with a lot of great Chicago-area musicians over the years….do you have any cool stories about your playing with all these musicians, either in the studio or onstage?
TC:  Just the stories and the conversations we've had. They remind me of the pitfalls they give advice. But this is the Blues and everybody is not your friend. You got some snakes out there too. I see them too.
FBF:  Does your job working as a bus driver in Chicago during the day (for over 20 years) play heavily into your songwriting….the things and people you encounter on a daily basis?
TC:  Yes…I see REAL REALITY not the mess they say is reality on TV now. Plus I've lived a little life, too. It should come out in your music…it's easier to sing what you know about.
FBF:  Can you tell us how some of your favorite songs originated…..what inspired you to write them?
TC:  This new CD is life experiences (some) and just things I've seen. "John The Conquer Root" is one of my favorites, even though I don't' believe in the "root," I like the story and things people still do to gain favor of another.


FBF:  Musically speaking, is there anything that you want to do that you haven’t had the opportunity to do yet?
TC:  I just want to keep putting out good lyrics and music….I would like to write for Buddy Guy, BB King, etc....
Bonus Question.....FBF:  What is your favorite and least favorite part of being a musician?
TC:  I love that people like to hear my thoughts on record and the traveling to different states and countries. I have a gig in Armenia this November, I just did France and Holland all while keeping a straight job. I don't like the "cut-throat" aspect of it with people that are supposed to be "your peers" and "friends". You have to keep your guard up and enjoy yourself at the same time, BUT that's the BLUES!!!!