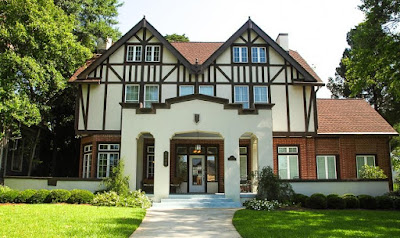 It's been a few weeks since we've posted here, but there have been a lot of blues to be seen and heard during that time.  We've been out and about a bit, maintaining a respectable distance as much as possible, but it's been a while since we've been able to travel very much......almost five years for one reason or another, so we've taken a few opportunities to check things out this summer.

In May, we traveled to Macon, GA.  I'd wanted to go there for years.  The Allman Brothers Band called Macon home for a number of years and the house they lived in during the early 70's, dubbed The Big House, is now a museum with tons of ABB memorabilia.  I became a fan of the band after buying their Dreams box set in the late 80's and really seeing what the band was all about.....how deep their roots dug into the blues, as well as jazz, soul, R&B, and country, eventually forming the foundation for Southern rock.

For a fan of the band, The Big House is a must-see.  It traces the band's history far beyond their time spent in Macon, with lots of clothes, instruments, furniture, and many other items even donated by the band over the years.  It was really cool getting to see the actual guitars used by Duane Allman, Dickey Betts, Warren Haynes, and Derek Trucks, along with one of Gregg Allman's B3's, bass guitars from Berry Oakley, Allen Woody, and Oteil Burbridge, and Butch Trucks and Jaimoe's tools of the trade, too.

The Big House also had a great gift shop, so I picked up a couple of ABB CD's.....a set from the early 70's with the first incarnation of the band and a 2009 set from the 40th Anniversary tour at the Beacon Theatre with Eric Clapton sitting in, along with a DVD from the early 90's band (I later tracked down a couple of other DVDs from the Beacon.....around 2003 and 2009).  The later edition of the band was every bit as formidable as the first edition to these ears.  We also visited Rose Hill, the cemetery where Duane, Gregg, Berry, and Butch are buried, along with the gravesites of Elizabeth Reed and "Little Martha" (the inspiration for a couple of their greatest songs).

Soul legend Otis Redding also called Macon home, but the Otis Redding Foundation building, which also hosts a museum, from what I'm told, was closed on the weekend and his grave is on private property.  We were also unable to visit the Capricorn Records museum at Mercer University because of time limitations, but we would love to go back soon and catch what we missed.

My birthday is in June, which means Amazon gift cards, which means I picked up lots of great music and reading material.  I grabbed a couple of country blues CDs......Bukka White's phenomenal Vocalion recordings from 1937-1941 (some of the most passionate blues ever put to wax), and an excellent early 60's set from Arhoolie called I Have To Paint My Face, which features tracks from Sam Chatmon, K.C. Douglas, Big Joe Williams, and R.C. Smith, and is definitely worth a listen.  I also found Johnny Shines' Last Night's Dream (with Big Walter Horton, Willie Dixon, Clifton James, and Otis Spann in support) for a nice price and it's definitely a keeper, which should be obvious given the line-up. 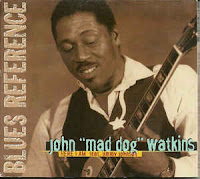 I also grabbed King of the Electric Blues, a collection of Muddy Waters' Blue Sky recordings from the late 70's (the old lion still had plenty of fire in his belly), Rough Dried Woman  a collection of Magic Slim's Wolf recordings (because you can't have enough Magic Slim in your collection), and a copy of John Watkins' lone album, Here I Am.  I heard Watkins on the 80's Alligator collection, The New Bluebloods, but never heard anything else.  He released this album in the 80's for a French label, which was difficult to find until Blues Reference reissued it a few years back.  Watkins never released another album due to personal issues and some hard luck, but he is performing again now, so there's always a chance for more. 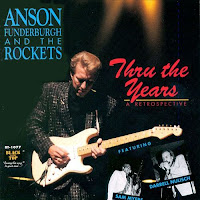 I also purchased a few more releases from the great Black Top Records....some that I missed during the label's later years.....Roscoe Shelton's Let It Shine, Earl Gaines' Everything's Gonna Be Alright, Tommy Ridgely's Since The Blues Began, and a retrospective of Anson Funderburgh's recordings with the label (Thru the Years).  I was impressed with the quality of the first three recordings...all three singers sounded as good as their earlier recordings, maybe even better.....and I had almost forgotten what a great guitarist Funderburgh was.  He was one of my first blues guitar heroes and I got to see him perform several times in the late 80's.

On the rock side of the blues, I picked up a few of Santana's earliest recordings (they were originally known as the Santana Blues Band and the blues runs deep in Carlos Santana's fretwork) as they began to move more into a jazz direction, a pair of Allman Brothers Band recordings with Duane Allman at the helm (the 1970 set at American University and the excellent 1970 performance at the Atlanta International Pop Festival).  There were also three Jimi Hendrix sets of previously unreleased tracks from 1968-1970 that were heavy on blues influences (Valleys of Neptune, People, Hell, and Angels, and Both Sides of the Sky).  Hendrix was one of the indirect influences in guiding me to the blues, whether I knew it at the time or not. 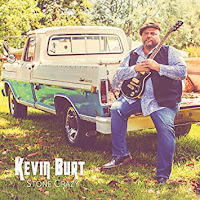 I also picked up a newer blues set from one of my recent favorites, Kevin Burt.  His Heartland & Soul release from a few years back just blew me away with it's energy and passion, so when I found his newest, Stone Crazy, I had to have it and it's every bit as good as it's predecessor.  If you haven't heard Kevin Burt before, and you are a blues fan, I strongly recommend you check this guy out.

That's not all we listened to this summer......we'll look at a few more in the coming weeks, Also, in a few weeks, we'll look at some of the books I've picked up.......I'm reading three or four at a time and haven't finished any of them yet.  Until then.......