As far as Detroit blues men go, there was only one who ranked above Eddie "Guitar" Burns, who died last week at the age of 84......John Lee Hooker.  Burns' career started in the 1940's and spanned seven decades.  He started playing harmonica, but soon moved to guitar, earning the "Guitar" nickname in the process.  Burns' younger brother, Jimmy got his start in Chicago in the 60's, specializing in soul and R&B-based blues, but soon gave up the blues to marry and raise his family, opening and operating a barbecue stand for many years before resurfacing in the early 90's.  Though the brothers' styles were somewhat different, Eddie playing more old school urban blues and Jimmy mixing blues and R&B influences, their styles meshed together very well when they did get the opportunity to record together.

Eddie Burns was born in Belzoni, MS on February 8, 1928.  His father worked as a sharecropper, but also played music and gambled on the side.  Burns was raised mostly by his grandparents, who owned a record player and some 78s of artists like Sonny Boy Williamson I, Jazz Gillum, Big Bill Broonzy, Memphis Slim, Walter Davis, Lil Green, and Burns' favorite, Tommy McClennan.  McClennan and Williamson were Burns' biggest influences as a musician.  While the first Williamson inspired Burns on record, the second Sonny Boy Williamson inspired Burns to start playing the harmonica after the youngster caught a Williamson performance.

Burns migrated to Iowa to work for the Illinois Central railroad, but left work shortly and fell in with guitarist John T. Smith, who had also recently quit the railroad in Waterloo, Iowa.  Burns recalled in a Living Blues interview from 2001 that Smith didn't have a capo for his guitar, so he used a pencil tied with string around the neck, which was apparently a common practice at the time.  Smith met a woman from Detroit who was vacationing in Waterloo, and she ended up taking him  back to Detroit with her, with Burns following close behind.

Burns and Smith ended up recording in Detroit, thanks to some help from John Lee Hooker, in 1948.  Burns' first single was for Palda Records, "Notoriety Woman."  By the next year, Burns had started playing guitar and was backing Hooker on guitar on several of Hooker's singles.

While his brother was beginning to make a name for himself on the Detroit blues scene, younger brother Jimmy, born in Dublin, MS on February 27, 1943, was a five-year-old, who would soon be working the fields, picking cotton and sharecropping with his parents.  By the time Jimmy Burns was old enough to really be aware of his surrounding, his brother Eddie, 15 years older, had moved out.  The two actually didn't develop a real relationship until Jimmy moved to Chicago with his parents in 1955.  From that point, they would visit each other a couple of times a year and rarely even discussed music when they were together.

Jimmy Burns picked up guitar on his own as a teen.  He started playing on a diddley bow, but soon graduated to a regular guitar that someone had loaned to his mother.  He was influenced by artists like Muddy Waters and John Lee Hooker (at the time, Burns didn't realize that his older brother was playing with Hooker).  Gospel music was also a big influence, as Burns sang in church regularly and was also a part of a singing group, The Medallionaires, who recorded in the early 50's, and backed other musicians like Jimmie Lee Robinson.  The Medallionaires performed regularly around Chicago at the R&B revues and also at various record hops during the 50's.

During the 50's, Eddie Burns recorded sparingly, supporting himself as a mechanic, but what he did record was first-rate.  He recorded for DeLuxe ("Hello Miss Jessie Lee"), Checker ("Biscuit Baking Mama"), J-V-B ("Dont'cha Leave Me Baby") and Chess ("Jinglin' Baby") during the 50's, sometimes venturing into R&B territory.  By the early 60's, he had hooked up with Harvey Fuqua's Harvey Records, including "Orange Driver" and "Hard Hearted Woman," both of which featured backing on drums by a young Marvin Gaye.  He also appeared on John Lee Hooker's Chess release, The Real Folk Blues, in the mid 60's, and during this time picked up the nickname Eddie "Guitar" Burns. 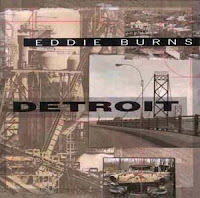 In the early 70's, Eddie Burns embarked on a European tour and released an album, Bottle It Up and Go, which was recorded in England, in 1972.  He also made an appearance at the Ann Arbor Blues and Jazz Festival the next year and returned to Europe in the mid 70's.  His track, "Orange Driver," was recorded by The J. Geils Band in 1975.  Burns didn't record again until 1989, when he released Detroit on the Blue Suit label.  An excellent representation of his talents, Detroit allowed Burns to play guitar and harmonica, and was reissued by Evidence Records in the late 90's.

During the 60's, Jimmy Burns began participating in the Chicago folk scene, playing guitar but not playing much blues.  Mid-decade, he recorded several soul singles for labels like USA, Minit, Tip Top, and Erica.  He traveled the Midwest with a band called the Fantastic Epics, opening for Jeff Beck and the Yardbirds.  Later, he formed his own band, Jimmy Burns and the Gas Company, in the late 60's.

In the 70's, however, Burns put his music career on the backburner, choosing to focus on raising his family and running his own barbecue stand, Uncle Mickey's, though he continued to perform at various venues around the Windy City, focusing on soul music, but slowly gravitating toward blues by the end of the decade, after hearing Carey and Lurrie Bell perform. 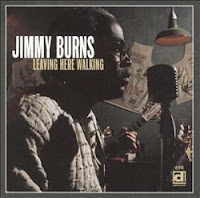 In the 90's, after his family had grown up, Jimmy Burns began a long residency playing the blues at the Smokedaddy Club in Chicago.  From there, he drew the attention of Delmark Records' owner, Bob Koester, who decided to record him after hearing just one set.  It proved to be a good decision, as Burns' debut recording in 1996, Leaving Here Walking, won a boatload of acclaim and awards, including Best Blues Record of the Year from the National Association of Independent Record Distributors, and the French Academie Du Jazz's Big Bill Broonzy Award, and was nominated for two Blues Music Awards as well.  One of the highlights was the lengthy, tension-filled title cut, which opened the disc.

Burns followed up Leaving Here Walking with two other excellent Delmark studio releases (1999's Night Time Again and 2003's Back to the Delta) and a live CD/DVD recorded at B.L.U.E.S. in Chicago in 2007.  In 2011, he released an independent CD called Stuck In The Middle, that has also been widely acclaimed. 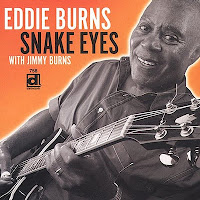 In 2002, the brothers joined forces for Eddie Burns' Delmark release, Snake Eyes.  Recorded just a couple of days after the 9/11 attacks, it featured Eddie Burns' plaintive vocals, guitar, and harmonica, with Jimmy Burns providing backing on electric and acoustic guitar, and even joining in on vocals for the rowdy Charles Calhoun hit, "Your Cash Ain't Nothin' But Trash."  Though primarily an disc of Detroit-based blues, the Chicago influence is also present, thanks to Koester's peerless production and a tight rhythm section of Roosevelt Purifoy (keyboards), Larry Taylor (drums), and Nick Charles (bass).


Eddie Burns recorded one final disc, Second Degree Burns, in 2005, and remained active as a performer until 2008, when his health began failing.  He died from heart failure last week on December 12.  Though his recorded output is very slim, what Eddie Burns did, both recording and performing live, served as an influence to many Detroit area musicians and the recordings are worth a listen.

Fortunately, Jimmy and Eddie Burns not only were able to build a strong personal relationship over time, but they also were able to form a musical partnership in the process.  Though each man's approach to the music came from different directions, they were able to bring it all together with satisfying results.  I strongly recommend all of Eddie Burns' raw and ragged urban Detroit blues and Jimmy's smooth, soulful Chicago blues releases.  You won't be disappointed with any of it.