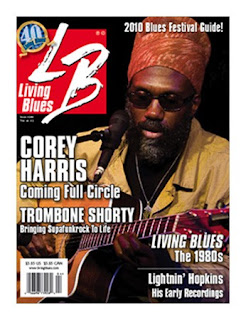 The latest issue of Living Blues features a cover story on a bluesman who varies a bit from the norm.  Corey Harris

started out playing acoustic country blues in a pre-war vein, but has gradually expanded his sound with each album release, tracking the genre's own journey over time, mixing elements of New Orleans, the Caribbean, and African music.  While I prefer his earlier work with acoustic blues to his current reggae leanings (mainly because while there are plenty of people out there playing reggae, there are not so many playing country blues), I respect an artist who refuses to be pigeonholed and takes risks with his music.  Besides, he's still one of the most important young voices of the modern blues scene.  This beautiful track, "Honeysuckle," is from one of Harris' best CD's, 1999's Greens From The Garden

There's also a feature on Living Blues during the 1980's, with old pictures and a list of 30 of the best albums of the decade, along with 30 that you might have missed.  I had a nice portion of both lists in my collection and found it hard to disagree with their choices.  Check out the latest issue and see what you think.

There's also a new issue of Blues Bytes online.  This is one of the biggest issues ever, with reviews of some great new releases, some of which I previewed here a few weeks ago.  The new release by the Holmes Brothers

.  I did the Flashback review, which covers two discs recorded on the same day in 1979, Buddy Guy's Stone Crazy!

and Junior Wells' Pleading the Blues

.  While most blues fans are familiar with the Buddy Guy release, the Junior Wells effort (which features Guy on guitar) is one that you certainly need to check out if you've previously missed it. 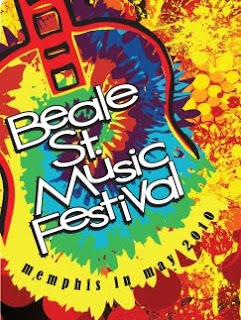 Don't forget the Memphis in May festivities this weekend, beginning April 30 and going through the weekend.  There's some major talent there each night, beginning on Friday with Joanne Shaw Taylor

.  That's just scratching the musical surface in May for Memphis, because next week (May 6) is the annual Blues Music Awards (see list of nominees here).  More on that next week.  Meanwhile, check out Derek Trucks and Susan Tedeschi from the last Crossroads Guitar Festival DVD

, covering a song by another Derek......."Anyday" from Clapton's "Derek & the Dominos" period.

has been a staple of the Beale Street scene in Memphis.  On nice days, you can often catch him playing in Handy Park.  He was house guitarist at Club Paradise for seven years, playing with B. B. King

, and was a member of the Memphis Blues Caravan.  About ten years ago, someone got him in the studio and he cut a very good album

that is well worth tracking down.  Here's Sanders from around this time last year, playing the old B. B. King chestnut, "Why I Sing The Blues," in Handy Park.

Before we sign off, please send get-well wishes to T-Model Ford

, who suffered a mild stroke earlier in the week, according to a post on Blues-L.  The post states that he's at home and has use of his limbs, but is limited on one side of his body.  Ford was a big part of the recent M for Mississippi documentary and is still going strong in his late 80's.  Hopefully, he will be back on his feet soon. 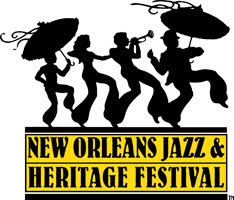 It's that time again!  The last weekend of April/first weekend of May can only mean one thing.......The New Orleans Jazz & Heritage Festival.  If you're not familiar with Jazz Fest, you're definitely missing out on a wonderful experience.  It's seven days (this Friday, Saturday, Sunday, and next Thursday through Sunday) of music, food, parades, crafts, and culture, beginning today and going through next weekend.

I first attended Jazz Fest in 1987.  I went with a friend to see one of the evening shows that were presented at that time on the riverboat President.  It was my first time in the Crescent City, so you can imagine how overwhelming it was just taking in the sights.  The show we saw was a doozy......John Lee Hooker

opened with a 45 minute set and was awesome.  The main attraction was one of my favorite bands, the Fabulous Thunderbirds

, with a list of guest stars that included Dr. John

, the Roomful of Blues

.  The show was over three hours long and I didn't want it to end.  I never knew the boat left the dock.

The next day, we went to the Fairgrounds and took it all in.  It was just incredible.  We saw the T-Birds again, Robert Cray

(with Roomful of Blues

backing him), and Walter "Wolfman" Washington

.  It was almost too much to take in at one time.  The other things I got to enjoy that trip were walking around the food booths (can't remember what I ate though) and the music tent, which was loaded with albums, CDs, and tapes of the musicians who were playing that year.  I do remember what I bought in the music tent that day.....a pair of keepers, Professor Longhair

, one of the Neville Brothers

' more forgettable releases.  If you're not familiar with Earl King, you probably know some of his songs, like "Trick Bag" (covered by Johnny Winter

, and others), "Come On" (covered by Hendrix

and others), "Big Chief" (by Professor Longhair

was King's "comeback" disc after an extended absence from recording and it sounded like he had never been away.  Here's King playing the Guitar Slim

classic, "The Things That I Used To Do" at the Chicago Blues Festival, probably from the late 90's.


I also picked up a program at that year's Fest, which was a great move because it had articles about some of the acts, mini-bios of all of the performers, and an ad for a music catalog that I soon ordered that exposed me to even more great music.  By the time the '88 Fest rolled around, I was more familiar with many of the performers.  The next year, we saw the Dirty Dozen Brass Band

, the Nevilles (who had guest appearances by Jimmy Buffett

and Ed Bradley of 60 Minutes fame) and Robert Cray

on the riverboat show and got to see Deacon John

and a couple of local jazz groups at the Fairgrounds earlier that day.

Even though New Orleans has a strong blues background, there is much more musically to the city and region than blues, like funk, zydeco, dixieland, gospel, reggae, and of course, jazz.  Jazz Fest always features some of Louisiana's finest zydeco bands, like Nathan and The Zydeco Cha Chas

.  Buckwheat Zydeco is one of the more prolifically recorded zydeco artists and has enjoyed wide popularity since the mid 80's.  He even opened for Eric Clapton

during Clapton's 1989 Tour.  Here's a clip of Buckwheat Zydeco from the 2007 Jazz Fest that really captures the essence of the Jazz Fest and zydeco music. It's hard to sit still while watching it.


Of course, everyone remembers the great New Orleans R&B of the 50's, 60's, and 70's with artists like Fats Domino

, and so many others.  For many folks, Jazz Fest was the only opportunity to see a lot of these performers, many of whom still had plenty in the tank when they appeared.  Sadly, many of them have either passed on or rarely appear any more, but there are still a few hanging in there, like Ford, Henry, the Dixie Cups

One of the bands keeping the R&B scene alive in N.O. is the Neville Brothers

.  All of the brothers have roots in the earlier R&B scene.  Everyone knows Aaron and his role in popular music even today.  Art played keyboards on many sessions and led the legendary group, the Meters.  Charles played saxophone and youngest brother Cyril was also a member of the Meters.  The brothers finally came together in the mid 70's after they all contributed to the classic Wild Tchoupitoulas

album and subsequently formed their own group.  Since then, they've recorded as a group, and also branched off into individual projects, giving everything they do that special New Orleans and Neville flair.  Here's an appearance by the group at the 2008 Jazz Fest singing their standard, "Fiyo On The Bayou."


Other places you have to check out while at Jazz Fest are the Jazz Tent and Gospel Tent.  Believe me when I tell you that some of the Crescent City's greatest singers are never heard in clubs or juke joints.  You can only hear them in the churches.  I have heard some incredible gospel singers during my visits to the Gospel Tent.  Also, in recent years, there have been more and more mainstream, non-N.O. acts appearing.  This year will feature artists like Lionel Richie

.  While those guys are okay, let's face it, you can see them almost anywhere else besides N.O.  While you're at Jazz Fest, you really need to check out bands like Trombone Shorty

, and all the other regional acts.  That's where the surprises are found.

And the food.......outstanding.  I promise you'll spend at least 30 minutes trying to decide which food booth to hit.  For me, the best was the Crawfish Bread and Sausage Bread, but man oh man, is there plenty to choose from.  Work it out so that you can take in two meals while you're there.  You'll thank me later.

I haven't been in several years, but my favorite days to go were on the Thursday or Friday of the second week.  It was usually less crowded and there were more local performers on hand.  Because it was less crowded, it was easier to go to the craft areas and talk to the artists.  There's something for everybody at the craft booths, but one of the coolest craft areas was where the Mardi Gras Indian costumes were being made.  Even better, there were shorter lines at the food booths.  Whatever day you decide to go, you are guaranteed to find something that interests you and to have a great time.

Since this blog is called Friday Blues Fix, it's only fair that we close out with some stellar New Orleans blues today.  Here's the irrepressible Walter "Wolfman" Washington

, who got his start playing on some of the great New Orleans R&B recordings in the 60's.  He spent many years backing Crescent City soul man Johnny Adams

Until next week, keep on listening to and playing the blues, wherever you might be.