New Blues For You - Literary Edition

This week, your humble correspondent has been away on business, working on professional development for his real job.  Therefore, discussion and thoughts about the blues have been few and far between for a few days.

During the summer, I picked up a few books to read during my idle time, then I realized that I didn't have any idle time.....well, not much anyway.  I managed to finish a couple of interesting blues-related books that would be well worth any other blues fan's idle time.  I picked up about five or six books this summer, thanks to a couple of Amazon birthday gift cards, and picked up another one to review for Blues Bytes in an upcoming issue.  We discussed Sliding Delta a few months back and talked with its author, William Baldwin, but these next couple of books are what I read after I finished that great book....... 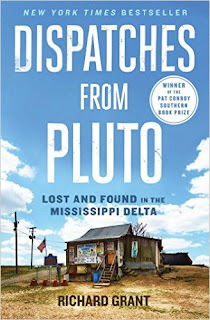 A few months ago, FBF contributor Joe suggested that I read Dispatches From Pluto:  Lost and Found in the Mississippi Delta, by journalist Richard Grant.  Having lived in a cave for the past few years, I was unfamiliar with this book, but I found it in a book store during my birthday shopping this summer and picked it up.

A few years ago, Grant visited some friends from Oxford, MS and went with one of them to visit her family farm in Pluto, MS.  He fell in love with his friend's father's old home, a plantation home in a very isolated setting, and ended up buying the house and property, actually doing so before his girlfriend had ever even seen it.

Though there is some focus on the blues in various chapters......Grant has a house party and invites a particular blues man to entertain and there is also a bit on a couple of other aging musicians.  The real focus is on Grant and his girlfriend's adjustment to living in Mississippi.  Grant is a great writer and that shows pretty regularly because he's able to tell the story so clearly and descriptively.  The characters at times seem to have sprung fully developed from a Faulkner novel, but I know people just like them and have all my life.  Their hospitality and generosity and remarkable to Grant and his girlfriend, who are used a city environment.

As a lifelong Mississippian, I found myself nodding and laughing at some of his discoveries and realizations, but some others really made me stop and think.....particularly in race relations.  I live about 25 miles or so from where the Civil Rights workers were slain in Philadelphia and I know that things have changed as far as race relations go......a lot, but I also know that, like everything, there's always room for improvement.  It's interesting to see this from the perspective of someone who is not a native.  The good thing is that he is very fair and clear in his assessment of relations.  It serves as a good read for Mississippians and for non-residents because it, hopefully, eliminates some of the stereotypes that have plagued the state for many years.  It's a very interesting book and there's is a focus on the blues and the environment from which it emerged. 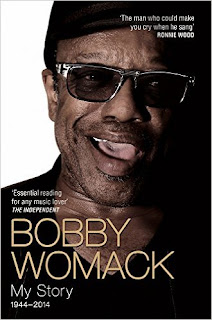 I had been looking for a copy of Bobby Womack's autobiography for a couple of years and finally found one this summer.  My Story is exactly that, as written by Womack with Robert Ashton.  Womack tells his story from his early days as a kid in Ohio, one of five sons of a deeply religious mother and father, who steered them into gospel, where the were billed as the Womack Brothers.  The group, accompanied by their mother and father, who played organ and guitar, respectively, soon attracted the attention of Sam Cooke, who signed them to his SAR Records label, where they eventually evolved into the Valentinos and enjoyed some success on the pop and R&B charts, all of which came to a halt after Cooke's untimely death.  Womack recounts his early family life, his close relationship with Cooke (and nearly career-ending marriage to Cooke's widow, scant months after the singer's death).

Womack is fairly forthcoming about his life, his decisions (good and bad and really bad), but not particularly introspective about a lot of it.  There's not much soul-searching behind it.....at least not as much as you usually see in these type of books.  There's a lot of discussion about his relationships and family, plus some fascinating tales about his time performing and traveling with Cooke, Ray Charles, Wilson Pickett, Ike Turner, and Sly Stone.  There's also stories about Womack's days working with and hanging out with the Rolling Stones, the Faces, and a surprising story about Womack's encounter with Janis Joplin (on the last day of her life).  Music fans may find the lack of detail a bit frustrating.....he skims over quite a bit of it, but the stories throughout are fascinating.....sometimes funny, sometimes heartbreaking.  It seems a bit rushed and thrown together at times, and would have benefited from a little more detail and editing, but as a Womack fan (though he is a member of the Rock n' Roll Hall of Fame, I still think he's criminally underrated as a musician, composer, and singer), I enjoyed reading it.  It's probably as close as we'll ever get to knowing him. 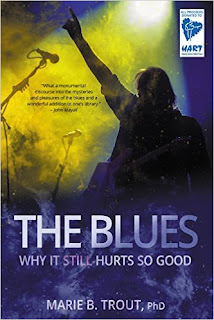 I just started reading this several days ago, so this is more of a preview than a review, but trust me, FBF will be revisiting this book in the near future.  Marie Trout is the wife and manager of blues guitarist Walter Trout, and while she doesn't sing or play the blues, she probably understands the blues as well as anyone.  From what I've read so far, The Blues - Why It Still Hurts So Good is a study that seeks to explain what makes a person love the blues.  From what I've read so far, which isn't very far into it, there are different things that draw different fans to the blues.  So far, it has been pretty entertaining.  I understand that this was part of Dr. Trout's fulfillment of requirements to get her PhD, but it doesn't read like a dry research paper or study.  I'm really excited about getting deeper into it, and I plan to discuss it here at a later date.