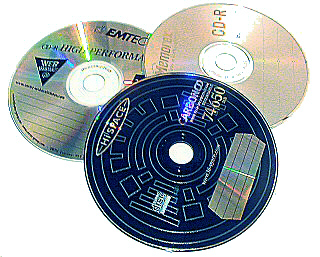 One of the things that people like about the blues is that the songs usually are about subjects that everyone can relate to.  Just about everybody has experienced some sort of heartbreak (or caused a little bit), lost a job, lost all their money, or any number of other hard luck stories....and there have been hundreds or thousands of songs written about those subjects over the years.  The trick is to make it interesting when you sing about it, put your own personal twist on it......something that will make it stand out in the blues fan's mind.  These days, with nearly a century of blues songs recorded (and a healthy number of songs written before the recording days), it's really a challenge for new songwriters to come up with a fresh take on these subjects. 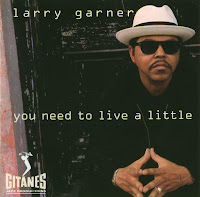 In the mid 90's, I found an album by one of the new faces on the blues scene:  Baton Rouge resident Larry Garner.  I had read about him in Living Blues several times, but it was really hard to find any of his music in a record store back in the pre-internet days.  He had only recorded a couple of albums on one label, the British label JSP, and there were hard to find in my neck of the woods.  However, in 1994, Garner released You Need To Live A Little on the Gitanes Jazz subsidiary of Verve Records. During this period of the 90's, Verve released several blues albums from a diverse group of blues artists like Johnny Copeland, Gatemouth Brown, Lucky Peterson, Joe Louis Walker, James Cotton, Buddy Scott, and Larry Garner.

That's a solid group of artists and all of those albums were enjoyable, to be sure.  Garner's was my favorite though.  I liked his guitar playing and the arrangements were creative, but the songs were the thing.  He wrote about everyday life events, things that might seem mundane to some folks, but to folks who were dealing with the type of things he wrote about, it was really cool to hear that somebody else was not only dealing with those things, too, but also writing songs about it.  Even familiar blues subjects were given a unique and fresh spin. 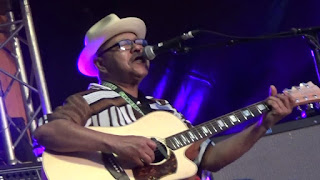 If you happen to follow Garner on Facebook, a lot of his observations sound like future songs.  He has a very common sense approach to addressing things, whether it's traveling to other land and meeting their residents, hanging out with his friends and mentors at home, dealing with family issues, or just making observations about life, food, and even politics.  He's got to be one of the most down to earth guys in the blues world and always has a minute or two for a fan, even this one.  He's actually agreed to do three different interviews for this blog, including the very first one!!

For our Blues Fix Mix CD, I had to include a Larry Garner tune, and I included what is one of my favorite of his tunes from You Need To Live A Little, "Four Cars Running," which finds Garner up to his neck in trying to keep up with his family responsibilities, including maintaining the vehicles of all of his family members.  This was always an amusing song to me, but never more so than in the last few months, when I suddenly found myself trying to.......you guessed it......KEEP FOUR CARS RUNNING!!  Dads all over the place (and Moms, too) can definitely relate to this tune.  It's nice to hear that we're not alone.  Here's Track Six of our Blues Fix Mix CD.......Larry Garner's "Four Cars Running."