A Pair of Windy City Gems

I've been listening to a lot of older blues since we've had a fair amount of spare time over the past year or so....more or less revisiting some old CDs that I picked up many years ago.  My recent adventures at the Little Big Store, finding several nice collection of country blues artists pre- and post-war, have more or less led me into checking out some of the great music between the 30's and the 60's, some of which I've shared with you on previous posts.

Last summer, I found a CD version of some of Professor Longhair's earliest recordings called Mardi Gras in New Orleans.  It was released on a St. Louis label called Nighthawk Records, which has been shut down for over 20 years.....it shifted from blues to reggae in the early 80's, but continued to re-release the occasional album until they went under (the blues catalog was purchased by Omnivore Records in 2017).

I wrote about Fess' album here in December (which is wonderful, if you can find it), but one of the things that I noticed in the liner notes was a list of Nighthawk's other releases at the time (1990).  Among those were several collections of early Chicago blues, Memphis blues, and Detroit blues.  Upon further research on my part, I was a bit disappointed to find out that only a couple of these were actually released in CD format, the rest are just about impossible to track down at this point some thirty years after the fact.  However, I decided to make an effort, eventually successful, to track down the two CDs available (though long out of print). 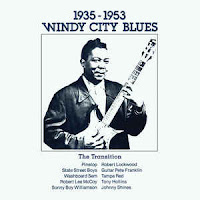 Windy City Blues 1935 - 1953:  The Transition is a fantastic set that collects a wide variety of rarely-heard early recordings from some of Chicago's finest artists of the time.  Robert Lee McCoy (later known as Robert Nighthawk) is featured on 1935's "Prowlin' Nighthawk," the song that gave him his later stage name.  There are also two 1938 tracks from Sonny Boy Williamson (V. 1.0), Johnny Shines' "Please Don't" from 1953, four tracks from Robert Lockwood, Jr. (two from 1941, his first session, and two from 1953), and a late-career track (1951) from the great Tampa Red.  Other artists featured on the set include Aaron "Pinetop" Sparks, the State Street Boys (a sort of "all-star" band that included Big Bill Broonzy, Jazz Gillum, and Carl Martin).

For the CD, there are eight bonus tracks (I'm assuming from some of the other LPs that didn't make it to the CD format) from Willie Nix, Floyd Jones, John Brim, Lazy Bill Lucas, and J.B. Hutto.  Some of these tracks exceed the 1953 end date by a couple of years, but that's not a problem because these tracks are as good as the original 16 tracks.  Altogether, there's a whopping 24 tracks of great pre- and post-war Chicago blues that are as good as any you'll hear from any of the better-known labels of the time. 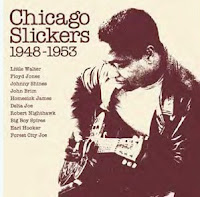 A few weeks later, I found Chicago Slickers 1948 - 1953, which covers a fewer number of years, but the music is no less potent with early sides from Little Walter ("Just Keep Lovin' Her"), Floyd Jones ("Hard Time"), Forest City Joe, John Brim, Earl Hooker, Johnny Shines ("Ramblin'"), Homesick James, and the newly-dubbed Robert Nighthawk ("Maggie Campbell").  This set also includes eight bonus tracks from Little Walter, Nighthawk, Willie Nix, Shines, and Man Young (a.k.a. Johnny Young).  These sides were recorded for long-forgotten small labels like Parkway, Tempotone, and Random, but they're as powerful as any of these artists' later recordings for bigger, more successful labels in the Windy City.

It's tough to choose which of these albums is the best buy because they're both so good.  Chicago was truly loaded with some incredible talent during these three decades, some of which were not able to catch a break and enjoy a measure of success similar to Little Walter, Muddy Waters, and Howlin' Wolf.  Some were able to enjoy success much later in their careers and many of them served as influences for later artists.  However you look at it, if you are into the classic Chicago blues of the 50's and would like to hear some of the early pioneers and influences of those artists, these are two most excellent collections.