In Case You Missed It.......The Hook and the Prince of Darkness 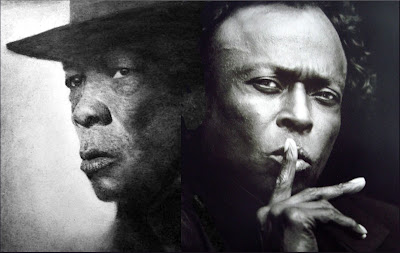 A couple of years ago, one Sunday afternoon, I stumbled across a movie called The Hot Spot.  Since I caught it at the beginning, I started watching it, but after a while it became one of those train wreck movies where you just couldn't take your eyes off it despite your best intentions.  Yep, it was two hours I won't ever get back, a really bad movie that was trying its best to imitate those 50's film noir movies...just a bad experience, or at least it was until the credits started rolling.

The end credits were backed by this funky boogie blues rhythm with a muted trumpet playing over it.  For the first time during the entire movie, I was riveted to the screen......who was playing this wonderful music??  It sounded like Miles Davis on the trumpet.....I'm a huge Miles Davis fan, but I couldn't imagine him playing on the soundtrack of this movie.  I decided to search to find out just who was behind this great music.

Lo and behold, it was indeed Miles Davis, the Prince of Darkness, playing on this track.  Not only that, he was being backed by John Lee Hooker on this particular track and the great drummer Earl Palmer, along with slide guitarist extraordinaire Roy Rogers and another legend, Taj Mahal.  Through further research, I discovered that Miles played on most of the soundtrack and was backed on other tunes by slide guitarist Roy Rogers and Taj Mahal.  The soundtrack was also available on the Antilles label (a subsidiary of Island Records), though it was out of print.  I tracked down a copy of the soundtrack (which actually cost more than the DVD, which was apparently also out of print....can't argue with that).

I've been a fan of Miles Davis since my early twenties (I posted here about his first quintet many years ago).  Like many jazz musicians of his day, the blues permeated every note of his music, especially in his early career.  In his later years, and this music was some of the last that he recorded, he made a return to more blues influence in his music after his torrid fusion period from the late 60's to the mid 70's.

Despite being aware of the blues influence in his music, it never occurred to me that Davis would play with any other blues artists, let alone John Lee Hooker, but based on the quote above, Davis respected Hooker's music immensely, and the tracks on which these two collaborate really cook.  No one, I mean NO ONE, worked a groove like the great JLH and Davis' trumpet over this nasty, greasy, Delta groove is just wondrous.  Of course, with a rhythm section like Palmer and bassist Tim Drummond, two of the finest to play their respective instruments, there's no way to go astray.

Rogers and Taj Mahal's contributions are equally fine, but just in case you missed it, this was Miles Davis and John Lee Hooker......two of the giants in their respective musical fields......coming together and making it count, even if it is on the soundtrack of a most forgettable movie.  The soundtrack to The Hot Spot is certainly not forgettable in the least and if you like blues or jazz, track down this CD.  You can skip the movie though.