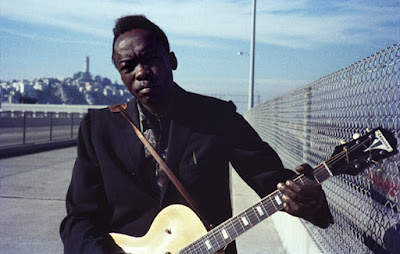 I first experienced John Lee Hooker on The Blues Brothers movie, playing on the street during the Maxwell Street scene.  I thought it was the coolest thing....I loved his gruff vocals, that driving boogie beat, and the "How How How How" growl.  I definitely wanted to know more about him once I saw and heard him.
I actually got to see him in person a few years later at the New Orleans Jazz & Heritage Festival.  It was back in the days when they did night shows on the Riverboat President.....around 1987, I guess.  He opened for The Fabulous Thunderbirds, who were hosting a revue-type show with blues artists ranging from Lazy Lester and Katy Webster to Dr. John, Roomful of Blues, Duke Robillard, and Bonnie Raitt.

As impressive as that lineup sounds, I was more impressed with Hooker, sitting on a stage all by his lonesome, playing in front of a couple thousand people, who remained basically silent during his performance (something that you don't always get to experience these days at live shows.....not sure why people pay big bucks to hear an act and then they don't even bother to listen to said act).  He was mesmerizing.

Since that performance, I've been a fan.  Over the years, I've picked up several albums and I listen to him a lot, but it seems like mostly late at night.  Thirty years ago, when I used to drive around late at night on hot summer nights down dusty dirt roads (pre marriage and family), I loved to listen to a cassette of John Lee Hooker.......that seemed to be the best setting for his moody brand of blues.

The hardest thing for me to do this week was pick out just three essential recordings by Hooker.  The man recorded an unbelievable number of songs over a half century of performing.  As on our previous "essential recording" posts, we limit it to single-disc sets.  Also, remember that these are FBF’s essential three.....your essentials may be different and we'd love to hear from you about your choices. 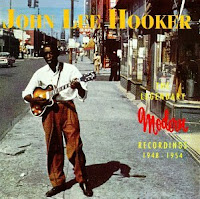 The Legendary Modern Recordings 1948-1954 (Ace UK):  Hooker recorded frequently from the start for different labels under different names, but from 1948 until 1954, he recorded for Modern Records and these two dozen sides represent some of his best work, including three of his biggest songs ever, "Boogie Chillen," "Crawling Kingsnake," and "I'm In The Mood."  I love Ace UK's diverse collection of recordings and their informative liner notes are always worth a read.  This is one of their best efforts and there's not a bad track to be found here.  This set is well worth the search. 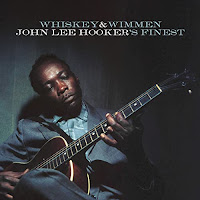 Whiskey & Wimmen:  John Lee Hooker's Finest (Vee-Jay/Concord Music Group):  The set was released in celebration of Hooker's 100th birthday in 2017.  It's a nice single-disc set that covers the period that Hooker was recording for Vee-Jay, Stax, Riverside, and Specialty Records.  Lots of familiar tunes here.... "Boom Boom,"  "Dimples," "It Serves Me Right," "Big Legs, Tight Skirt," and remakes of the three mentioned on the Modern release.  These cover about a ten year period after the Modern set as Hooker was honing that unique sound.  Powerful stuff. 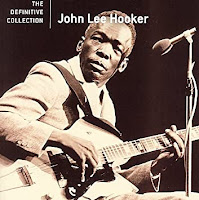 The Definitive Collection (Hip-O/Universal):  A few tracks overlap on this 20-song set, but this is probably the most comprehensive collection of his best work, covering those late 40's Modern recordings all the way to his last collaborations in the late 80's and 90's with Carlos Santana and Bonnie Raitt.  It also collections tracks from a few other labels not collected on the above two recordings......Chess, Impulse, ABC-BluesWay, among them.  If you get this one first, you'll certainly want to grab the other two afterward.....and probably even more after that.
It's really difficult to just pick three recordings of John Lee Hooker......and truthfully, you shouldn't limit yourself to just three.  These should simply be a starting point.  His music seemed to be simple enough upon listening, but when you think about it, there are no true imitators of his style.....nobody really plays the blues like he did.  He was truly in a class by himself.