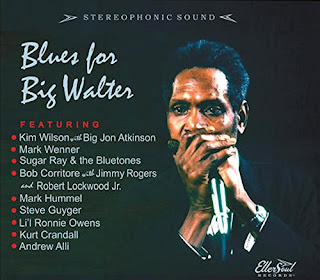 In March, EllerSoul Records released Blues for Big Walter, a wonderful and loving tribute to one of the genre's most underrated harmonica players, Big Walter Horton.  Compiled and produced by longtime harmonica ace Li'l Ronnie Owens, this is a fantastic set of tunes from some of the genre's current harp wizards.  Current stalwarts like Kim Wilson (with Big Jon Atkinson), Nighthawks front man Mark Wenner, Mark Hummel, Steve Guyger, and Sugar Ray Norcia joins forces with up-and-coming players Kurt Crandall and Andrew Alli to play a mostly-familiar set of blues standards, many associated with Horton.  Another harmonica veteran, Bob Corritore, appears on two vintage recordings that feature a pair of Horton contemporaries, guitarists Jimmy Rogers and Robert Lockwood, Jr.  It's a fantastic listen for anyone who digs traditional blues and harmonica played well. 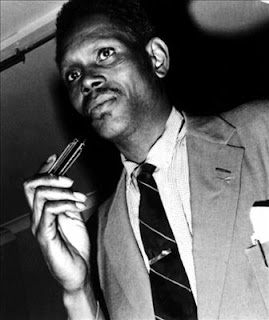 Friday Blues Fix paid tribute to Horton as part of the quartet that made up our Blues Mount Rushmore of harmonica players a couple of years ago, but he's certainly deserving of a lot more attention.  As a harmonica player, he had few peers, and few imitators.  He was a master of timing and tone (almost horn-like), both of these qualities are instantly recognizable in his music, and he was as adept an accompanist, backing such blues stalwarts as Robert Johnson, Muddy Waters, Otis Rush, Tampa Red, Jimmy Rogers, Honeyboy Edwards, and Johnny Shines, as he was a solo player.

Born in 1917 in Horn Lake, MS, he learned to play the harmonica by the time he was five years old.  His family had moved to Memphis by that time, and Horton also learned from two of the city's harp masters, Will Shade and Hammie Nixon.  Horton claimed to have recorded a couple of sides with the Memphis Jug Band in the 20's.....possibly so, since he did play with them during that time as a preteen.

In the 30's, he backed many of the artists listed above.....Johnson, Edwards, Shines, and Homesick James Williamson, even venturing north to Chicago for a time, where he backed a guitarist named Charlie "Little Buddy" Doyle on a few sides for Columbia Records.  Horton also claimed that he began to experiment with playing amplified harmonica during the late 30's/early 40's.  If this claim is true, then that would make him one of, or the first to play in an amplified setting.

Horton suffered from poor health throughout most of the 1940's and actually stopped playing harmonica for most of the decade, working odd jobs and giving the occasional lesson to musicians like Little Walter and Sonny Boy Williamson II.  In the late 40's, he returned to playing, backing B.B. King and Eddie Taylor while recording solo sides for Sam Phillips.  These were farmed out to Modern/RPM Records and released under the pseudonym "Mumbles," which was a name that Horton hated. 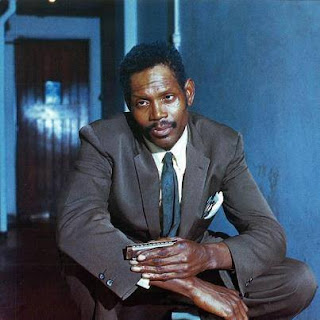 Around 1953, Horton hooked up with Muddy Waters and recorded and toured with him for a year after Waters' regular harp blower Junior Wells was drafted.  After one session, he was fired from the band, either for drinking too much or doing too many side gigs.  By that time, he was entrenched with Chess Records as a session player.  He also found time to return to Memphis to record for Phillips with Sun Records, including the classic instrumental "Easy."  In addition to his recordings with Chess and Sun, Horton recorded for Cobra, States, and Jewel Records during the 50's.  Horton's distinctive harmonica can be heard on several Windy City classics, such as Jimmy Rogers' "Walking By Myself," Otis Rush's "I Can't Quit You Baby," and Johnny Shines' "Evening Sun." 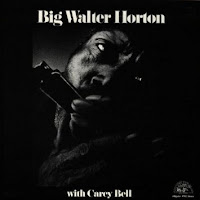 Horton continued to be active into the 60's, recording a full album for Chess, The Soul of Blues Harmonica, which featured Buddy Guy on guitar.  He also contributed several sides to the third volume of Vanguard's Chicago/The Blues/Today! series.  Those sides were some of Horton's best recorded work, and also featured one of Horton's prize students, Charlie Musselwhite.  During the 60's, Horton also worked and recorded with Rogers, Shines, Sunnyland Slim, Robert Nighthawk, and another pupil, Carey Bell, with whom he recorded the wonderful Big Walter Horton With Carey Bell LP for Alligator Records, the label's second-ever release, in 1973.


Also during the 70's, Horton performed with Willie Dixon's Blues All Stars on numerous tours of the U.S. and Europe.  He also toured solo off the success of the Alligator release with Bell, and backed Muddy Waters on his I'm Ready album in 1977.  During the same period, he recorded two excellent solo CDs for Blind Pig, Fine Cuts and Can't Keep Lovin' You,  A regular performer at the famed open-air market on Maxwell Street in Chicago, Horton also appeared briefly in the street scene of 1980's The Blues Brothers, backing John Lee Hooker.

Horton passed away in 1981 of heart failure,  Although he was widely respected among his peer, he never became the major figure he could have been due to several factors.  First, he simply lacked the temperament to be a band leader or session leader due to his extremely shy nature.  He also drank heavily and had trouble holding on to his money.  Fortunately, he still managed to work steadily for several decades, appearing on many of the classic blues recordings of the 50's, 60's and 70's and making some fine recordings of his own at the same time.

Blues for Big Walter is highly recommended.....there are some terrific performances by many of the blues' finest current harmonica players, with a few surprises along the way.  However, it is also highly recommended that listeners check out some of Horton's own recordings.  Chances are good that you already own many sides that he backed other artists on, but his own recordings are also a treat as well.