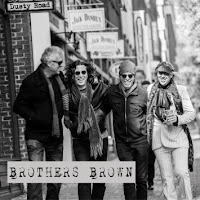 The Brothers Brown are a unique new band that seamlessly blend blues, rock, and R&B.  If you're a fan of classic tunes from artists like Boz Scaggs, Creedence Clearwater Revival, the Band, or Little Feat, you will most definitely enjoy the band's recent debut album on Funky Joint Records, Dusty Road.

On their album, the band featured a rock solid rhythm section, David Santos (bass/guitars) and Pete Young (drums), and a pair of front men, both named Paul Brown.  The first Paul Brown is based in Los Angeles (L.A. Paul Brown) and is a two-time Grammy winning singer/guitarist/songwriter.  The second Paul Brown is based in Nashville (Brother Paul Brown) and has been nominated for a Grammy as a keyboardist/producer/songwriter for blues legend Bobby Rush.  They also enlisted the great Little Feat guitarist Paul Barrere as slide guitarist on one track and another Little Feat alum, bassist Kenny Gradney, has replaced Santos in the band since the album's release.

One amazing fact about Dusty Road is that the four parties who made the album were NEVER in the same room while recording the album.  Despite that, the performances and instrumental interplay are remarkable, mainly because all four have roots in the same musical soil......blues, jazz, rock, and soul.  All those genres are found on this outstanding new album.

If you're a fan of any of these genres, or the artists cited in the first paragraph, Dusty Road is an album that you should be seeking out.  But......before you do, check out Friday Blues Fix's Ten Questions with the two Paul Browns.  FBF thanks the Browns for taking the time to discuss their new album, their musical backgrounds, their influences, and their future plans, which hopefully include much more great music.

Ten Questions with the Brothers Brown

Friday Blues Fix:  For starters, can you tell us about your musical backgrounds?

L. A. Paul Brown:  I started on drums at an early age, then in my teens took guitar lessons from a couple amazing teachers…… Ted Green and Tommy Tedesco.   Even in bands as a drummer, I was writing the songs and arranging them.   First real pro gig was drumming for Long John Baldry, a blues singer from England.  Started working in the recording studio in my twenties for Warner Brothers, engineering and later producing.

Brother Paul Brown:  Man, in 1975 at the age of 12, I’d landed in a school for the Homeless in Nashville, TN after my Mom died from a drug overdose.  It was there that an old upright piano found me and surely saved my ass and pulled me through so much.  By my third year in High school I was playing every instrument I could get my hands on -mostly piano and trumpet, though.
At 17 I ran away from that school, hitchhiked back to Memphis with a road map and a trumpet country legend Louise Mandrell gave me for my birthday.  After about ten years’ worth of crazy struggles and living in most every park in Memphis, I landed my first publishing deal and started growing my engineering and producing wings.  During that time I landed some pretty life-altering soul gigs with Stax legend Shirley Brown and Hi Records soul legends Ann Peebles and Don Bryant.  From there, the list of artists and musical genres has flourished on levels I’d have never imagined.


FBF:  So, how do we tell the Paul Browns apart?

L.A. Paul Brown:  L.A. P.B. is about a foot taller with salt and pepper hair. Brother Paul is a blonde sex god

Brother Paul Brown:  L.A. Paul’s is like a totally hip super tall pepper haired Ward Cleaver whom you’d’ve never imagined co-engineered the first Van Halen album.  Me?  Man I’m the cat who never let go of the ‘70’s and I wear the threads to prove it.

FBF:  Growing up, who were some of your musical influences?


FBF:  How did Brothers Brown come to be?

L.A. Paul Brown:  I had wanted to start a blues band and play the style music I grew up listening to and playing. I had met Brother Paul on Facebook and knew he was a great blues B3 player and producer. My manager encouraged me to get out of L.A. and play with guys I didn’t know to do something completely different than I had been doing. I reached out to Paul and we starting formulating a band idea. Then called David Santos to play bass, and he brought Pete Young on board to play drums. We got a little gig in Nashville to see if there would be any magic, and bam, we vibed from the first note.

Brother Paul Brown:  Ok, Just for the record, I’ve never considered myself a Blues cat and quite honestly wasn’t ever even that interested in the genre (In the purest sense – I repeat  IN the purest sense) In the last part of 2001 I’d actually just ended a 2 year stretch with the Rock Icon Jimi Jamison (R.I.P.) and Survivor ("Eye of the Tiger") and had found myself in between gigs.  Then out of nowhere I get a call from Blues legend Bobby Rush who had seen me play over the years with Ms. Brown and Ann Peebles.  I jumped in without blinking twice and although Bobby is a poster child for “The Blues” right off the bat.....loved how he had this insanely funky left of center approach and anyone who knows me KNOWS I’m left of center.  We hit it off and before I knew what hit me in the head I was making my first full on blues funk album with Mr. Rush (Show You a Good Time).

Fast forward to 2014.  Three Bobby Rush Blues albums later I’m finding myself at the Grammys with a nominated album in a category I never even considered myself that connect to......BLUES!  It was there that I met up with L.A. Paul who, while I was mentally ready to get away from “The Blues,” was dying to play “The Blues”!   We hit off super-fast though and within one hang, L.A, Paul had me convened to put a killer band together so he could fulfill his “Blues Destiny”.   During that conversation I remember saying “Man I’m done with the Blues for a while”. He says “Man you can’t outrun The Blues.”  I said “Man watch me.” I lost that bet…   L.A. Paul called a killer bass player in Nashville, David Santos, who then called drummer Pete Young and started writing and flying all the crazy brilliant ideas that stretched so much further than just “The Blues”


FBF:  One of you is based in L.A., the other in Nashville?  What are the differences in the musical environments between the two cities?

L.A. Paul Brown:  L.A. is a real hybrid of genres, including the movie and TV biz. Nashville is more country , blues, Americana

FBF:  How difficult is it to record an album when all four of the musicians involved are never in the same studio (or city) together?

L.A. Paul Brown:  With the right cats, it can work. We went into it thinking these recordings would act as demos, and when the time was right, we would get in the studio together and cut them again. But we ended up loving the way they came out and just decided to put it out like this. There’s a lot of personality in each part.

Brother Paul Brown:  For me, this album and these four beautiful cats……it was incredible easy and, even more bizarre, very natural.  Every time I put on the cans to cut a Hammond B3 or keyboard track, it always felt like I was in the same room with the guys cutting.


FBF:  Can you tell us about how some of the songs on Dusty Road were created?

L.A. Paul Brown:  David Santos and Pete Young would go into the studio and lay down some great grooves and send them to me. I would sing and play guitar and send to Brother Paul to do the keys, then get all the tracks together and mix them in LA.

FBF:  How would you define your particular brand of blues?  It’s really a hybrid of several different styles...blues, of course, with a little New Orleans, a little Memphis, a little blue-eyed soul.  Which blues artists/bands (or other genres) do you think influenced the sounds of the album the most?

L.A. Paul Brown:  We are all influenced by various bands and solo artists and we let those influence run freely when writing and recording.  Didn’t want to be an all blues band, and hope that the many layers of styles will appeal to the listener the way they do to us.  For me, it was the Grateful Dead and Clapton I listened to as a kid.

Brother Paul Brown:  Again, I second L.A. Paul……an Americana hybrid and the truest musical snapshot of where we all come from musically.

FBF:  What kind of music do you listen to in your spare time?  You’ve both worked with a lot of different artists and in different genres, so I assume your record collections are pretty diverse.

L.A. Paul Brown:   I like R&B singers like Luther, Aretha ….. Don’t find myself listening to blues generally except on Saturdays in LA on the radio, “Nothin’ but the Blues.”

Brother Paul Brown:  Man, I rarely go out and buy or sit down and listen to blues albums.  What I find myself listening to a lot at the moment are Native American flute, New Age, super-exotic Indie and Crooner albums.

Listening to “Out of the Fog,” by Mel Torme right now.  Man what an incredible voice...

FBF:  Is there anything in music that you haven’t done, or anyone that you’d like to work with?

L.A. Paul Brown:  I like Ed Sheeran a lot, and still love Aretha and would love to do a jazz record with her.

Brother Paul Brown:  Man, I'd LOVE to make a record with and share the stage with Lou Gramm.


FBF:  What’s next for Brothers Brown?

L.A. Paul Brown:  Touring and more touring. We’ve recorded enough material for a second CD and part of a third, so we want to play shows all over the world to get as many people to listen to our music.

Brother Paul Brown:  I totally second L.A. Paul.  We've really got some amazing new music in the can including this ultra-vibed-up 15 minute piece!  We're really looking forward to the touring and taking our new fans along for this ride!