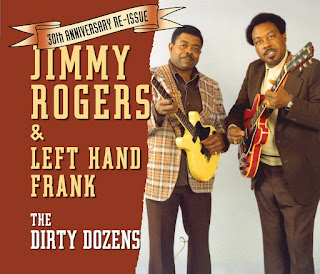 Several years ago, I heard a couple of tracks on an anthology collection from the UK label, JSP Records from Jimmy Rogers and Left Hand Frank Craig. It sounded like a fairly intimate session, maybe performed in a small English club. I think that was what captured my attention. There wasn’t a lot of musical accompaniment, bass and drums, and the focus was on Rogers and Craig.
It was recorded in the late 70’s, some of it in the 100 Club in London and some in JSP Records head John Stedman’s living room. The sound quality is not exactly pristine, but it is not bad. I’m not sure about the history of Rogers and Craig…..how long they played together, how often, etc….but they have an excellent musical rapport. Rogers was the second guitarist for years behind Muddy Waters and no one played that role better. He plays the same part behind Craig, a great lead guitarist who was criminally under recorded over his career.
JSP released the set a few years ago as The Dirty Dozens and it’s worth seeking out for fans of traditional Chicago blues. Rogers sings on nine of the fifteen tracks and most of these songs will be familiar to his fans. His vocals leave you with a warm feeling inside. Craig’s six songs are equally fine and they pair pulls out a completely unplanned, unrehearsed version of the salacious title track that’s a lot of fun, too. 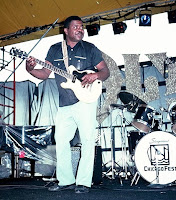 Craig, as the nickname implies, a left-handed guitarist, played with Rogers, Junior Wells, Jimmy Dawkins, and many others over the years over a quarter century. He ended up migrating to the west coast not long after these sessions, for health reasons, and passed away in 1992. He has a live album, Live at the Knickerbocker Café, that’s hard to find, plus four tracks on the first volume of Alligator Records’ Living Chicago Blues series, a four-volume set that should be in any blues fans’ collection. 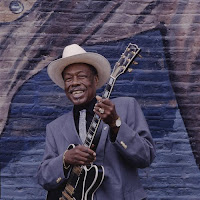 FBF did a profile of Rogers many years ago. He had a nice, two-part career, starting in the 40’s with Sonny Boy Williamson, Big Bill Broonzy, and Big Bad Smitty (as a harp player), and Waters and later enjoying some solo success with Chess before stepping back in the 60’s. He returned in the early 70’s and recorded several memorable albums for a variety of labels. He passed away in late 1997. If you’re not familiar with The Dirty Dozens and you like basic Chicago blues, this is a great set of blues to unwind with.
Posted by Graham at 12:01 AM