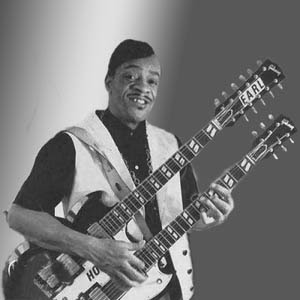 If you’ve been a blues fan for any amount of time, you have probably caught yourself thinking about how amazing the music scene must have been in Chicago during the late 1950’s, with guitarists like Muddy Waters, Howlin’ Wolf, Otis Rush, Buddy Guy, Freddie King, Robert Nighthawk, Elmore James, Magic Sam, Hubert Sumlin, Eddie Taylor, Robert Lockwood, Jr., and Jody Williams holding court at various locations on many nights. I know I have, and that list is really just scratching the surface. However, at the time, if you asked any of them who the best guitarist in Chicago was at the time, most of them probably would have said “Earl Hooker.”

Reportedly, an Earl Hooker performance once brought B.B. King to tears, as he told Buddy Guy, “No one can play a slide that clean.” Earl Hooker could. Not only was he an absolute master of slide guitar (and a serious disciple of Robert Nighthawk), he was also one of the more inventive and technologically advanced guitarists of the time. He was able to incorporate gadgets like the wah-wah pedal into traditional blues with little effort. He was also skilled at playing other musical styles besides blues, such as country-western, rock n’ roll, jazz, and even hillbilly.

Born outside of Clarksdale in the Mississippi Delta in 1929, Hooker was a cousin of another Mississippi blues man, John Lee Hooker. His parents moved the family to Chicago in 1930, so Hooker was exposed to a lot of music at a young age. He began playing guitar at the age of ten and improved quickly. He suffered from a speech impediment, stuttering, which he battled all of his life, which probably accounts for his lack of interest in singing. Unfortunately, his later success was limited because he was not so much a bad singer as a singer of modest ability or, more so, limited confidence, so most of his recordings were made with other people singing.  To make matters worse, he contracted tuberculosis during his youth, a condition that affected him all of his life.

Hooker started playing on street corners as a young teen and was influenced by T-Bone Walker, who played Chicago regularly. Walker was an influence both on his instrument, with his jazz-influenced blues licks, and his showmanship. Hooker also met Robert Nighthawk during this time, who taught Hooker how to play slide guitar. Hooker not only learned Nighthawk's crystal-clear style, but arguably, the  pupil eventually surpassed the teacher.  Eventually, in the late 40’s, Hooker travelled to Helena, Arkansas to play with Nighthawk. During this time, he also appeared with Sonny Boy Williamson II (Rice Miller) on Miller’s King Biscuit Time radio program. During this time, he began his "Road Warrior" ways, playing at clubs all through the south and even trying to set up a base in Memphis.

Hooker toured almost non-stop, hitting a regular group of clubs and roadhouses in the south stretching from Arkansas as far as Florida, sometimes within a day or two of each other. These long, difficult hours of driving, sleeping where and when he could, combined with the energy Hooker put into his performances, took a toll on his health, beginning in the 1950’s as his tuberculosis began to get worse and worse. 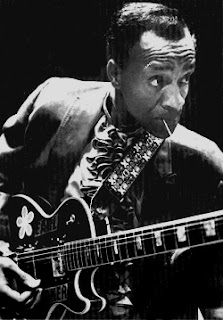 In the 50’s, Hooker began recording in Chicago for a number of labels, including King, Sun, Argo, Veejay, States, United, and others. He recorded as a front man (mostly instrumentals) and in support of others, like Pinetop Perkins, Arbee Stidham, Harold Tidwell, Boyd Gilmore, and The Dells.  Incredibly, many of Hooker's solo sides were not released at the time. Sun Records’ Sam Phillips sat on several Earl Hooker singles, including this cool instrumental, “The Hucklebuck.”

Hooker’s first vocal on record was a reading of the classic, “Black Angel Blues,” based on Nighthawk’s version and later covered by B.B. King and Buddy Guy as “Sweet Little Angel.” Another highlight was this instrumental for Argo, called “Frog Hop,” which mixes a little swing, early rock n’ roll, and blues.


Hooker suffered a major tuberculosis attack in 1956 and was sidelined for a while, but soon returned to his rigorous touring schedule of the south as well as various clubs in the Windy City. In the late 50’s/early 60’s, he teamed with longtime friend and associate Junior Wells on a series of songs for the Chief/Profile/Age labels. Hooker backed Wells on many recordings that became staples of Wells’ repertoire, including “Little By Little,” “Come On In This House,” “It Hurts Me Too,” and the classic “Messin’ with the Kid.”


Hooker basically became the Chief Records house guitarist during this time, backing Magic Sam, Ricky Allen, Lillian Offitt, Bull Moose Walker, and A. C. Reed. Hooker also recorded his own sides during this time, too…..some of his best, including “Calling All Blues,” which features some impressive slide guitar, the amazing “Blues in D Natural,” and his best-known song, ”Blue Guitar.”  For the latter song, Hooker was noodling around in the studio and didn’t even realize he was being recorded.


Hooker also recorded for other labels during the early 60’s…..Bea & Baby (including the instrumental, “Dynamite”), Checker, C.J., and an extended stint with Cuca in the mid 60’s that produced some of his most underrated work, including an excellent instrumental version of "All Your Love." In 1967, however, he suffered another tuberculosis attack that was put him in the hospital for nearly a year. He also recorded with Muddy Waters on a few tracks, one of the few times that the Delta blues great laid his slide down for anyone. Their partnership was highlighted by Hooker’s incredible slide work on “You Shook Me.” 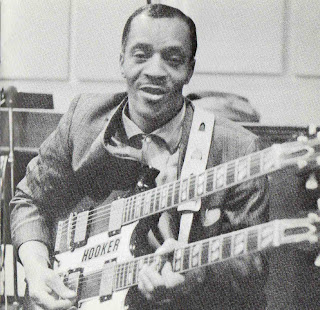 When Hooker left the hospital in 1968, he put together what many consider to be his best band (Pinetop Perkins on piano, Carey Bell on harmonica, Andrew “B.B.” Odom on vocals, and Freddie Roulette on steel guitar) and started performing in Chicago and touring again…..all against his doctor’s wishes. During this time, Hooker and his band recorded for Arhoolie Records and released the essential Hooker album, Two Bugs and A Roach. This album featured vocals by Odom, Bell, and Hooker. Among the highlights were a strong set of instrumentals, some of which took advantage of Hooker’s abilities with the wah-wah pedal (“Wah Wah Blues,” a sizzling duet between Hooker and Roulette), the jazz-influenced “Off The Hook,” and a reworking of Robert Nighthawk’s “Anna Lee,” with Hooker on vocals. His performance on this track alone is worth buying this album.

In 1969, Hooker was recommended by Ike Turner to Blue Thumb Records in California, where he recorded his own album and appeared on several others, including Charles Brown, Bull Moose Walker, Jimmy Witherspoon, and cousin John Lee Hooker. While these recordings were spotty at best, they all included some great moments with Hooker and his counterparts (Below.....with Charles Brown on "Driftin' Blues," and a improvised cut with John Lee Hooker, "If You Miss 'Im, I Got 'Im").

After the Blue Thumb sessions, Hooker returned to Chicago and played his usual haunts, even taking part in the first Chicago Blues Festival in 1969. In the fall of that year, Hooker joined the American Folk Blues Festival tour in Europe, playing twenty concerts in just over three weeks, travelling through nine different countries.  This grueling tour, combined with his California trip and the Chicago gigs over a short period of time, took a toll on his health, aggravated his tuberculosis, and he returned to Chicago and entered the hospital in December. He died in April of 1970, just 41 years old. 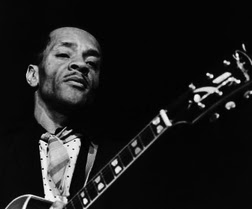 Though he wasn’t widely recognized at the time of his death, and is still not widely known today, he was regarded highly where it mattered…..by his peers. Many of them consider Earl Hooker to be the greatest modern blues guitarist of his time.

Whenever anyone dies young, fans are left to ponder what might have been and Earl Hooker is no exception in that regard. He continued to improve, develop, and create up until his death, so it’s obvious he still had plenty of great music ahead of him when he left us. 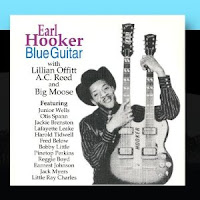 Though Hooker mainly recorded 45's until the last couple of years of his life, these sides have been collected numerous time for the most part.  Paula Records in Shreveport has compiled Blue Guitar, an excellent set of his Chief and Age recordings (solo and backing others), covering 1959 through 1963.  Hooker cut some of his best instrumentals during this period.  The sound is not the best on these recordings, but the superior music rises above the inferior sound. 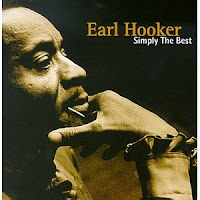 In the late 90's, MCA released Simply The Best, which spanned nearly twenty years of Hooker's career, from his days recording with Checker/Chess ("Frog Hop") through his tenure with Blue Thumb near the end of his life (with solo tracks and backing John Lee Hooker, Charles Brown, Big Moose Walker, Brownie McGhee, etc....).  This is a good, solid collection that fills some gaps. 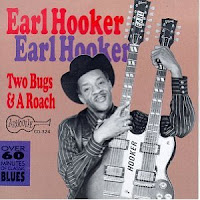 Arhoolie has a couple of excellent sets from his later period.  The previously mentioned Two Bugs and a Roach added a few tracks from early in Hooker's career when making the jump to CD back in the 90's.  It features Hooker with one of his best bands ever and is my personal favorite.  The Moon Is Rising is a mix of live and studio tracks and ranks with his best.  Either one of these is a great collection. 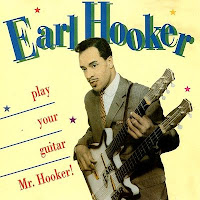 Some of Hooker's best tracks from his days with Cuca in the mid 60's were collected in the mid 90's on Black Top Records' Play Your Guitar Mr. Hooker!  Sadly, it's out of print, but copies can still be found online.  It's worth a listen. 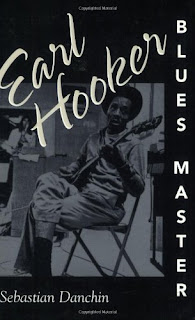 For more details on Earl Hooker's life, I highly recommend Sebastian Danchin's excellent biography, Earl Hooker, Blues Master.  It's a well-detailed account of Hooker's life and music that was 20 years in the making, with lots of interviews with fellow musicians and family.