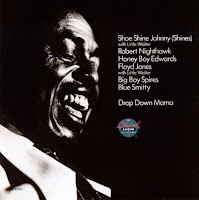 Since my recent trip to the Little Big Store, I've been on a bit of a classic blues kick, which is not unusual because I usually revisit a couple of times a year, but it usually consists of things that I already have in my collection.  Since my big finds a few weeks ago, I have picked up a few other classic sets, including the rest of the Masters of Modern Blues series on Testament Records, which we'll discuss in the near future.  I also paid another visit to the Little Big Store with some of my family, who loved it and want to go back again.  While there, I picked up a couple of other sets that looked interesting, including a re-purchase of a hard-to-find set from years ago.

When I started listening to the blues in the mid/late 80's, one of the indispensable sources of blues was MCA Records, which owned the rights to the Chess Records catalog and was re-issuing classic sets by all of the Chess luminaries of the 50's and 60's.  I picked up collections on cassette from Muddy Waters, Howlin' Wolf, Little Walter, Sonny Boy Williamson (Version II), and a six-volume set simply called The Blues, which was fantastic for a new fan of the blues, featuring songs by the four mentioned above, plus Buddy Guy, Chuck Berry, John Lee Hooker, Jimmy Witherspoon, Lowell Fulson, and many, many more.

It took me a couple of years, but I finally was able to track down all six volumes of The Blues.  They were short and concise and just a perfect starter set for this new fan.  Collections were such a great place to hear a lot of good blues from a lot of different blues artists really quickly....I found a lot of them back then and still like to find one now and again to introduce me to new artists and songs.

A few months after wrapping up that series, I found Drop Down Mama, another Chess collection that was made up of songs from the label before it became Chess, back when it was still called Aristocrat Records.  I wasn't very familiar with many of the artists that were featured....I had seen Johnny Shines and Honeyboy Edwards perform on Public Television, and I had heard of Robert Nighthawk, but had never actually heard him.  The rest of the artists, Arthur "Big Boy" Spires, Blue Smitty, and Floyd Jones were new to me.

Shines, who like Edwards, knew and occasionally played with Robert Johnson, was surely one of the most intense blues artists with his booming voice and his kinetic slide guitar playing.  His body of work, from the 40's through the late 60's/early 70's is amazingly, consistently good (we'll discuss him in a later post), and even after a stroke in the 80's limited his guitar playing, his voice was still strong.  "So Glad That I Found You" was recorded in 1950, with Little Walter and Jimmy Rogers providing musical support.

Honeyboy Edwards actually does the interesting title track and is backed by a full band.

As I said above, I'd never heard Robert Nighthawk before this set, but his stunning slide guitar just blew me away.  It's some of the crispest, cleanest slide you'll ever hear, and when I got to hear Earl Hooker a few years later, I knew who he listened to while growing up.  I had already heard B.B. King sing "Sweet Little Angel," and now I knew that King got his version from Nighthawk's "Sweet Black Angel," which is featured here, as well as his "Anna Lee," one of my favorites blues songs ever (the Earl Hooker version is almost as good).

I sang the praises of Floyd Jones a few weeks back and these versions of "Dark Road" and "Playhouse" were the first versions of these songs that I'd ever heard.  Spires and Blue Smitty (born Claude Smith) both have solid contributions as well.....Smitty's "Crying" has some amazing wild guitar fills for 1952, the year it was recorded.  It's just amazing how much good blues was being played back during this time and how much of it probably didn't get heard by a lot of people at the time and certainly deserved to be heard.

I started trying to find Drop Down Mama a few years ago in CD format, but it was very hard to find at that time.  I tracked down the Nighthawk sides on a European collection of nearly all of Nighthawk's recordings for Aristocrat/Chess (only one alternate take missing), plus two mid-60's recordings with Buddy Guy and Walter Horton in support (Sweet Black Angel, highly recommended if you can find it), so that suited me for a time, but then I happened to find it at the Little Big Store a few weeks ago and decided to pick up the whole set again.