Greetings, fellow blues lovers.  Hope you're keeping safe right now.  Thanks for stopping by.  As you're probably aware, the blog has been mostly suspended for some time now, due to some serious family-related issues.  Well, things are still happening, but the whole world has slowed down considerably due to circumstances beyond our control.  Presently, I am working from home, and count myself fortunate that I am able to do so......lots of folks don't have that luxury, so when I'm not working, I have been trying to get caught up on several things, including writing album reviews for Blues Bytes......I am currently about six months behind based on the stack of CDs in my room.  That was one of the reasons, but not the only reason, that I suspended the blog.

The other day, when I was driving with my youngest daughter, we were listening to some new blues and she asked me if I was still blogging.  I told her that I was not, and she asked me why.  To my surprise, I really couldn't tell her why.  Several of the issues that were previously factors are no longer factors at this moment, and I figured why not start it back up, maybe just at a more relaxed, less involved pace.....fewer longer posts, slipping in a few little capsule reviews of blues albums new and old, and the occasional random thought......sort of like I had intended to do in the beginning.

So, the plan right now is to plug a couple of new releases each week.....maybe reminding you of some that might have slipped through the cracks previously while we're at it......just something to maybe provide you with a few minutes' pleasant diversion from the current madness that we're going through right now.  Hopefully, it will help pass the time for you blues fans, and maybe you can get hooked up with some sounds you might have missed otherwise.  Here goes...... 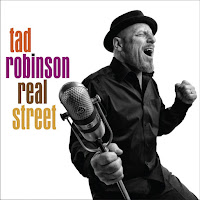 Tad Robinson - Real Street (Severn Records):  I've been a fan of Robinson's since his debut for Delmark quite a few years ago (1994).  He mixes soul and the blues seamlessly with his incredibly soulful tenor and his underrated skills on harmonica.  He found a home with the Severn label, and this is his fifth release for the label.  Severn has a great "house" band that appears on many of their recordings, but for this release, Robinson traveled to Memphis with Severn keyboardist Kevin Anker and enlisted a few living legends (the Hi Rhythm Section (drummer Howard Grimes, bassist Leroy Hodges, and organist extraordinaire Rev. Charles Hodges) and a few modern legends in the making (Bo-Keys guitarist Joe Restivo, sax man Kirk Smothers, trumpeter Marc Franklin, and backing vocalist Devin Thompson).  If you are a fan of vintage Memphis soul, you know exactly what to expect from the music on this set, and Mr. Robinson is more than up to the challenge.  This is my favorite release of his, mainly because of the Memphis vibe, but also for his impressive vocals.  If you dug Boz Scaggs' Memphis release from several years ago, this one will blow you away.  There's not a bad song in the set, but my favorites are the opening shuffle, "Changes," the title track, and two really amazing covers, George Jackson's "Search Your Heart" and a dynamite reworking of Roy Orbison's final hit, "You Got It" that completely transforms the tune. 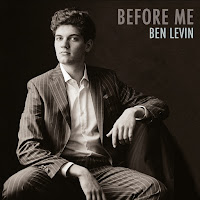 Another treat that I was able to enjoy around the first of the year was a fantastic set of piano blues from a young college student from Cincinnati named Ben Levin, who displays some jaw-dropping skills on Before Me (VizzTone).  There just aren't enough piano blues albums these days and even if there were, this stellar set would stand out as one of the best.  He's joined by guitarist Bob Margolin and harmonica master Bob Corritore on several songs, as well as his dad, guitarist Aron Levin.  The whole disc is just a marvel, with a dozen tracks steeped deep in the blues, half covers and half originals.  A couple of the songs have a New Orleans feel, while others have a cool after-hours vibe, and Levin's taste in covers is diverse, with tunes from Big Bill Broonzy, Freddie King, James Cotton, Big Jay McShann, and the Griffin Brothers.  There are also a couple of great instrumentals teaming Levin with Margolin and Corritore that you wish would go on forever.  In addition to his piano playing, Levin is also an engaging vocalist.  I am really excited for this young man's future and once you give Before Me a listen, you will be, too. 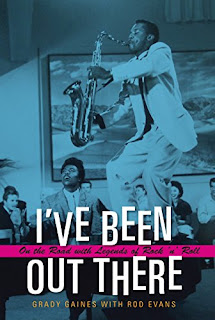 I've also had the opportunity to catch up on my reading the past few months.  A couple of years ago, my oldest daughter (what can I say.......my kids are hip!!) found me a copy of Grady Gaines' autobiography, I've Been Out There:  On the Road with Legends of Rock 'n' Roll (Texas A&M University Press), and I finally got the chance to read it.  When I started listening to the blues, one of my favorite record labels was New Orleans' Black Top Records ("Paving The Way To Your Soul").  Their recordings introduced, or re-introduced, many blues fans to some of the great blues and R&B artists who hit their peak in the 50's and 60's, some of which enjoyed a resurgence in their fortunes, thanks to Black Top's efforts.  Grady Gaines was one of those artists......he cut three dynamite albums for the label that not only showcased his thunderous tenor sax, but also other great artists who had faded into obscurity.  Gaines enjoyed a marvelous career, playing with Little Richard and Sam Cooke, among others, and leading his own band for many years, still going strong today.  This book is only about 190 pages, but it's packed with great stories.  Gaines is not the only one sharing stories either.....there's also input from his guitarist brother Roy, guitarist Milton Hopkins, members of Gaines' bands past and present, and other family members and friends.  Gaines tells a good story (with help from collaborator Rod Evans, who does a fine job) and is not afraid to shoulder the blame for issues when necessary, but this is an upbeat, entertaining story from a relatively unheralded music maker who's been making audiences smile for years.  Check the book out and track down some of Grady Gaines' music when you're done.  You'll be glad you did!!

Hope you're keeping well, G. I'm sure I must have some Blues albums (or at least some tracks) somewhere, so I must dig 'em out and give them a listen at some point. Stay safe.

I hope you're able to find a few in your stash somewhere, Kid. They might just change your life. :) Take care and be safe.