While going through a box of CDs in search of a great jazz CD I'd been trying to track down for awhile (Pete Johnson's Pete's Blues, more later), I stumbled onto a pair of CDs that I had reviewed a few years ago for Blues Bytes.  One good thing about having a little spare time these days is that I have an opportunity to track down some mighty fine music that slipped from the main shelf to one of my storage boxes over the past couple of years......doesn't mean the quality of the music is bad, just means I don't have a lot of storage space.

In 2015 and 2016, Forty Below Records released two volumes of John Mayall's Bluesbreakers - Live in 1967.  Mayall is the elder statesmen of British blues, having turned 86 in November, and some of the finest British (and American) blues-rock musicians served in the Bluesbreakers, including Eric Clapton, Peter Green, Mick Taylor, John McVie, Mick Fleetwood, Jack Bruce, Harvey Mandel, Coco Montoya, Larry Taylor, and Rocky Athas, among others.

Mayall is a fine musician himself, playing guitar, keyboards, and harmonica, but that sometimes gets lost in the shuffle when looking at the all-star personnel who worked their way through the Bluesbreakers over the years.  It's no fault of his own and even at 86, he still manages to release an album of new material every couple of  years, and he remains a formidable force on the British blues scene.

During the 60's, there was a lot of personnel turnover in his band.....there were some 15 editions of the band between 1963 and 1970, as artists moved on to other bands in the then-burgeoning British music scene.


One of those groups, Mayall, guitarist Peter Green, bassist John McVie, and drummer Mick Fleetwood, were only together for about three months in early 1967, not long enough to do any studio work.  Even though Green and McVie were longtime members of the group, Fleetwood wasn't there very long even though he did appear on a few tracks of the band's A Hard Road album, released later in the year.


A Dutch fan named Tom Huissen was able to sneak a one-channel reel-to-reel tape recorder into five different Bluesbreaker club performances around London between February and May of '67.  These recordings were basically unheard for nearly 50 years until Mayall was able to acquire them and began restoring them with Forty Below Records' Eric Corne, finally releasing Volume 1 in April, 2015 and Volume 2 in July, 2016.

Volume 1 provides proof positive that Mayall has long been influenced by a pair of blues legends – Otis Rush and Freddy King, and both of these artists are well-represented in this set…..Rush with four songs (“I Can’t Quit You Baby,” “Double Trouble,” “All Your Love,” and “So Many Roads”) and King with four (“Have You Ever Loved A Woman,” “San-Ho-Zay,” “The Stumble,” and “Someday After Awhile”).

Other cover tunes include “Hi Heel Sneakers” and a powerful version of “Stormy Monday” that closes the disc, with some great interplay between Mayall and Green. There are also two Mayall originals represented, the rousing “Brand New Start” and “Streamline.”

There's some excellent work from the band on these tracks.  McVie were as rock solid a rhythm section as they are today.  Meanwhile, a lot has been written about Green’s guitar work over the years and when I first started listening to the blues, a lot of folks considered him to be the finest white blues guitarist ever. He does nothing to disprove that statement on these tracks, offering up some exquisite fills and solos throughout. 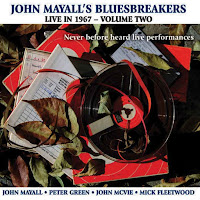 On Volume 2, Mayall and the band work through a familiar set of ’50s urban blues, including a pair of Sonny Boy Williamson tunes (“Your Funeral and My Trial,” “Bye Bye Bird”) that feature Mayall on harmonica, a pair of Otis Rush tunes (“So Many Roads,” “Double Trouble,” in different versions from the ones featured on Volume 1), Eddie Taylor (“Bad Boy”), T-Bone Walker (also a different version of “Stormy Monday” than on Volume 1, this one showcasing vocalist Ronnie Jones, a member of the first edition of Alexis Korner’s Blues Incorporated). There’s also a rocking take on the Lionel Hampton classic, “Ridin’ On The L & N.”

The Mayall originals on this set will be familiar to his longtime fans. The exquisite slow blues “Tears In My Eyes” eventually appeared on the 1967 album Crusade, which featured young guitarist Mick Taylor. “Please Don’t Tell” appeared on another 1967 Mayall album, The Blues Alone, and the churning “train” instrumental “Chicago Line,” has been revisited by Mayall many times over the years. Green gets a six and half minute instrumental, “Greeny,” to show what all the fuss was about back in the day and why he’s still considered one of the greatest guitarist ever.

Sound is not hi-fidelity for sure, given the recording methods at the time, but the tapes have been re-mastered to the point where it’s not an issue at all, much better than most “bootleg” recordings of that time. It’s definitely not something that should discourage potential listeners.

Green, McVie, and Fleetwood would leave the Bluesbreakers and form Fleetwood Mac, who were actually one of the most respected British blues bands prior to becoming a pop-rock powerhouse in the 70's and 80's.  Fleetwood and McVie continue to play with the band, but Green fell off the music scene in the early 70's due to mental issues and drug use, he resurfaced in the late 70's (making an uncredited appearance on Fleetwood Mac's Tusk album) and has performed and recorded off and on since with others and leading his own band (Peter Green Splinter Group).

John Mayall was inducted into the Blues Hall of Fame several years ago, and deservedly so.  He continues to release excellent recordings on a regular basis and also continues to tour worldwide.  These two excellent volumes give blues fans an opportunity to hear one of his finest groups of Bluesbreakers for the first time.