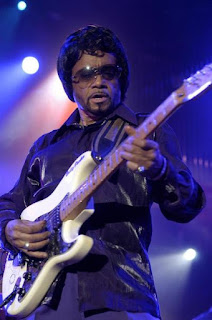 We are rapidly approaching the end of first Blues Fix Mix CD.  It's been a lot of fun going over these tunes with readers.  I've learned a lot about some of these tunes that I wasn't aware of when I first listened to them.  Your humble correspondent has completed four volumes to date, each one an improvement on its predecessor as far as I'm concerned.  At a later date, we'll probably look at those, but for right now, let's keep rolling with Volume One.

Our next blues fix mix track comes from Bobby Parker (1937-2013).  Few people today may recognize the name (and probably few did during his seven-decade career), but he was one of the most influential blues/R&B artists of the 50's and early 60's.  He recorded for a number of labels in the 50's and 60's and enjoyed several hits on the R&B charts during that time.

The B-side to his first single ("Blues Get Off My Shoulder") was "You Got What It Takes," which was recorded by Motown's Marv Johnson.  One problem with the Motown release was that composer credits were claimed by Motown founder Berry Gordy and two others, so Parker was not able to reap the royalty benefits from the sales of the song.

In 1961, Parker released his biggest hit, "Watch Your Step," on the V-Tone label.  The song made the Billboard Hot 100, but not the R&B charts.  However, numerous acts covered the song over the years, including the Spencer Davis Group.  The Beatles performed it in concert and the guitar riff was a big influence on the Fab Four's hits "I Feel Fine" and "Day Tripper."  Later, Led Zeppelin used the riff for their instrumental "Moby Dick."

Parker was not as well known on the blues circuit as some, but he was a major influence on other artists as well......Eric Clapton, Robin Trower, and Carlos Santana.  It was on Santana's early 80's solo album that first heard "Watch Your Step."   It's really a shame that he wasn't better known.  He was a dynamic performer (and how could he not be, playing with some of those entertaining artists listed above), but he was also a first rate guitarist, singer, and songwriter.......the "Total Package" that many musicians can only dream about . 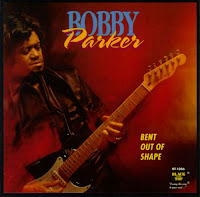 Parker settled in the Washington D.C. area and become the go-to artist in that area for many years.  He took another area guitarist there, Bobby Radcliff, as a protege', and Radcliff described Parker as "Guitar Slim meets James Brown".....which is about as well as you can put it.  In the 90's, Parker released two superlative CDs on the Black Top label, Bent Out of Shape and Shine Me Up.  Though both are out of print now, copies can be pretty easily had and are well worth tracking down.

Track Fourteen of our mix CD is from Parker's Bent Out of Shape album, the dazzling opening track, "Fast Train."  Climb aboard and hang on!!!

Thoroughly enjoyed that song! Thanks. Now I need to be on a fast train out of this comfortable Lazy Boy!