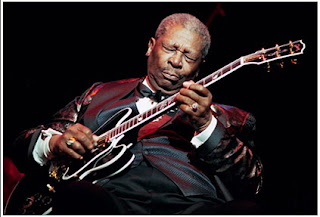 To be sure, there are no definite guidelines to compiling a Blues Fix Mix CD, but if there were any, Guideline #1 would be that at least one B.B. King song be included.  I mean, how could you not include one?  The main question would be, of course, which one and there are so many to choose from over King's eight decades as an entertainer.....the so-called Vintage Years of his tenure with RPM and Crown Records from 1949 - 1962, or his long association with ABC-Paramount, later MCA, later Geffin Records from 1962 until his death in 2015.  What a body of work. 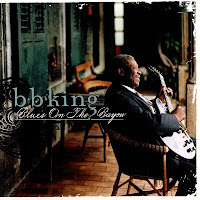 I decided to use one of my favorite of his later tunes, from his 1998 album, Blues on the Bayou.  This was the first album that King produced himself and he took his sweet time putting it together.....just he and his band playing a collection of old B.B. King songs and a few new B.B. King songs.  It was all done live in the studio, no overdubs, no bells and whistles.....just the blues played by the King of the Blues and his band.

"Blues Man," to me, is King sitting back and reflecting over his long career.  At the time he recorded this album, King was 73 years old and this song was no doubt a great representation of his thoughts at the time, and probably represented the feelings of many a blues man before and after him.....the long hours of travel and the long nights of work, followed by more long days of travel to the next town, the lonely days on the road, not seeing family for a long time, even not being able to keep family together, not having any money, or not enough to be able to do anything, even get to the next town.......but still hanging in for that big break, because "Good things come to those who wait."

Since King's death in 2015, listening to "Blues Man," makes me sort of sad, but at the same time, it's a perfect retrospective of his career in just over five minutes.  He waited a long time, too, but he did taste a huge amount of success over most of his career and was certainly was one of the most beloved figures in the blues, and will continue to be for a long time.  That  make me feel better.  Right now, sit back and relax and listen to Track Five of our Blues Fix Mix CD, B.B. King's "Blues Man."

So maybe not your first choice for the B.B. King song to include on a blues mix CD, but it's a good one.....understand?