Hidden Gems - The Way It Is 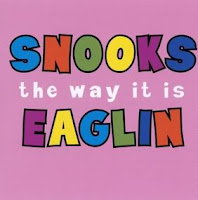 Longtime FBF visitors will remember several of my posts about Black Top Records, the wonderful New Orleans-based label of the 80's and 90's that produced album after album of classic Gulf Coast-based blues and R&B, usually from artists who had achieved a measure of success twenty or thirty years earlier and showed that they hadn't lost a thing over the ensuing years with their Black Top recordings.  I was fortunate enough to stumble across some of these classic recordings in my early years as a blues fan.....in fact, I posted about some of my favorites a few years ago as part of a two week series on the label.

The label folded near the turn of the century, and Emusic took over the Black Top label and catalog from the label's founders, Hammond and Nauman Scott.  However, there was one album in the can that wasn't included in the deal with Emusic, a recording with New Orleans guitarist Snooks Eaglin that was done in the summer of 2000.  A couple of years later, in January of 2002, Nauman Scott passed away, and his brother decided to manufacture about 1,000 copies of the album to sell at the upcoming New Orleans Jazz & Heritage Festival on a label called Money Pit Records.  The album was called The Way It Is, and you can call it the unofficial grand finale of Black Top Records. 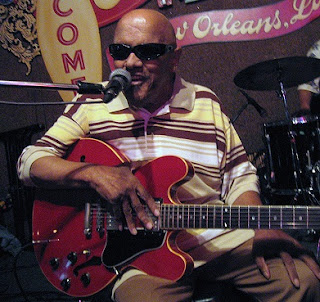 Born in 1936, Fird "Snooks" Eaglin lost his sight at 19 months after an emergency operation to remove a brain tumor.  Apparently, it didn't slow him down too much.  His father brought home a guitar when Eaglin was five and he taught himself to play well enough that he won a talent contest at the age of 11.  He soon purchased an electric guitar and he was off to the races, soon earning gigs with Sugar Boy Crawford (that's Eaglin playing guitar on Crawford's "Jock-a-Mo"), and later a group called the Hawketts, which featured a piano player named Allen Toussaint.

In the late 50's, Eaglin was recorded by a couple of folklorists, Dr. Harry Oster and Richard Allen.  These songs were released on several labels and featured him playing blues, pop, rock, and folk music.  Although titled New Orleans Street Singer, Eaglin never played on the streets......the album title actually irritated him.  In the 60's, Eaglin recorded for Imperial Records and Fun records with limited success.

In the 70's, Eaglin met Quint Davis, who founded the New Orleans Jazz & Heritage Festival in the early 70's.  Davis is the guy who came up with the brilliant idea of pairing Snooks Eaglin and Professor Longhair, a partnership that resulted in some great Jazz Fest appearances and some wonderful recordings in the 70's.  He also recorded an LP for Sam Charters' Legacy of the Blues series, plus a couple of albums with the Mardi Gras Indian group The Wild Magnolias in the early 70's, but soon dropped out of the studio scene after that.

In the mid 80's, Eaglin met Hammond Scott and the guitarist became part of the Black Top family, releasing four excellent studio albums and one live effort.  All of these albums exposed him to a wider audience, resulting in more gigs at American and European blues festivals for many years.

Eaglin was regarded for his huge repertoire.....estimated at about 2,500 songs, he could pretty much play any song after a couple of listens and was called "The Human Jukebox" around New Orleans....., his unique guitar playing....he often sounded like two guitars, playing bass with rhythm and lead......, and his equally unique vocals, which were sometimes compared to Ray Charles (though I never really saw this.....to me, his voice was uniquely his own).  He played a wide range of music on his albums and in concerts, ranging from the acoustic and electric blues to rock 'n' roll, jazz, country, and even Latin music.


I got to see Eaglin at Jazz Fest in the early 90's.....1994, I think.  He was just amazing.  I was spellbound by his dexterity.  It's one thing to hear it on a recording, but very much another thing to actually see him play in person.  I was even more amazed after I found out later that he rarely used a set list and his band sometimes didn't know what was coming.  He would just play songs that came to him and often took requests from the crowd. 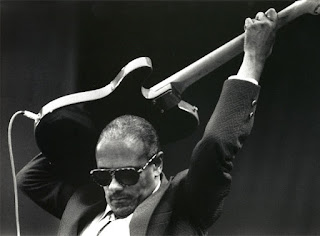 I'm not sure how I found out about The Way It Is.  Back in the early 2000's, I was pretty big into eBay.....I picked up a lot of used CDs, many out of print or hard to find at the time.  I found the CD on eBay and even though I didn't know anything about it, I knew I was a big fan of Snooks Eaglin, so I snatched it up, unseen and unheard.

At the time, one of the eBay sellers that I traded with was Jeff Hannusch, who authored a couple of definitive books on New Orleans Blues & R&B (I Hear You Knockin':  The Sound of New Orleans Rhythm & Blues and The Soul of New Orleans:  A Legacy of Rhythm & Blues)and has written countless magazine and newspaper articles and album liner notes about New Orleans musicians.  He gave me some info on the disc, some of which I've used on this post, so I had an idea of what I was getting before it arrived in the mail.

For The Way It Is, Eaglin is joined by Jon Cleary & the Absolute Monster Gentlemen on most of the thirteen tracks.  One of the funkiest bands in the Crescent City, Cleary and company provided rock solid backing, giving Eaglin plenty of room to do his thing......and "do his thing" he most definitely does.

As on all of Snooks Eaglin's albums, there's a diverse set of tunes, some familiar songs, though he really makes them his own with his sparkling guitar work and unique vocal style, and a few interesting originals.  The opening track is called "Can You Hear Me," an original which would have been a tight fit on a Meters album.  Cleary and the Gentlemen lay down a gritty and greasy funk bottom for Eaglin to strategically place his stinging leads and fills.  It was hard for me to get past this one.....I love The Meters' music and this song really nails that sound, plus you get the added bonus of Snooks Eaglin and his guitar.

There were a couple more songs in the funk vein on The Way It Is, notably a sizzling cover of the Charles Wright classic, "Express Yourself."  Since Eaglin was a New Orleans guitarist, the funk is present on several other songs that touch on the Crescent City R&B style, too.  Earl King's "A Mother's Love," and "Lock Doctor," from James Harman, and Guitar Slim's "I Done Got Over It."

The track from Guitar Slim leans more toward blues than R&B, and Eaglin ably revitalizes some classic blues tunes as well, among them Gatemouth Brown's "Boogie Rambler" (my favorite), "Joe Simon's "The Chokin' Kind," and the Johnny Otis standard "Looking Back."  The funk is strong with these tracks as well, courtesy of bass player Erving Charles, Jr. and drummer Raymond Weber, with some nice sax added on "Boogie Rambler" from Tony Dagradi.


Other stylistic ventures include jazz ("Trees," "Ghost of a Chance") and Latin ("Cubano Mambo" and the ribald "I Don't Speak Espanol").  On the latter song, Eaglin takes on a hilarious, high-pitched feminine voice for most of the track.

The closer is an autobiographical, free form funk workout, I've Been Around The World," where Eaglin lists many of the famous places he's played and most of the famous people he's played with.  I say "most" because for some odd reason, he neglects to mention a couple of them.....namely Professor Longhair and bass player George Porter, Jr., who accompanied him on most of his Black Top dates in the 80's and 90's.  Still, it's a fun and loose track and a smart way to close the disc.

Sadly, The Way It Is proved to be not only Black Top's last hurrah (albeit "indirectly"), but also Eaglin's.  He didn't record or release another album between this one and his death in 2009 from a heart attack at age 73.  He had been battling prostate cancer the previous year and was planning to make a comeback appearance at the 2009 Jazz Fest.  Eaglin rarely played live shows, he was a Seventh Day Adventist, so Saturdays were out, but he regularly played Jazz Fest.

I strongly recommend any of Eaglin's albums, even the early acoustic album has some nice moments, but The Way It Is is my favorite......the New Orleans vibe, especially the funk aspect, really comes through on every note played. It's somewhat hard to find, the original pressing especially since there were only 1,000 or so done, but if you do find it, you will be entertained.  Snooks Eaglin was a master guitarist and entertainer and that comes through loud and clear on this recording.