The May issue of Blues Bytes will soon be upon us, but yours truly continues to plug away at the stack of new music piled high on his desk.  Here are a few more new discs from a few artists that you've seen at Friday Blues Fix over the years that you definitely need to track down. 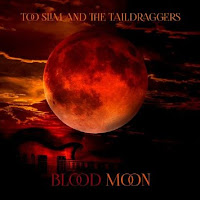 Friday Blues Fix sat down with Tim "Too Slim" Langford a couple of years for Ten Questions.  A lot has happened since then.  Langford was diagnosed with cancer in late 2014 and underwent surgery and treatment.  Since then, he's done very well and after a brief hiatus, he jumped back into action via touring and recording his latest album, Blood Moon (Underground Records) with his band, the Taildraggers.  If you're not familiar with Too Slim and you love blues rock played well, you need to give this disc a listen.  To these ears, this is his best recording with some of his most inspired playing, singing and songwriting.  The songs are a mix of blues, rock (southern, rock 'n' roll, and British Invasion-inspired), country, and even a little bit of jazz and I'm amazed his guitar didn't burst into flames on a couple of these tunes.  Two or three of the songs recount his recent health issues, his struggles and refusal to back down, and his recognition of friends and supports who helped him battle back.  This is a most excellent release and one that blues rock fans in particular should have in their collection. 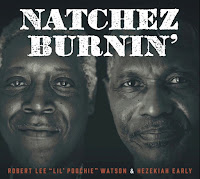 Jeff Konkel and Roger Stolle's internet blues series Moonshine & Mojo Hands has been the talk of the blues world over the past month, but recently Konkel's Broke & Hungry Records released Natchez Burnin', the first collaboration on album from two of Natchez, MS's finest blues representatives, singer/guitarist Robert Lee "Lil' Poochie" Watson and multi-instrumentalist/singer Hezekiah Early.  The duo appeared on Konkel and Stolle's 2012 documentary, We Juke Up In Here, which led to this recording, which featured the pair tearing through a set of original tunes and covers from a set of artists ranging from Big Joe Turner to Fats Domino to Louis Jordan to Lightnin' Hopkins and Chuck Willis.  Yep, that's a pretty wide range of music, but it's all brought together in a rough and ready down-home electric (and sometimes acoustic) brand of blues.  This is a set that all fans of rugged traditional Mississippi blues should add to their collection.  Thank goodness that there are still artists out there that play that way.  May they never stop doing it. 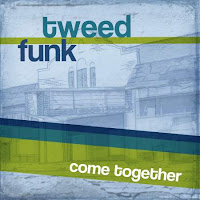 Tweed Funk guitarist J.D. Optekar sat down for Ten Questions a couple of years ago, soon after the release of their 2014 album, First Name Lucky.  Recently, the band issued their fourth CD, Come Together, on Tweed Tone Records.  Growing up, I really dug bands that mixed soul and funk in the 70's.  I loved those greasy grooves and tight horn sections.  Combine that with a definite knack for playing the blues and throw in a shot of jazz, and you've got Tweed Funk.  This disc is their best recording yet.  The band is firing on all cylinders and singer Joseph "Smokey" Holman is in the vocal zone himself.  The songs are great and delivered with a boundless exuberance that's contagious.  This is a disc that will cross over from the blues aisle into several other genres.....fans of old school soul and funk simply must have this disc, just as much as the folks on the blues side.  You can thank me later. 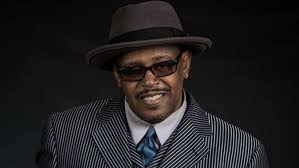 While we're on the subject of Tweed Funk, let's give a shout-out to Smokey Holman, who was diagnosed with Multiple Myeloma in late April.  He was recently hospitalized but is doing his best to bounce back in time to work with the band to help promote the new album, but he and the band are fully focused on his health and recovery.  He will be undergoing surgery later this summer, so please keep Smokey in your thoughts and prayers over the coming months. 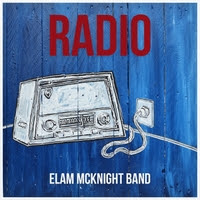 The last album I want to talk about this week is not even available yet.....it's coming in August, but I wanted to give you a heads-up about FBF buddy Elam McKnight's upcoming release, Radio.  If you're not familiar with McKnight, who I hope will be a future Ten Questions subject, he's a versatile blues man who is equally comfortable in a number of other genres (we reviewed his last CD, Made to Fall, here).  The blues is strong with this release, but there are also hints of soul and roots, rock and pop, country, and Gospel.  He's savvy enough to mix all of these genres together in a totally original way.  I really dig the direction that he's going with his music.....he's taking the blues in new, exciting, and sometimes unexpected directions, and it sounds so good that you'll wonder why it hasn't been done before.  I've enjoyed all of McKnight's releases since his debut, Braid My Hair, but I have to say that this one is his best.  Even though the album won't go live until August, you can check out the title track from Radio right here, and pick it up at Amazon, iTunes, Google Play, or CDBaby.


Be sure to come back in a couple of weeks for more New Blues For You.....there's still a lot of spring left and lots of great new releases to discuss.  Now, let's discuss what else has been happening in FBF's world lately. 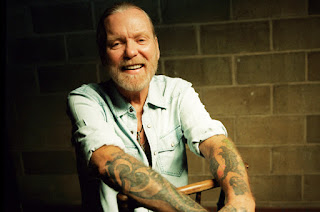 A couple of weeks ago, I was working on that week's FBF post and my wife was watching TV when she ran across a Dan Rather interview on AXS with Gregg Allman.  She let me know and we both tuned in.  It's a really good interview if you haven't had a chance to see it......a preview is available on YouTube.  Allman was actually playing close by in a few days, so we decided to buy tickets for the family and go check him out.  It has been a number of years since we'd seen him (with the Allman Brothers in Tuscaloosa in 1993), so I went online and bought tickets and the next week, we headed west to Jackson, MS's Thalia Mara Hall to see the show.

Most folks around here who listen to the blues started out listening to the Allmans, Clapton, and SRV and gravitated to the blues from there, so there was a pretty big crowd in attendance.  Anders Osborne was supposed to open for Allman, but was unable to, due to a back injury.  In his place was a blues-rock trio from Baton Rouge called the Blues Revolution, led by a great guitarist and showman named Jonathon Boogie Long.  These guys rocked the house for 45 guitar-shredding minutes and I'm pretty sure that even though a lot of the audience didn't know him when he first walked onstage, they definitely wanted to hear more after he departed.

Soon afterward, Gregg Allman made his appearance, backed by guitar, bass, drums, percussion, and a three-piece horn section.  The sound, as might be expected, was a bit different from the Allman Brothers....he actually revamped a couple of Allman Brothers tunes, adding horns.  For the most part, the horns fit in fine and the rest of the band was really good.

Allman mixed his solo material with several choice Allman Brothers favorites.  He sounds as great as ever, with his vocals having a bit of a rougher edge due to wear and tear and age.  A lot of his solo tunes, the newer ones, have a more soul/R&B feel, and he also played several old favorites in that style.  "One Way Out" worked pretty well, "Whipping Post" was less effective (I love the original version, so it would be hard to top), but still pretty powerful.
One of the coolest thing about these shows with artists like Allman is the amount of crowd participation.  Several of the songs featured loud audience participation.  EVERYBODY sang along with "Midnight Rider" and "One Way Out," with Allman's encouragement.  They also attempted, with less success, to sing along with "Melissa," but nobody cared if it was good or bad, they were just there to enjoy one of the favorites that they grew up with.  As I said above, a lot of folks in the south cut their musical teeth on the Allman Brothers and other southern rock bands.  All of these bands were more than happy to pay tribute to their musical influences, the blues being part of that influence.

If you get the opportunity, I recommend that you go see Gregg Allman.  He's still got tons left on his fastball and a great band in support.  I also recommend Jonathon "Boogie" Long and the Blues Revolution.  Long is a master showman and a blues-rock star in the making that deserves to be heard.