It's time once again for Friday Blues Fix's look at five discs that might have slipped through the cracks upon first release.  If you're like me, you might have missed them because you weren't listening to the blues at the time, they might have been overshadowed by other new releases, or maybe they went out of print before you could find them, or maybe you just flat missed out the first time around due to total cluelessness, which is how it usually works for me.  Don't look now, but this is your golden opportunity to make up for lost time and track down these great albums.  Some of them may be out of print, but they can be found pretty easily online at eBay or Amazon. 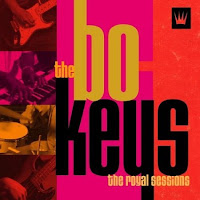 The Bo-Keys - The Royal Sessions (Yellow Dog Records):  This disc blew me away when it was released in 2004, and it still packs a punch today.  If you are a fan of classic Memphis soul, especially the instrumental bands.....Booker T & the MG's, the Bar-Kays, the Mar-Keys, etc....this disc has your name all over it.  The band is loaded with veterans of the Memphis blues scene......drummer Willie Hall, B-3 master Ronnie Willams, trumpeter Marc Franklin, sax man Jim Spake, and guitarist Skip Pitts (the man who brought you the "waka waka" guitar on "Theme from Shaft").....who collaborated with young bass player Scott Bomar to present this awesome set of instrumentals.  The grease and BBQ are practically dripping off this gritty collection of mostly original compositions, alongside tunes originally performed by Booker T, James Brown, and Jimmy Smith.  The Bo-Keys also released 2012's Got To Get Back, which received a lot of attention at the time, but this one is still my favorite and still blows me away today (If there was such a thing in everyday life, their reading of "Coming Home Baby" would serve as my theme song). 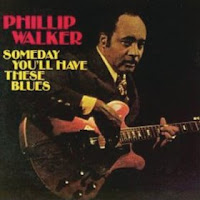 Phillip Walker - Someday You'll Have These Blues (Shout! Factory):  Hard to believe that it's been five years (July 22nd) since Walker passed away.  He was such a reliable artist for such a long time, though he was not recorded nearly as much as he should have been.  Walker was born in Louisiana, but learned his craft in southern Texas from guitarists like Lonnie Brooks, Gatemouth Brown, and Long John Hunter.  He backed zydeco legend Clifton Chenier for 3 1/2 years in the mid 50's, then moved to Los Angeles and began working as a guitarist there, cutting singles.  His guitar work eventually became a combination of the West Coast and Gulf Coast sound.  He cut this album in the mid 70's for Joliet Records.  It was later picked up by Alligator and eventually by HighTone Records, the label owned by Bruce Bromberg, who produced the album with Dennis Walker.  Walker was never earth-shattering as a performer, but he had a quiet consistency.....his albums were ALWAYS good with a lot of variation in material (from urban blues to countrified blues to soul) and featured some tasteful, understated guitar.  This album is no exception, but sometimes it seems to get lost in the shuffle among his other recordings.  Walker actually became a bit more prolific as a recording artist in the late 80's through the mid 2000's (even recording a set with two of his heroes, Hunter and Brooks) and all of his recordings are worth hearing, but this one is one of my favorites. 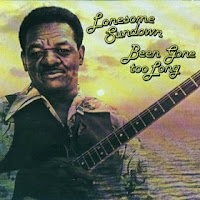 Lonesome Sundown - Been Gone Too Long (Shout! Factory):  Lonesome Sundown (a.k.a. Cornelius Green) was one of the unsung heroes of Excello Records.  Also starting out as guitarist for Chenier, Sundown ended up recording a number of classic sides for the label, beginning in the mid 50's.  He retired from the music business in the mid 60's, focusing on the church.  He was persuaded in 1977 to come out of retirement to record this album for Joliet Records, which was produced by Bruce Bromberg and Dennis Walker.  Alligator Records later released it on their label, and finally it ended up on Bromberg's HighTone label.  There are eleven tracks on the album, which features several swamp blues tunes and a couple of soul tracks, which showed that he could expand his sound beyond the standard blues fare.  Phillip Walker, whose above release followed the same distribution path as this one, chips in on guitar and they worked really well together......so well that Rounder Records eventually released a collaborative effort from them (which is hard to find, but worth a listen).  This was intended to be Lonesome Sundown's "comeback" album, but it failed to sell, either with Joliet or Alligator, which is a shame.  It's a really good set from an artist who never  really got the recognition he deserved, and if you're into swamp blues at all, you should give it a listen. 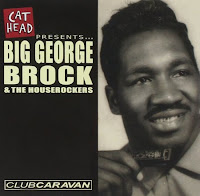 Big George Brock & the Houserockers - Club Caravan (Cat Head Delta Blues & Folk Art):  Brock has been playing the blues for over 60 years, and is still going strong.  When Roger Stolle opened up his Cat Head store, he booked Brock for his Grand Opening......he had heard Brock regularly when they both lived in St. Louis.  Stolle decided to record Brock after the blues man mentioned that he'd like to cut an album.  The session was done at Jimbo Mathus' Delta Recording Studio with Riley Coatie's famly band (called the Houserockers).  Coatie taught his children to play in the old school style, which is right up Brock's alley, as the singer/harmonica player works through a set of songs from Muddy Waters, Sonny Boy Williamson, Howlin' Wolf, and Jimmy Reed, plus six originals, which includes "M for Mississippi," "Down South," a nod to Cat Head, plus a pair of instrumentals.  Since this release, Brock has recorded a couple more albums for Cat Head and APO, and he's appeared on a couple of DVDs, including Hard Times, a Cat Head documentary about his life and career.  If you have a hankering for some old school blues, look no further. 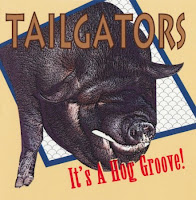 Tailgators - It's A Hog Groove (Upstart Records):  This album was part of the reason that I finally switched from cassettes to CDs in the late 90's.  In the late 80's, I discovered the Tailgators and their hot blend of rock & roll, Louisiana swamp pop and blues, and Cajun/zydeco.  In fact, their recordings on Wrestler Records convinced me to check out more of their influences.  Their releases were sporadic, but always worth the wait.  When this album came out, it was only available on CD, and it had been a couple of years since I'd heard anything new from them.  I finally accepted the inevitable, and made the transition.  When I did, this was in the first batch of CDs that I purchased, and it's still one of my favorites.  This one has it all, rock & roll, blues, Cajun/zydeco, and surf guitar, sometimes all in the same song (see below).  If you're having a party of any kind, this CD needs to be in your collection.  Whenever I play it, which is pretty frequently, I play it three or four times in a row.  It's that good, folks!