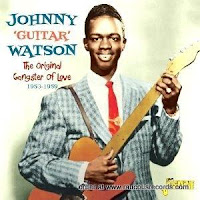 When I was a kid, probably in my early teens, I first encountered the Gangster of Love.  I was hanging out with one of my friends in the parking lot at his dad's place of business.  One of the employees pulled in, late for work, in a old yellow Chevy Nova, windows down, music blaring.  He was listening to some of the wildest, funkiest music I'd ever heard, which intrigued me, even as a youngster.

This guy hopped out of his car, knowing he was late, but stopping to light a cigarette and shoot the breeze with us for a few minutes.  He had his work uniform on, but was sporting a fairly impressive afro billowing out from underneath his headgear.  While he was smoking, I asked him what he was listening to when he pulled up.  He looked down at me and said, really he sneered, "Johnny 'Guitar,' 'Real Mutha F'Ya," then he strolled into the back of the store like he was fifteen minutes early instead of fifteen minutes late. 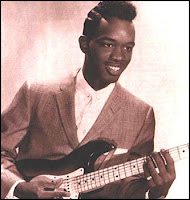 Of course, he was listening to Johnny "Guitar" Watson, and even though I didn't know it at the time, I was listening to the results of the amazing guitarist's third musical reinvention back then in the mid 70's.  Watson had actually seen two impressive musical careers come and go before developing his funky R&B persona that carried him through until his death in 1996.  What I didn't find out until about ten years later was that Johnny "Guitar" Watson started out as one of the hottest blues guitarists of the 1950's, actually getting his start playing the piano as a teenager in Houston, TX in the early 50's.

Watson was, like many, influenced by the great T-Bone Walker.  He started out playing with such future blues legends as Albert Collins and Johnny Copeland in Houston, but migrated to Los Angeles as a 15-year-old, where he hooked up with sax man Chuck Higgins' band, playing piano and singing on the original "Motor Head Baby," cut by Higgins on the Combo label in 1952.  He later cut a livelier version the next year for Federal Records, billed as Young John Watson....this time playing guitar, along with Wayne Bennett, who would later play on many of Bobby "Blue" Bland's Duke recordings.

During this time, Watson would travel to New Orleans and hang out with Guitar Slim, whose wild act included hooking up a long power cord to his guitar to allow him to play in the audience and even into the street, along with wild suits of many colors (with matching hair and shoes).  Watson took it a step further.

"I saw what Slim was up to and figured I could do the same.  Liked his fire and flash.  Truth is, it got to a point where we'd gig together and march into the club with me carrying him on my shoulders, both of us firing away on our guitars like World War III.  But I did Slim one better.  Got me a 200-foot cord, so when I played auditoriums, I'd start in the back of the balcony and work my way down.  I could see rock 'n' roll coming, and could see that when it came in, it'd be riding on the back of some flame-eating guitar.  Well, hell, by then 'Guitar' was my middle name." 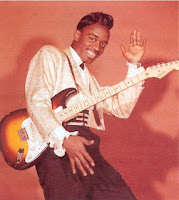 Also in 1954, Watson lived up to his new middle name by creating "Space Guitar," an astonishing instrumental that was at least ten years ahead of its time and one of the most amazing guitar tracks of the 1950's.  Watson's incredibly intense playing was done without the benefit of a pick, and the distortion and feedback foresaw the work of 60's guitarists like Jimi Hendrix by nearly a dozen years.  He took on a flamboyant persona, sort of a humorous swagger, with lots of flashy clothes and showmanship that rivaled the legendary Guitar Slim at times.

"I'd play with my teeth.  I'd play standing on my hands, play it over my head and under my legs.  See the technology was changing.  I was fooling with overdubbing.  I was looking at these Stratocaster guitars and Fender amps and reverbing like crazy.  I was seeing all these new sounds I could create.  Sounds the kids liked, and sounds that still had the funky feeling I'd gotten when I was playing with Amos Milburn or Bumps Blackwell.  I think I was the link between the old and the new.  I wasn't afraid to take it a little further and see where it went."


From Federal, Watson moved to the RPM label in 1955, where he continued to release excellent blues tracks like "Hot Little Mama," "Too Tired," and the incredibly cool "Three Hours Past Midnight," a second cousin to B.B. King's "Three O'Clock Blues."  During this time, Watson's vocal skills were rapidly developing to the point where they were as distinctive as his guitar playing, equally capable of humor, power and passion.  Most of these tracks were done under the supervision of Maxwell Davis, who was also the driving force behind B.B. King's great tunes of the same era.

After bouncing around several labels (Keen, Class, Arvee, Goth, and Escort) during the mid to late 50's, Watson joined forces with Johnny Otis at King Records in the early 60's, where he recorded some marvelous tracks, including the soulful "That's The Chance You've Got To Take," in 1962, along with strong remakes of some earlier hits in 1963, such as his trademark tune, "Gangster of Love" (originally cut for Keen Records in 1957).

In 1964, Watson recorded a jazz album for Chess, where he focused on piano, then he partnered with rock and soul singer Larry Williams for several years, recording several singles and an album.  By the late 60's, the Gangster of Love had dropped off the scene temporarily, as blues faded and soul began to emerge. 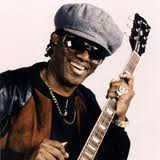 When Watson resurfaced in the mid 70's, transformed into an urban soul singer, resplendent in sharp threads, dark glasses, and pimp hats.  His music took on a decidedly funky tone and he enjoyed success with tunes like "I Don't Want To Be A Lone Ranger," "A Real Mother For Ya," "Superman Lover," and "I Need It."  His 1980 tune, "Telephone Bill," featured Watson rapping, one of the first songs of its like ever recorded.

He also re-recorded his trademark tune, "Gangster of Love," in 1978, and enjoyed a long string of successful albums for DJM Records that lasted until the mid 80's, when he dropped off the music scene once again.  There was some speculation as to why he dropped off the scene at the time.  His friend, Larry Williams, was found dead with a gunshot wound to the head in 1980.  Though his death was ruled a suicide, there were rumors for years that he was murdered because of his involvement with drugs, crime, and prostitution, and there were also rumors that Watson himself was a pimp during that period.


In any event, after a lengthy absence, Watson returned in 1994 with a recording, Bow Wow, that was nominated for a Grammy for Best Traditional Blues Album, despite it's purely old school funk material.  He also returned to performing, showing that he's lost little to none of his flamboyance and showmanship (as seen in the above video from 1996).  It was during part of this comeback tour, while in Japan, that Johnny "Guitar" Watson died from a heart attack while performing at the Yokohama Blues Cafe.  He was only 61 years old. 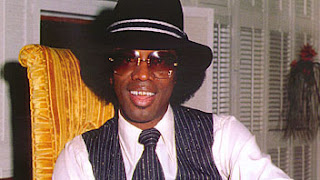 Watson's influence can be heard in the music of many past and present performers, such as Frank Zappa, who was inspired to pick up guitar after hearing "Three Hours Past Midnight," Steve Miller, who had a big hit with his version of "Gangster of Love" (and referred to the title in his hit song, "The Joker"), Stevie Ray and Jimmie Vaughan, and Bobby Womack.  His influence wasn't just on guitarists...artists like Etta James and Womack were influenced by his singing, and funk masters like George Clinton and Sly Stone learned a few tricks from him as well.  There are very few artists who cut a wider, more diverse path in modern music and also few who inspired artists from so many different genres.

Many of Watson's recordings are still available, but there are two choice releases that capture the two most productive periods of his career. 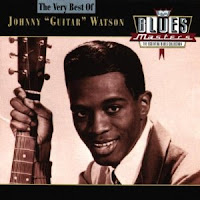 Rhino's The Very Best of Johnny "Guitar" Watson has 18 of Watson's best blues tracks spanning from the early 50's to the early 60's, including "Space Guitar," "Hot Little Mama," "Gangster of Love," "Those Lonely Lonely Nights," two versions of "Motor Head Baby," and "Three Hours Past Midnight."  The only track not here that I really wish had been included was his scorching "Hit The Highway," which has been covered by Robert Cray (on his Bad Influence album), and, most recently, but the Andy T - Nick Nixon Band (on their 2013 release, Drink Drank Drunk).  There have been several compilations of this music, but the Rhino set is the best overall package, and features informative liner notes from music biographer David Ritz. 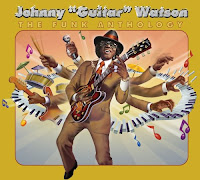 Shout! Factory's The Funk Anthology traces Watson's soul/R&B/funk years from 1970 to his last release in 1994.  While maybe not every blues fan's cup of tea, there is some great, fun music here that really captures the era, with Watson taking his guitar chops (influenced by T-Bone Walker, Gatemouth Brown, and others) and his strong vocal style and mixing it in with jazz, R&B, soul, disco, funk, and whatever else could fit in the pot.  This is a two-disc set that pretty much has all his must-hear material from this productive period in his career.  When you hear it, you will see clearly the number of artists he influenced in modern R&B.  This set also features excellent liner notes from Ritz, who should really consider writing a full-fledged biography about Watson in the future.