Detroit has always had a relatively fertile blues scene, but only one Detroit bluesman, John Lee Hooker, enjoyed lasting fame.  There have been dozens of others, like Eddie "Guitar" Burns, Johnnie Bassett, Alberta Adams, Calvin Frazier, Harmonica Shah, Little Sonny, and Dr. Ross, who were and are very good at what they do.  The larger blues scene in Chicago, which is very similar in style to the Detroit brand of blues, has always gotten the bulk of attention.

One of the unsung bluesmen of the Detroit scene was Robert "Baby Boy" Warren.  For about six years, from the late 40's to the mid 50's, Warren compiled a pretty impressive catalog of recordings for a variety of labels, but didn't receive much attention beyond the Motor City.  In recent years, a lot of blues historians have reconsidered Warren's place in the history of the blues.  He was an above average guitarist and a very good songwriter.

Warren was born in 1919, in Lake Providence, LA.  His family moved to Memphis when he was only three months old.  He was one of 12 children, and he got the nickname "Baby Boy" from his older brothers when he was a kid.  He always loved music and was working as a musician when he was in his early teens, having learned to play guitar from his older brothers.  He was a regular at Handy Park in the 30's, with others like Howlin' Wolf, Robert Lockwood, Jr., and Little Buddy Doyle, one of his songwriting mentors (another was Memphis Minnie).  He also appeared on the King Biscuit Time radio broadcast in the early 40's with Sonny Boy Williamson.(Rice Miller version).  Soon after, he migrated to Detroit to work for General Motors and play guitar on the side at local clubs.

Warren first recorded in 1949, with piano man Charley Mills.  Five singles appeared on several different labels, like Prize, Staff, Gotham, and Federal.  In 1950, he teamed with another piano player, Boogie Woogie Red, to release singles for Staff, Sampson, and Swing Time.  Among the high points of these sessions were songs like "My Special Friend Blues" and "Mattie Mae."

In 1954, Miller came to Detroit to sit in with Warren on a few tracks, including "Baby Boy Blues," "Chicken," "Sanafee" and "Chuc-A-Luck."  The last two tracks eventually made it to Excello.  A couple of other tracks from that session ended up on JVB , and later on in the year, Warren recorded a couple of tracks for Blue Lake Records with Calvin Frazier on guitar and Boogie Woogie Red on piano, and a session for Drummond Records that included a reworking of Robert Johnson's "Stop Breakin' Down."

According to blues scholars, Warren's songwriting and style owed a strong debt to Robert Johnson.  His lyrics were highly original and often were loaded with wit and humor.  Plus, he was backed by some of Detroit's finest musicians in Frazier, Boogie Woogie Red, Washboard Willie, and others on his handful of singles.  Despite all this, he didn't receive a lot of attention at the time and he faded from the music scene for most of the 1960's.

Warren resurfaced in the 1970's to play several festivals in Detroit and Ann Arbor, then with Boogie Woogie Red in Europe in 1972.  He also played for several years with the Progressive Blues Band in many Detroit blues venues, headlining with Willie D. Warren.  In July of 1977, he died from a heart attack and was buried in Detroit.

Blues historians all agree that even though there were blues singers who could sing better and blues guitarists who could play guitar better, there were very few who had a way with a lyric like Baby Boy Warren.  It's a shame that his output was limited to less than two dozen sides, but all of those are worth listening to.  If ever there was an early era blues artist deserving of wider recognition, it would be Baby Boy Warren. 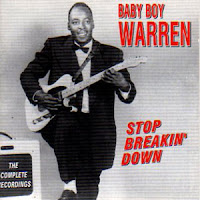 There have been several attempts during the years to collect all of Warren's recordings onto one disc.  Although there aren't any collections in print right now, they can be found.  Official's Stop Breakin' Down has pretty decent sound and an interview with Warren in the liner notes, so try to find it if you can....it's usually available on Ebay.  If not, there's a 4 CD collection of Detroit Blues from JSP Records in the UK that has several Warren tracks with great sound, along with some other excellent artists from the Motor City.  Either way, Baby Boy Warren deserves to be heard.