This is a tale of two brothers.....two brothers who play the blues.  They both had winding paths to get to where they are today, with side trips to the soul side along the way, but they have both left their mark on the blues, together and separately, taking elements of blues, soul, and gospel and mixing it all together. 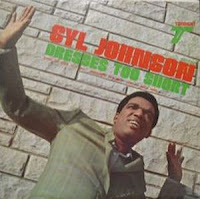 Syl Johnson was born Sylvester Thompson in 1936.  He moved with his family to Chicago in 1950, where his neighbor was none other than Magic Sam (the middle Thompson brother, Mack, played bass for Magic Sam in the 60's).  Growing up, Syl sang, played, and recorded with Magic Sam, Billy Boy Arnold, Junior Wells, Jimmy Reed, and Howlin' Wolf.  In the late 50's, he cut his own recording for Federal Records (where he changed his last name from Thompson to Johnson), with Freddie King backing on guitar.  In the 60's, he recorded for Twilight and Twinight Records, recording such soul classics as "Come On, Sock It To Me," "Different Strokes," and "Dresses Too Short."  He also touched on then-current political issues with songs like "Is It Because I'm Black" and "Concrete Reservation."

Jimmy Thompson is Syl's older brother by eight years.  He, too, made the move to Chicago in 1950, but worked as a welder, playing guitar on the side (he learned while in Mississippi from childhood friend and neighbor, Matt "Guitar" Murphy).  After nearly a decade, he began gigging around Chicago with a harmonica player named Slim Willis.  During that time, he also changed his last name to Johnson.  In the 60's, he focused more on the soul side due to the prospects of making more money, so he ended up leading bands that backed artists like Garland Green, Otis Clay, and Denise LaSalle, while managing to release an occasional instrumental single along the way. 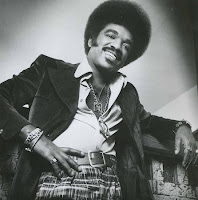 Both artists hit their stride in the 70's.  Syl Johnson signed with Hi Records out of Memphis.  He enjoyed his greatest success with Hi, recording three albums and sides like "Take Me To The River," "We Did It," and "Back For A Taste Of Your Love."  However, Johnson, like many of Hi's other soul artists, had to contend with the enormous success of their labelmate, Al Green.  After Hi folded in the late 70's, Johnson recorded a couple of albums for his own label, Sharma, which included his last hit, "Ms Fine Brown Frame."


Jimmy Johnson ventured back into the blues world in 1974, when he joined Jimmy Dawkins' band as rhythm guitarist.  In 1975, he toured Japan with Otis Rush and found his way onto Rush's live Delmark release, So Many Roads - Live in Concert.  In 1978, he finally stepped forward as a front man, recording four tracks as part of Alligator's Living Chicago Blues series.  That led to a pair of fine releases for Delmark in the late 70's and early 80's (Johnson Whacks and North/South), plus a 1983 French release (Heap See) subsequently released by Alligator a couple of years later as Bar Room Preacher.  Those three releases propelled Jimmy Johnson to the upper ranks of Chicago bluesmen. 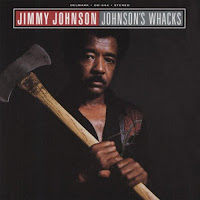 The mid to late 80's was a tough time for both Johnson brothers.  Syl Johnson's music career faded and he took a job as a deputy marshal, then he started a fast-food fish restaurant business, and semi-retired from music.  Jimmy Johnson was still riding a hot streak when his band van swerved off of an Indiana highway, killing bass player Larry Exum and keyboard player St. James Bryant, and seriously injuring Johnson.  After the accident, Johnson decided that he would take an extended break from the music business.


In 1992, Syl Johnson discovered that his song, "Different Strokes," had been sampled by, like, a kajillion rappers, including Wu-Tang Clan, Public Enemy, M.C. Hammer, the Geto Boys, and others.  It encouraged him to do two things.....first, he went to court and eventually, he won all the rights to his Twilight and Twinight recordings, which led to steady paychecks coming in.  Second, he decided to hit the road again, building a new band, touring, and eventually recording for Delmark (Back in the Game and Talkin' About Chicago) and Antones (Bridge to a Legacy) in the late 90's and early 2000's, mixing remakes of his classic songs with some exciting new compositions steeped in soul and blues.  Jimmy Johnson resurfaced in 1994, with a fine release on Verve Records (I'm A Jockey), followed by Every Road Ends Somewhere for Ruf Records in 1999.  Both records were well-received by fans and critics.  Jimmy, like Syl, mixes blues and soul seamlessly. 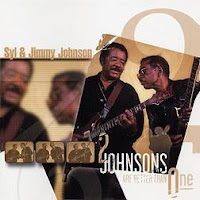 Interestingly, Jimmy Johnson's version comes in more from the blues side and Syl's, naturally, comes in from the soul side......two different ways of accomplishing the same thing.  In 2003, the brothers got together on a disc, the cleverly titled Two Johnsons Are Better Than One.  It's an excellent disc for both.  They do several songs together, then an equal number of their own individual tracks.  They released a live disc, Brothers Live, a few years later, but have been away from the studio since then.


Jimmy, now 83, and Syl Johnson, who just turned 76, are both still active, performing together and separately when they get a chance.

Syl Johnson has several compilations of his music.  There's one that captures his Twilight/Twinight recordings, and one that collects his Hi Records output as well.  For those who want a little more, The Complete Mythology captures all of his pre-Hi releases in a mammoth box set.  The later recordings with Delmark and Antones are also worth a listen.  He's lost very little of his game over time. 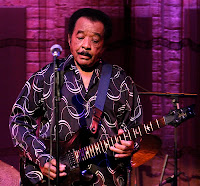 Unfortunately, there's not a compilation of Jimmy Johnson's recordings yet, but they are uniformly good.  Bar Room Preacher is my favorite, but Johnson Whacks and I'm A Jockey are not very far behind in the pecking order.