All is well on the computer front for now.  It's time for FBF's annual Top Discs You  Might Have Missed for 2011, a proud annual tradition at Friday Blues Fix for at least the past two years.  If you're interested, my Top Ten Albums for 2011 can be seen in the upcoming issue of Blues Bytes, but for now, below are several outstanding recordings that might have slipped past you during the hectic year (and haven't been discussed here previously), but definitely need to be heard.  As always, fleshed-out reviews of these discs can be seen in past, present, and upcoming issues of Blues Bytes. 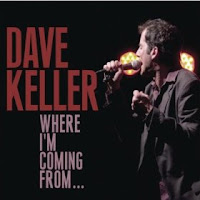 Dave Keller - Where I'm Coming From.... (Tastee-Tone) - I first heard Keller on Ronnie Earl's Living In The Light disc in 2009.  Keller contributed a masterful cover of Bob Dylan's "What Can I Do For You," on that release.  Keller has also recorded solo and his most recent effort is a wonderful set of soul covers, most of them not-so-familiar to the average fan.  Keller does a masterful job on lesser-known titles from Bobby Womack ("More Than I Can Stand"), Syl Johnson ("Steppin' Out"), Percy Sledge ("That's The Way I Want To Live My Life"), O.V. Wright ("Are You Going Where I'm Coming From"), James Carr ("Pouring Water On A Drowning Man"), and Otis Clay ("You Hurt Me For The Last Time") and with incredible backing from the Brooklyn soul ensemble, The Revelations.  I've had a hard time getting this one out of my CD player over the past few weeks.  Chances are that you will, too. 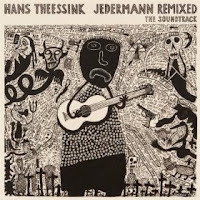 Hans Theessink - Jedermann Remixed: The Soundtrack (Blue Groove):  Theessink is considered to be one of the best blues/roots guitarists in the world and the Dutch guitarist has built an impressive catalog of recordings, instructional DVD's and books, and memorable performances around the globe.  Drafted to provide the soundtrack to Jedermann, a movie adaptation of the Austrian play, Everyman, Theessink produced a mix of original songs and covers of familiar blues and roots tracks from artists like Memphis Slim, Bo Diddley, Tom Waits, Jagger/Richards, and Johnny Cash that captures the mood of the play perfectly and also gives you a glimpse of sorts at the inner Theessink as well.  The guitarist performs solo tracks and band tracks and his guitar and deep, harrowing vocals are on top of it all.  Though this is sold as a "soundtrack," it's really an amazingly personal release that serves as a great introduction to Hans Theessink if you're not familiar with him. 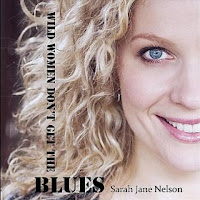 Sarah Jane Nelson - Wild Women Don't Get The Blues (CDBY):  This is a laidback, relaxed session of backporch blues, courtesy of Sarah Jane Nelson, guitarist/vocalist Michael "Hawkeye" Herman, and harmonica player Big Irv Lubliner.  You will be familiar with the majority of the setlist, but Ms. Nelson gives new life to assorted recordings by Ida Cox, Billie Holliday, Jimmy Reed, Robert Johnson, George Gershwin, and T-Bone Walker.  How's that for a diverse set of songs?  This reminds me more than anything of buddies getting together on a Sunday afternoon to play their favorite tunes, with themselves as the appreciative audience.  Of course it doesn't hurt that Nelson is one talented singer, either. 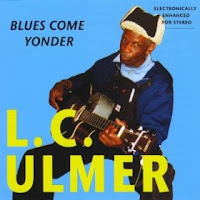 L. C. Ulmer - Blues Come Yonder (Hill Country):  Finally, somebody decided to get Ulmer in the studio after his appearance on the M for Mississippi documentary, and boy, was he ever ready when he got there.  Mixing guitar with banjo and mandolin, Ulmer works through a wonderful set of blues that blend Hill Country trance-like grooves with upbeat and danceable folk songs as well as Delta and even a little bit of converted country-gospel (Hank Williams' "I Saw The Light").  Like most recordings of this type worth hearing, Ulmer's love for the music comes shining through and really makes a good recording great.  I hope that we get to hear more from the 83-year-old soon. 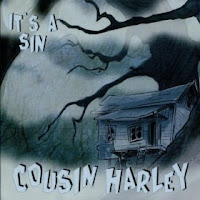 Cousin Harley - It's A Sin (Little Pig):  The best rockabilly record I've heard in a while came this year from Vancouver native Paul Pigat, a roots music guitarist and singer who's played with folks like Jakob Dylan, Neko Case, Jim Byrnes, and the Sojourners.  It's A Sin is as rough and rowdy as rockabilly gets, with a few sidebars into jump blues and surf music thrown in.  These guys are so good that it's enough to make you wonder how the music ever fell out of favor in the first place.  Then again, these guys could lead the charge to bring it back into vogue.  Meanwhile, just sit back, no....stand up, and enjoy the ride. 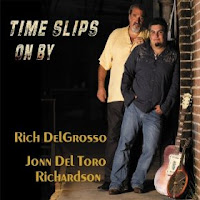 Rich DelGrosso/John Del Toro Richardson - Time Slips On By:  I've only recently discovered blues mandolin.  Rich DelGrosso is one of the few mandolin players in the blues right now, continuing a tradition started by Yank Rachell, Charlie McCoy, and Johnny Young.  On his latest release, he teams up with Houston-area guitarist John Del Toro Richardson for a tight 14-song set of originals.  Most of DelGrosso's tunes, though they vary greatly in arrangement, are on the traditional side of blues, while Richardson's songs run the gamut from blues to roots to soul to jazz.  Overall this is a solid set of roots and blues music, made even more distinctive by the presence of the mandolin.  Very enjoyable. 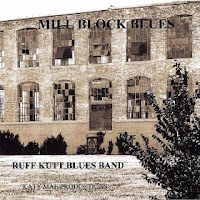 Ruff Kutt Blues Band - Mill Block Blues (Katy Mae Productions):  This is a good cause to contribute to.....proceeds on the sale of this CD go to the HART Fund, a service provided by the Blues Foundation to help with medical/dental care and pay funeral expenses to blues musicians.  The music itself is first-rate with support from artists like Anson Funderburgh, Hash Brown, Andrew "Jr. Boy" Jones, and loads of talent from many Dallas area musicians, such as Dempsey Crenshaw, Michael Schaefer, Wes Starr, and Christian Dozzler.  This is as solid a set of Texas-based blues as you will find, and for a worthwhile cause to boot. 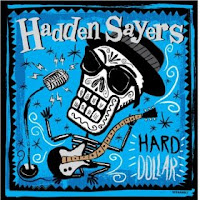 Hadden Sayers - Hard Dollar (Blue Corn):  Sayers returned from a brief hiatus to release this beauty of a recording that ably blends Texas blues with rock and the sounds of the swamp.  In addition to being a fine guitarist, he's also a pretty good songwriter too, including the rocking opener "Take Me Back To Texas," his duet with Ruthie Foster, with whom he's worked over the past few years ("All I Want Is You"), and a nice tribute to the women of his home state ("Sweet Texas Girls").  After much too long an absence, it's great to have Hadden Sayers back on the scene and it sounds like he's as glad to be back as we are to have him.
Posted by Graham at 12:01 AM