Fifteen or sixteen years ago, I was wandering through my local record store in search of some new blues albums.  I happened to stumble onto a album by a group called The King Brothers called Turnin' Up The Heat.  It was on a record label, Vent Records, that was based about 150 miles away in Birmingham, AL.  I had previously purchased a pretty darn good album from Vent Records by an Arkansas-based guitarist named Michael Burks, so I decided to give The King Brothers a spin.

It proved to be a wise decision on my part.  The brothers managed to combine their love of the blues with a fierce rock and funk mix that really lifted their original songs above your average fare.  Turnin' Up The Heat was a couple of years old when I picked it up, but it really got my attention and got me to looking for their second release, Mo' Heat, which had been issued on Hard Attack Records around 2001, but I wasn't able to track it down.  Still, Turnin' Up The Heat managed to get fairly steady rotation on my playlist over the years, and I always figured I'd be able to track down their next release.

A couple of months ago, I was not only able to finally get to hear Mo' Heat, but also their newest release, the excellent Get Up and Shake It, the brothers' first release in about fifteen years.  Where the duo's first two releases were all originals compositions, their latest album consists of the brothers' imaginative recreations of seven blues classics, along with three King Brothers originals, two of which are instrumentals.

The King Brothers are guitarist/vocalist Lee King and drummer/vocalist Sam King.  The brothers have been playing together since elementary school.......about 60 years, give or take.  Later on, brother Lee began playing with Ike Turner and Big Joe Turner, and later they joined up to back Albert King, Lowell Fulson, Jimmy McCracklin, and their second cousin, Freddie King.  McCracklin, in particular, was a big influence on the youngsters, as much for his wardrobe as for his music, but their muscular, guitar-driven attack brings to mind another pair of Kings.....Albert and Freddie.

Both brothers appeared on Albert King's classic Blues at Sunrise album, and Albert King presented Lee King with his prize guitar, Lucy, in 1992, just a few days before he passed away......a proverbial passing of the torch.  Lee King played the guitar extensively on Turnin' Up The Heat and recalled:


"We were hanging around in the dressing room when Albert came off stage.  He told me he wasn't feeling well and said he might have to go to the hospital to have some bypass work done.  Then he gave me the guitar and said, 'Here, take this thing and play it.'  I was shocked.  I grabbed him and hugged him, but he kind of turned away because he wasn't the hugging type.  Then they called him out to do an encore, and he took the guitar back and told me and Sam to come with him.  We stood back in the wings and then he motioned for us to come out.  He gave me the guitar again, in front of everybody.  Again, I was shocked.  I didn't know how to thank him enough, but he told me that he just wanted me to carry on the blues.  And that's what I'm doing."


The brothers were raised in the San Francisco Bay area, but they have a firm and unique grasp on the music that makes it feel like they were born and raised down south in the land where the blues began, a quality that eludes many other performers of similar talent.  When asked to describe their brand of blues music, Lee King explained,


"It's danceable, it's rock-flavored, funk-flavored, and gospel-flavored.  I don't know a damn thing about picking cotton; I don't drink whiskey; I don't dip snuff; I don't fit into any of those bluesman stereotypes.  I do blues the way I feel it."

Turnin' Up the Heat was a big surprise to many blues fans when it hit stores in the mid 90's.  It mixed the genres that Lee King mentions above and did so with some very strong original songs.  When Mo' Heat followed a few years later, it improved on all the high points of its predecessor.

Though the duo didn't return to the studio for an extended period, they didn't exactly sit back and relax.  They continued to perform during that time span and hone their craft.  Though many of the songs on Get Up And Shake It will be familiar to seasoned blues fans ("Hoochie Coochie Man," "Rock Me Baby ," and a couple of tunes previously recorded by their cousin Freddie....."Bigg Legged Woman" and "Tore Down"), the brothers take these songs to new places with Lee's powerhouse guitar work and Sam's propulsive drumming.

There are a few less familiar covers, too.  Bobby Rush's "Blind Snake" is really cool, and there's also a sharp take on the rocker "Hound Dog," and the Willie Dixon favorite "Close To You" is well done, too.  The three originals include two covers, "Just Driving Around" and the title track, both of which blend blues, funk, and jazz in extended jams that will get toes to tapping and heads to bobbing.  The third original, "Just The Way I Like It," is heavy on the funk/R&B side, too, and is a nice showcase for Lee King's vocals. 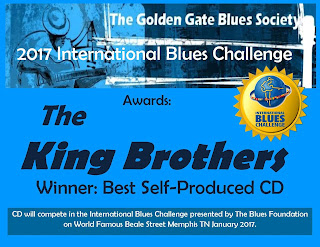 The Golden Gate Blues Society gave this album their Best Self-Produced CD award and the album will be entered into the 2017 IBC in Memphis under the same category next January.

It was really great to see that The King Brothers had returned to the studio.  I really enjoyed their debut release all those years ago, and to finally hear their follow-up, not to mention finding out that they were still actively performing and recording......well, all I can do is strongly recommend that you check out The King Brothers' catalog of recordings.....and look for Get Up And Shake It next week when FBF reveals its Top 20 Albums of 2017. 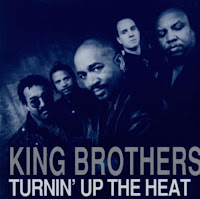 Turnin' Up The Heat (Vent Records) 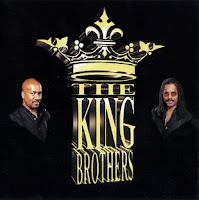 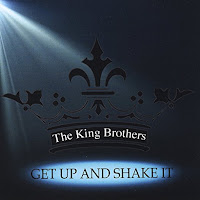 Get Up And Shake It (Club Savoy Entertainment Group)

Fantastic Review! Thank You for your appreciation of The King Brothers talent!