Today, we'll look at some new and upcoming releases, plus a few memorable performances, via YouTube. 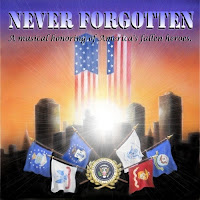 Friday Blues Fix buddy Cee Cee James recently contributed a song to Never Forgotten, a benefit compilation CD honoring America's fallen heroes during and in the aftermath of 9/11.  James contributed "Someday I'll Be Goin' Home," which she co-wrote with her husband, Rob "Slideboy" Andrews, especially for the collection.  The CD features a variety of music (30 in all), ranging from Blues, Rock, Christian, Country, and Americana, all written in appreciation for the heroes of 9/11 and the Military.  Proceeds from sales of the CD benefit the Landstuhl Hospital Care Project, Wounded Warrior Project, 9/11 Families For A Secure America, and Operation:  Troop Aid.  Cee Cee discusses her participation in the project at her website.  For more info, or to purchase the CD or selected tracks, you can visit Thank You Heroes.
Speaking of Cee Cee, Ms. James will soon be returning to the studio with legendary producer Jim Gaines manning the controls.  Gaines has produced albums for Santana, Luther Allison, Buddy Guy, Stevie Ray Vaughan, Steve Miller, the Neville Brothers, Walter Trout, and George Thorogood, so you know she's in good hands.  The new CD, called Blood Red Blues, will be out in early 2012, so keep your eyes and ears open. 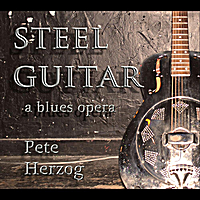 I wrote about Pete Herzog's ambitious project a few months ago. Herzog has composed a blues opera, called Steel Guitar, that is one of the most original ideas I've heard in quite some time. Herzog tracks the history of one guitar as it's passed from owner to owner, whether stolen, won in a card game, purchased or passed down from one generation to the next, using narration and music to illustrate the journey.  As the guitar passes through time and through different hands, as the liner notes state,".....its sound is colored by each person who plays it and they feel its history."  Herzog's songs give you a sense of the guitar's journey, incorporating various styles...all rooted in the blues.  It's an interesting journey and one worth taking if you're a fan of the blues or blues guitar.  Herzog recently released a double CD version of Steel Guitar, which can be purchased at his website, either as a CD or mp3.  You can also listen to samples of the tracks there.  He has a nice, easygoing style whether narrating the entertaining back stories or singing the songs.  Hopefully, in the future, he can get it released in DVD format as well, but in the meantime, give Steel Guitar a listen. 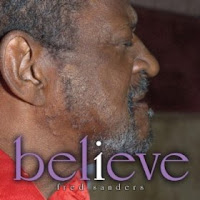 In recent years, one of my favorite CDs has been Fred Sanders' Long Time Comin'.  The Memphis guitarist really nailed it on that disc, with some wonderful Memphis blues and soul.  His muscular guitar sound and his raspy, soulful vocals made it a disc worth hearing, as I mentioned in an earlier post.  Sadly, Sanders has battled lung cancer over the last few years, and he passed away earlier this year after suffering a stroke.  He had been working on an album for I55 Productions, the label that earlier reissued Long Time Comin' after it went out of print, and it was released just a couple of weeks after Sanders' death.  The new album, called I Believe, picks up where its predecessor left off, with those greasy, gritty Memphis blues mixed with a touch of soul, funk, and even some jazz.  While Sanders' singing sounds as strong as previously, there are several instrumentals featured this time around that really allow him to show his guitar chops as well, which really put a modern twist on traditional blues guitar.  Unfortunately, these two albums are all the recordings we have of Fred Sanders, but you can't do much better than this pair to get a taste of how they play the blues in the Bluff City.  Hopefully, in the near future, we will look at some other essential recordings of Memphis Blues.


Some of the first Blues that I ever heard was, believe it or not, on the Tonight Show (probably B. B. King).  One good thing about Johnny Carson was that he booked some great music from many different genres, therefore exposing a lot of young listeners (because it was a BIG deal to get to stay up long enough to watch the Tonight Show back in the day) to a lot of different styles of music.  Jay Leno has continued that tradition for the most part and David Letterman and Arsenio Hall did the same thing.  As we sign off today, check out these tunes culled from the late night shows over the past couple of decades.


Bobby Womack, from David Letterman, roaring through "It's All Over Now." I can remember seeing this one when it first aired.

Stevie Ray Vaughan on the Tonight Show, circa 1990.


Brother Ray, from 1987 on the Tonight Show, playing "Mississippi Mud."