It's been a few weeks since Friday Blues Fix looked at a few new releases, so here's a preview of five of my recent favorites, with more to come in a week or two.  As always, more comprehensive reviews of these albums will follow in a few weeks at Blues Bytes, THE online monthly magazine of blues CD reviews.

I've got a huge stack to work through over the next few weeks.......maybe months, so when I get a few minutes, I'm trying to listen to a new release and write it up.  The process for reviewing a CD, at least for me, is pretty straight-forward.  I usually spend a couple of days, maybe three, listening to it.......not a solid three days, but several times a day......at home, at work, in my truck during the day, etc....  By doing this, I sometimes get behind, but by doing it this way, I feel like I'm able to find things that I might have missed with just a couple of listens. 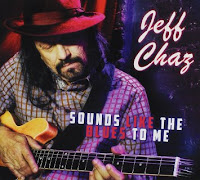 Jeff Chaz - Sounds Like The Blues To Me (JCP Records):  This is New Orleans blues man Chaz's first album of new material since 2006's In Exile, and to me, it's his best release yet.  Chaz, like many Crescent City residents struggled to recover from the effects of Hurricane Katrina, but based on this release, all of that is behind him.  If you're not familiar with Chaz and his music, this is a great place to start.  He's a fantastic guitarist, mixing traditional and contemporary styles, and a fine vocalist, who can play it tough or tender with ease.  Chaz wrote or co-wrote all twelve tracks on this new release and he touches on a number of styles from New Orleans style blues to T-Bone Walker-esque slow burners to Albert King/Otis Rush-based muscular guitar to the finest urban blues this side of B.B. King.  Though he's influenced by all of these guitarists, he manages to blend them into a style all his own.  Anyone who digs blues guitar played well really needs to check out this disc, and will probably want to check out Chronicles, a retrospective of his previous albums that was released last year. 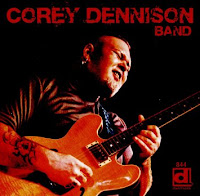 Corey Dennison Band (Delmark Records):  Dennison served as rhythm and lead guitarist in Carl Weathersby's band for twelve years before forming his own band in 2013.  A Tennessee native, Dennison's Delmark debut is a mix of blues, soul, and southern rock and is simply marvelous, and while he's a very versatile guitarist, he's a powerful vocalist who can easily  handle songs in all three styles.  His rock solid band includes former Nick Moss sideman Gerry Hundt, who serves as co-writer on several of the originals.  The mix of soul and blues is just perfect, which is what makes this disc such a standout.....that and the musical and vocal talents of Dennison.  Seek this one out at all costs! 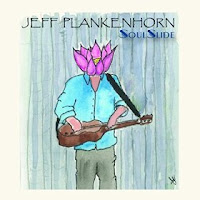 Jeff Plankenhorn - SoulSlide (Loungeside Records):  Austin-based guitarist Plankenhorn has played with an impressive list of artists, including Joe Ely, Ruthie Foster, Ray Wylie Hubbard, and Bobby Whitlock.  He plays a stand-up lap steel guitar of his own invention, called "The Plank" (Plankenhorn's nickname).  Having learned to sing in church as a youngster, Plankenhorn incorporates gospel into his music, which also takes in blues, soul, and rock influences and combines the better parts of Sacred Steel music and Dobro music of the Jerry Douglas variety.  Sound good?  Well, it is!  Plankenhorn's latest features some irresistible original tunes (some co-written with Grammy winner Gary Nicholson) and some dynamic covers.  There are also some notable guest stars including Foster and Texas soul belter Malford Milligan.  Not that Plankenhorn needs much help.......his guitar work is amazing, as are his vocals.  Plankenhorn is a favorite in Austin music circles.  Hopefully, this album will expand his base considerably, and deservedly so. 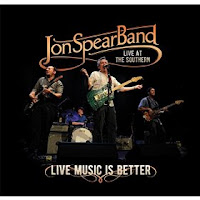 Jon Spear Band - Live Music Is Better:  Virginia-based singer/guitarist Spear and his talented band released their debut, Old Soul, in 2015, an album which finished in the Top 25 of the Roots Music Report's Top Contemporary Blues Albums.  Spear's been around since the early 60's, but recently connected with a phenomenal young talent, singer/guitarist Dara James, who is a blues star in the making......a gifted guitarist, singer, and songwriter whose style works perfectly with Spear's.  This set was recorded last November at the Southern Cafe' & Music Hall in Charlottesville, VA and features four songs from their debut album, along with seven well-chosen covers from a wide range of artists......The Meters, Delbert McClinton, Warren Haynes, Michael McDonald, plus a couple of blues standards.  Keyboard master Adrian Duke also guests on several tracks, as does sax man Haywood Giles.  One of several really good live recordings recently issued, Live Music Is Better provides a great look at one of the most underrated bands currently practicing. 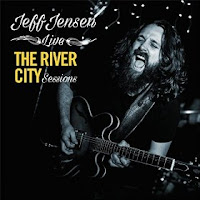 Jeff Jensen - The River City Sessions (Swingsuit Records):  We had a nice Ten Question discussion with Mr. Jensen in March of last year.  At the time, he had just released Morose Elephant, which was well-received by fans and critics alike, and was one of FBF's favorite 30 discs of 2015.  Jensen has a reputation as an energetic and engaging live performer, and this eleven-song set really captures that.  Even though you're not seeing the performance, you get a sense of the electricity simply by listening.  Featuring eight original tunes from his studio releases and three excellent cover tunes, The River City Sessions was recorded live at Ardent Studios in Memphis before an enthusiastic group.  It should encourage new listeners to check out some of Jensen's formidable catalog and provides longtime fans with a live document of his considerable talents.  Jensen's one of the best new blues performers out there and this fine release should confirm that for those undecided.

That's all for now.  Be sure to check back in a couple of weeks for info on more new releases.

Congrats to Jeff Chaz you have come a long way since the early days on beale st in the mid 80's. A old friend