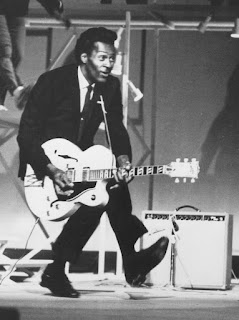 Sunday was Chuck Berry's 89th birthday.  Simply put, without Chuck Berry, the world of modern music would not be the same.  He did more to shape rock & roll than any other musician.  There's no way that I could state this any better than the late Cub Koda did at AllMusic.com in his biography of Berry:

Of all the early breakthrough rock & roll artists, none is more important to the development of the music than Chuck Berry. He is its greatest songwriter, the main shaper of its instrumental voice, one of its greatest guitarists, and one of its greatest performers. Quite simply, without him there would be no Beatles, Rolling Stones, Beach Boys, Bob Dylan, nor a myriad others. There would be no standard "Chuck Berry guitar intro," the instrument's clarion call to get the joint rockin' in any setting. The clippety-clop rhythms of rockabilly would not have been mainstreamed into the now standard 4/4 rock & roll beat. There would be no obsessive wordplay by modern-day tunesmiths; in fact, the whole history (and artistic level) of rock & roll songwriting would have been much poorer without him. Like Brian Wilson said, he wrote "all of the great songs and came up with all the rock & roll beats." Those who do not claim him as a seminal influence or profess a liking for his music and showmanship show their ignorance of rock's development as well as his place as the music's first great creator. Elvis may have fueled rock & roll's imagery, but Chuck Berry was its heartbeat and original mindset. 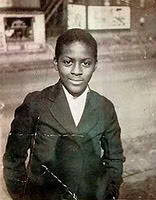 Berry not only was an influence on rock & roll, but also other genres.  His sound mixed country & western with blues and the era's R&B and the final musical product ended up reshaping each of the genres in different ways.  However, it was with the blues that Chuck Berry got his start as a youth in St. Louis, where he was born on October 18, 1926.  He was born to a middle-class family.....his father was a contractor and his mother was a public school principal and he was raised in a middle-class neighborhood called The Ville.

The fourth of six kids, Berry did well in school and he developed a love for poetry and music, most notably the blues.  In 1941, he began performing publicly and soon won a talent contest with a rendition of Jay McShann's "Confessin' The Blues."  In the mid 40's, Berry got in with the wrong bunch and was arrested for robbing three stores and stealing a car, and was sentenced to three years in reform school in Jefferson City.  While there, he formed a singing quartet, which became good enough that the authorities began to allow them to perform outside the facilities.  He was released in 1947 when he turned 21. 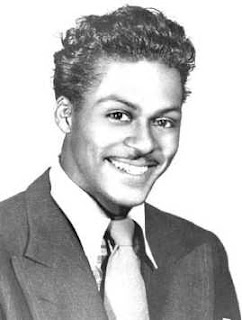 Berry had been playing guitar since his teens and he was influenced, as many other guitarists were during that time, by T-Bone Walker.  Walker's guitar playing and his showmanship made an impact on the young Berry, as did the music of Muddy Waters.  He also took lessons from some of the local musicians and he was soon playing with the local bands in many of the St. Louis clubs to supplement his income.....he had married in 1948 and became a father in 1950.  In addition to music, Berry worked in a couple of auto assembly plants, worked as a janitor in the apartment building in which his new young family lived, and even trained as a beautician.

Berry began playing with pianist Johnnie Johnson, with whom he would collaborate for years, around 1953 and they became the regular band at the Cosmopolitan Club.  As he began to play more frequently in front of audiences (both black and white), Berry began to observe that most enjoyed a wide variety of music and he began to try to reproduce as much of it as possible.  While most of them liked the blues and ballads in the Nat King Cole tradition, the black audiences also enjoyed it when Berry played his version of the country music that was popular with white audiences at the time, so much so that audiences began wondering who that "black hillbilly at the Cosmo" was. 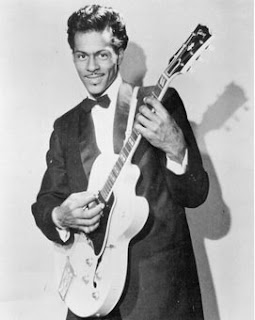 Berry combined his musical mix of country, blues, and R&B with his rapidly developing showmanship and his smooth vocal style and began to attract more and more listeners.  At that point, he decided that he wanted to make records, so he went to Chicago and managed to have a short conversation with Muddy Waters, who encouraged him to contact Leonard Chess of Chess Records.  Berry had made a demo tape that he gave Chess to listen to, thinking that Chess would be mostly interested in his blues material.

However, Chess was partial to one of the "hillbilly" tunes that Berry had put on the demo, an old country & western tune called "Ida Red," that had been recorded by Bob Wills.  Chess realized that the old R&B market was shrinking and was wanting to expand beyond it.  With Berry, Chess believed he had found just the man to do that, so he had him record an adaptation of "Ida Red," called "Maybellene," with Johnson on piano, in May of 1955.  The result was a million seller that made #5 on the R&B charts and the mid 20's on the pop charts.  I can't imagine the excitement that listeners felt when they first heard "Maybellene."

The rest, as they say, is history.  Chess had managed to produce, through the talents of Berry, a black rock & roll record that would appeal to blacks, to white teenagers, and to Southern country musicians (including one Elvis Presley, who would strike it big the next year).  The B-side to "Maybellene" was a slow blues number that is one of my favorite Chuck Berry tunes, "Wee Wee Hours."  I just love Johnnie Johnson's piano on this tune. 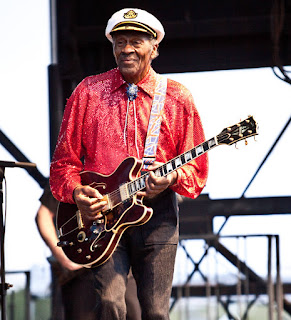 Chuck Berry was on his way to becoming a rock & roll legend.  His music was a huge influence on many of the British rock bands who hit big in the 60's, as well as many American rock & rollers from the same era.  Berry recorded for Chess through the 60's and, despite several setbacks, including a couple of additional stints in prisons in the late 50's and later in the late 70's, he remained a huge attraction.  He was one of the first inductees into the Rock & Roll Hall of Fame in 1986.  Even now, at the age of 89, he still plays at least once a month in St. Louis.

During his tenure with Chess Records, Berry continued to include a few blues tracks on his Chess albums.  These recordings prove that he would have been among the blues greats of his era, had he chosen to pursue that route.  However, I think it's safe to say that he chose the right musical path for himself and for music lovers around the world.

There are many collections of Chuck Berry's music that have been released over the years.  What I'm presenting here would serve as either a starting point for a serious collector or, if you're a more casual listener, it could actually be all the Chuck Berry you will ever need. 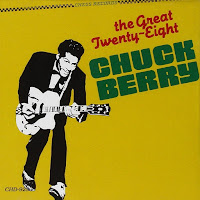 The Great Twenty-Eight (MCA/Chess):  It should be a requirement that every household own at least one copy of this album.  This captures what Chuck Berry meant to the music world, particularly the rock & roll music world, better than any single disc collection could ever hope to do.  This has all of the great rock & roll songs from Berry....there's not a bad track on the disc and nothing below outstanding.  If you don't have it, go get it right now. 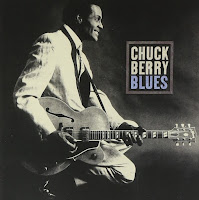 Blues (MCA/Chess):  Despite the greatness of the above disc, Berry's blues recordings had never really been the focus of any collection until this set came out in 2003.  There are 16 tracks here that feature Berry's blues roots, including his reading on a few classics of the genre.  It's proof positive that Berry would have made it just fine had he stuck exclusively to the blues. 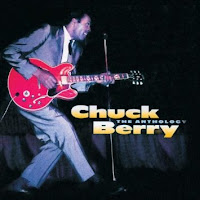 The Anthology (MCA/Chess):  This two-disc, 50 track set collects all of the tracks from The Great Twenty-Eight, plus many of the songs from Blues as well, plus a few other standouts.  It does also contain "My Ding-A-Ling," which, tragically, is Berry's only #1 hit and basically serves as the proverbial turd in the punch bowl on his musical legacy.  If you want to explore Berry's catalog further, pick this one up, but you'd be just fine with the two discs above.