It's All About Respect


Imagine this.....you're traveling across the country in a bus, beginning at one end of the country and weaving your way to the other end, stopping every couple of days to make public appearances and give a performance to a huge crowd of people.  Imagine that you're also dealing with a few health issues, like Type 2 Diabetes or high blood pressure or poor circulation while you're on this journey.  Imagine having to sleep either in the bus or in a different hotel every night while you're doing this.  Got it?  Good.  Now, imagine that you're doing all this, plus you're five months away from YOUR 89th BIRTHDAY!!!

B.B. King made the news last week when a St. Louis Dispatch article was published that reviewed a recent performance at the Peabody Opera House.  The article stated that King was nearly 45 minutes into the show before he played a song, talking incoherently and inaudibly at times, flirting with ladies in the front rows, then playing somewhat erratically, forgetting lyrics here and there, and launching into a 15-minute singalong of "You Are My Sunshine."  By that time, the article read, some in attendance began to heckle, shout out requests, shout encouragement, and even leave the performance.  King rebounded after a few minutes and launched into "The Thrill Is Gone," but he only played a couple more songs before calling it a night.

Looking at comments on some of the various pages that ran the article (which was not a mean-spirited story at all....very fair-minded), most fans were understanding, some were a bit frustrated, and a few were aggravated.  King's management released a statement earlier this week, explaining that the Peabody show was King's first in about a month (also pointed out in the article), that he had driven 24 hours from his home in Las Vegas to the gig, and that he had forgotten to take his diabetes medication before he left.

There have been other notes about King in recent months, even a column about a Dallas gig late last year that had some of the same issues, but that's not really what I wanted to talk about today. 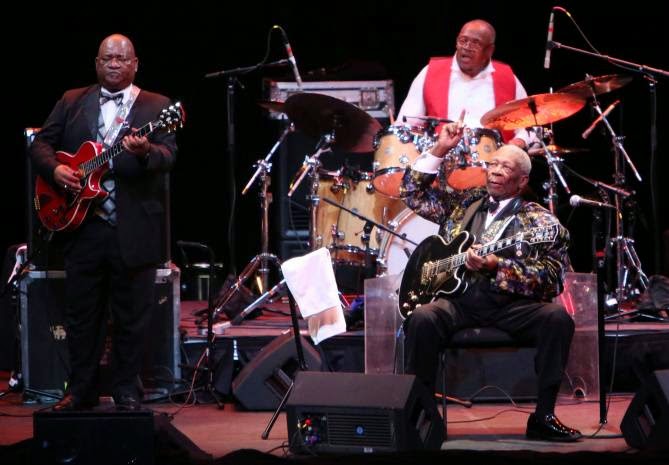 Since the 1950's, King has performed almost non-stop, only slacking up during the past couple of years.  Even in the early 90's, when he was first diagnosed with diabetes, he rarely slowed down because he was giving the people what they wanted.....an inspired performance every night.  Diabetes is a challenge to keep in check even when you're at home monitoring what you eat and drink closely.  I can't imagine how hard it would be when you're on the road most of the time and keeping odd hours all the time. 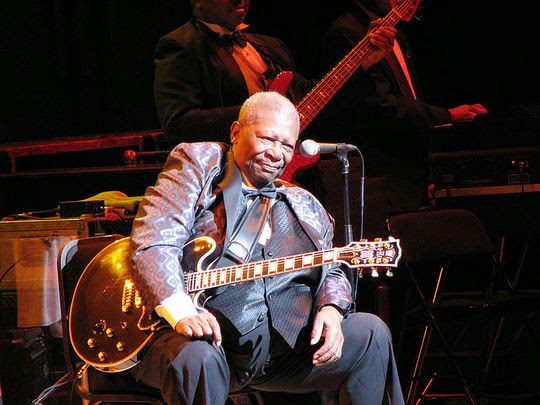 I finally got to see King about ten years ago, at a local show honoring Medgar Evers.  The show was poorly publicized and there were only about 250 to 300 people, at the most, present in a 1,000-seat venue.  King performed like he was at Caesar's Palace, for over two hours.  He sat for most of the concert, and he clowned a little bit, doing the shimmy dance in his chair, carrying on with his band members and a few in the audience, but he brought the blues with him and he and his band hit the ball right out of the park that night.  What's even cooler was that he had a meet-and-greet that afternoon, signing autographs, shaking hands, and chit chatting with adoring fans.  I also need to mention that this was Mississippi in June, so you're looking at 90+ degrees with about 1,000% humidity.  At this point, I can't remember the exact date or year, but he was pushing eighty and you never would have known it by the way he conducted himself.

Listen, I turned fifty last year and by the end of the work week, I'm ready to go to bed on Fridays at 9:00.....in the MORNING.  I can't imagine pulling a 40 hour work week when I'm pushing ninety years old!!  Yet, B.B. King still does that during certain times of the year, and his work week sometimes involves driving several hundred miles in a 24-hour period, then playing music for a couple of hours after meeting and greeting fans.

Sure, there's a good chance that King is nearly the end of the road as far as relentless touring goes.  He may be to the point where he has to consider sharing a bill with someone, maybe splitting time onstage, maybe cutting back to a couple of shows a month.  All that is highly possible.....sad to think about, but highly possible.

Whatever he decides to do, as a blues fan (and a B.B. King fan), I am cool with it.  He has more than earned the right to take a step or two back if he wants, just like he's earned the right to have an off-night occasionally, or have a few minutes during a performance that makes you scratch your head.  Regardless of what he does at a performance, whether somebody pays $75 to $100 a ticket or whatever......PLEASE DO NOT BOO OR HECKLE B.B. KING!!!!  He's EIGHTY-EIGHT YEARS OLD, for goodness sake, and he's gone above and beyond in giving us over 65 YEARS of great music and performances.

King has provided entertainment for blues and music fans since the late 40's and is still showing up for work giving it his all when many people his age (those who are still with us) are either in assisted living or are basically housebound.  People need to realize going in that an off night might be in the works, given what we know.  It's more about the opportunity to see and interact with a living legend.  That alone is worth $75 to $100 to most blues fans.  If you're not among them, maybe you should stay at home and listen to a CD of King's instead of sitting in the audience and holding a man up to higher standards than most people hold themselves to.

At the same time, maybe the people who work with King, his management and his support, could take a few things into consideration......his age, his health, his stamina.....and maybe step back a little bit on, say, ticket prices or number of performances or size of venues or length of performances.  Maybe the band, who reportedly seemed a bit bewildered by things that were happening last week, could step up and give him a little support, maybe bail him out when he gets bogged down.  That would definitely help him a lot.  He's earned the right to play as long as he wants and I'm not sure what he would do if he wasn't able to do that anymore. Hopefully, he won't ever get the chance to find out, and neither will we. 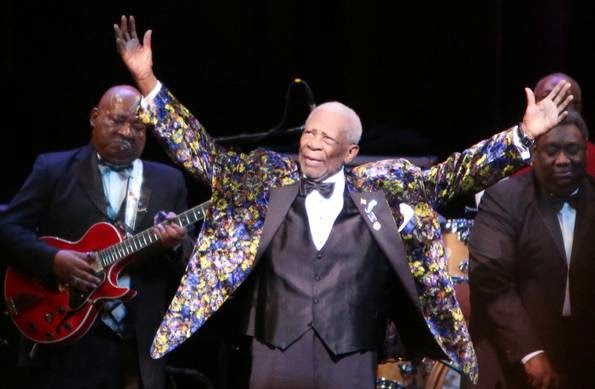