Learning about music in the late 70's and early 80's, I heard about Elmore James before I actually heard Elmore James.  I was preparing a research paper for my senior year of high school.  My paper covered the first two years of the Beatles' musical journey, focusing on their days in Germany.  One of the books I read discussed their musical influences, and of course, all of them had a diverse set of rock n' roll, R&B, soul, country, and blues influences, particularly Ringo Starr, who listed Elmore James as one of his favorites.  This naturally made me curious, because I had heard of most of the other musical influences cited, but not Elmore James, so I decided to dig a little deeper.

Now, back in those days, "digging a little deeper" was not the simple task it has become over the past decade or so, with the internet pretty accessible either at home, in a library, or a place of business.  Back in the day, at least when dealing with something music-related, it meant either going to the library and looking something up or maybe finding a recording of some sort at the local record store.  In 1980, neither was a sure bet as far as searching for blues information, and true to form, I struck out.  The only music books in our libraries were devoted to either early rockers like Elvis, Dylan, or the Beatles, so I couldn't even find enough information about Elmore James to even know where to look for him in a music store.  My paper got written and I moved on to other things that 17-year-olds enjoy to do and forgot about Elmore James.

Almost ten years later, I finally got to hear Elmore James.  I found a cassette tape of some of his recordings (the very one I discussed in last week's post) and ordered it, having never heard anything he'd ever recorded.  By that time, I did know that one of his songs was called, "Dust My Broom," and that it was an old Robert Johnson tune.  I had heard Johnson's version and, even though I wasn't sure what "dust my broom" meant, I liked it.  Still, I wanted to hear Elmore James' version. 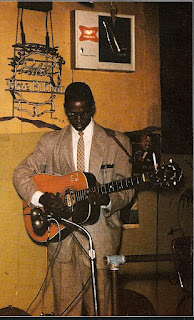 The first thing I noticed was that "Dust My Broom" was not on this collection.  Instead, there was a slight variation called, "Dust My Blues," which James recorded a couple of years later on a different label.  The second thing I noticed was that I could care less.  From the opening notes of "Dust My Blues," I was hooked!  I had heard the familiar guitar riff by now from numerous other blues artists (face it, any guitarist who's ever put a slide on his finger is going to play an Elmore James riff one way or another), but I had never heard it just like Elmore James played it.....with the fierce determination and fire he had. It was almost like the strings were being shredded sometimes.

And those vocals....loud, sometimes cracking, occasionally even hysterical-sounding.  Whatever your feelings about him, everyone who ever listened to Elmore James knew......they KNEW.....that he felt the blues to the very core of his being.  How many bluesmen over the years have stated that you can't fake the blues?  When one listens to Elmore James perform, you know he ain't faking!! 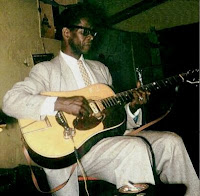 Even better, James' sound wasn't limited to that one riff, though he played it again and again and again....and then again in as many ways as he could.  His single string playing was marvelous as well, inspiring as many guitarists as his slide playing.  That's the trap that people occasionally fall in when they listen to Elmore James, and other blues artists like Magic Sam, John Lee Hooker, etc......  Artists during the 50's and 60's focused on recording singles, not albums, so sometimes in an effort to strike while the iron was hot, so to speak, artists would recycle familiar guitar riffs that were successful one time into newer songs.  At the time, people were just listening to juke boxes and these songs would come out far enough apart that nobody really paid it that much attention.  However, over the past twenty or thirty years, when artists' bodies of work are collected into albums or CDs, sometimes the repetition is easier to spot because the songs are all grouped together.  Anyway, Elmore James was no one trick pony, as evidenced by any blues fan who's looked at his catalog beyond the "Dust My Broom" riff.

Elmore James was born on January 27, 1918, in Richland, MS....there are several Richlands in Mississippi....this particular community is north of Jackson in Holmes County.  He was born Elmore Brooks, taking his mother's last name, but later took the name of his stepfather, Joe Willie James.  He began playing guitar at the age of 12, first playing a diddley bow and later making a one string instrument made out of a broom handle and a lard can.  Pretty soon, he was playing dances at country suppers and juke joints, under the name Cleanhead or Joe Willie James. 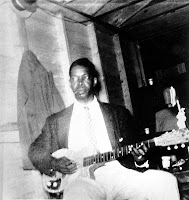 James was, like many guitarists at the time, strongly influenced by Robert Johnson and Tampa Red.  He mostly limited his working area in his early years to the area around Belzoni, MS, but would sit in with artists who were passing through such as Johnson, Sonny Boy Williamson (Rice Miller version), and even Howlin' Wolf.  Eventually, he started his own band and toured the southeastern U.S. with Williamson until Uncle Sam came calling in the early 40's during WW II.  After serving in the Navy at Guam for three years, he ended up in Memphis, working with Eddie Taylor and his cousin, Homesick James Williamson.

James soon made it back to Canton, MS, where he began developing his signature sound, working in his adopted brother, Robert Holston's electrical shop.  Using parts from the shop, he reworked his amps to the point where they produced the raw, distorted sounds that would later become such a part of rock guitar some fifteen or so years later.

Still nervous about his abilities, James recorded a single track for Lillian McMurray's Trumpet Records out of Jackson, MS in 1951.  He had previously recorded for Trumpet as a guitarist on several Sonny Boy Williamson and Willie Love tracks and McMurray cut his song at the end of one of Williamson's sessions.  James didn't even stick around long enough to record a "B" side for his single....McMurray ended up putting a local singer's track on the flip side, but the song, "Dust My Broom," became one of the biggest R&B hit of 1952 and catapulted Elmore James into the spotlight.


James ended up recording for the Flair and Modern labels soon after his big hit and those tracks were followed by a short session with Chess Records.  Also during this time, James started assembling his band, the Broomdusters, a talented group that included two former Tampa Red associates (piano player Johnny Jones and, for a spell, drummer Odie Payne), plus Homesick James on rhythm guitar, and tenor sax man J. T. Brown.  This powerful group could go head to head with any of the local Chicago bands and hold their own or better.  They were loud and proud with James' slashing slide work, Jones' muscular piano work, Homesick's solid-as-a-rock rhythm work and Brown's distinctive tenor sax.


In the early 50's, James was diagnosed with a heart condition that sometimes put him on the musical sidelines.  After he recorded several sides for Chief Records in 1957 (including the first version of "It Hurts Me Too"), his heart forced him to withdraw to Canton, MS, where he worked as a DJ and repairing radios for a time.  Soon, he returned to Chicago and cut some more sides for Chess, then released some incredible sides for Bobby Robinson's Fire label that included "The Sky Is Crying," "Look on Yonder's Wall," and "Shake Your Moneymaker." 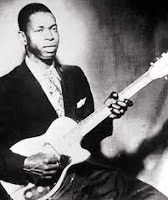 Unfortunately, James ran afoul of the musician's union in Chicago and had to return to Mississippi until things were sorted out.  When he returned to Chicago in May of 1963, James was ready to get back on track with his recording career when he suffered his third heart attack.  This one was fatal, and James died on May 24 in Chicago.  There were plans for James to participate in the American Folk Blues Festival in Germany later that year, but it was not to be.  After a wake attended by over 400 blues luminaries, James' body was brought back to Ebenezer, MS, where he was buried.  He was only 45 years old.

Though Elmore James didn't get to reap the benefits of blues recognition like Muddy Water, Howlin' Wolf, John Lee Hooker, and other contemporaries, he managed to influence blues guitarists like Homesick James Williamson, J. B. Hutto, Hound Dog Taylor, Lil' Ed Williams, and Johnny Littlejohn, rockers like Brian Jones, Eric Clapton, Duane Allman, Stevie Ray Vaughan, George Thorogood, and Jimi Hendrix (who billed himself as "Jimmy James" during his early career as a tribute).  Even today, James' influence can be heard in the music of Derek Trucks via his connections with his own band and the Allman Brothers. 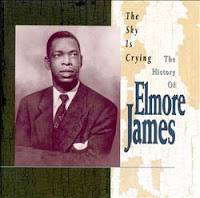 Elmore James left a pretty impressive body of work for multiple labels over a short time.  It has been collected many times over in various formats.  Some of his best Meteor/Flair/Modern tracks can be found on Let's Cut It:  The Very Best of Elmore James.  His Fire and Enjoy sessions have been assembled by Collectables (in three volumes), and his Chess sides have also been collected frequently.  However, the disc that captures most of his best material and covers the entire length of his recording legacy is Rhino's The Sky Is Crying:  The History of Elmore James.  It's track after track of sheer brilliance and should be part of every blues fan's collection.  I strongly encourage you to dig a little deeper though.

This is an excellent blog! Well-researched articles and lots of listening opportunities. I also enjoyed your Guitar Slim post.

Thanks! Appreciate the support. Glad you're enjoying it!!