I first heard Booker T. & the MG's on the American Graffiti soundtrack.  I was probably sixteen or seventeen and had started getting into 50's and 60's rock & roll, then rhythm & blues.  It was next to impossible to hear any of it where I lived except on Sunday nights, when WLAC out of Nashville would play an oldies show for a couple of hours.  One day I found the Graffiti soundtrack in the budget rack at my favorite record store.  There were plenty of great old school songs on there, but my favorite of them all was the MG's ultra-smooth, ultra-funky "Green Onions."

From there, I found a Booker T. & the MG's cassette tape with that song and many others on it.  From there, I started getting into the Memphis soul sound that the band was such a large part of developing.  If you've listened to anything recorded in Memphis during the 60's, chances are that Donald "Duck" Dunn played bass on it (although, ironically, he didn't play on the actual single release of "Green Onions"....Lewie Steinberg played bass on that track and was the bass player for the band during their beginnings until 1965).

As a member of Stax Records' house band, Booker T. & the MG's, Dunn started out with his friend, Steve Cropper, in the band, the Mar-Keys, playing clubs all over the Memphis area, influenced by all the great R&B being played in the Bluff City.  Later, he backed soul legends like Otis Redding ("Sittin' on the Dock of the Bay"), Wilson Pickett ("In the Midnight Hour"), Sam & Dave ("Soul Man"), Eddie Floyd ("Knock on Wood"), and, of course, dozens of Booker T. & the MG sides that sound as great now as they did back then.

Dunn also provided the groove for blues master Albert King's Stax recordings, including "Born Under a Bad Sign," "Crosscut Saw," "Laundromat Blues," and many others.   He remained with Stax until the label folded in the mid 70's, moving on to be an in-demand session player and producer. 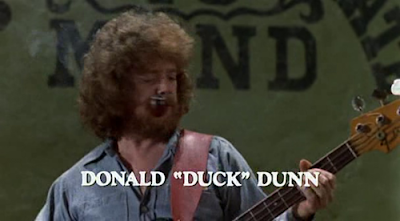 Most blues fans also recognize him as the pipe-smoking bass player in the Blues Brothers band and movies and he did play with them for many years, but he also appeared on recordings by Rod Stewart, Eric Clapton, Muddy Waters, Bob Dylan, Stevie Nicks (on her duet with Tom Petty, "Stop Draggin' My Heart Around") and many others during the same time.

In more recent years, Dunn had still been playing with Cropper.  The two of them reunited with Booker T. Jones to serve as the house band during Clapton's 2004 Crossroads Guitar Festival.  The three of them continued to perform (with drummer Steve Potts) as Booker T. & the MG's.  He was in Japan as part of a tour with Cropper and Eddie Floyd when he died in his sleep after finishing a show.  He was 70 years old.

One thing I always remembered about Dunn, and the rest of the MG's was the economy in which they played.  All of them were believers in the "less is more" theory of music.....why jam every note possible into a song when a few well-placed one will say just as much and say it more effectively.  The music collection of any blues fan should include at least one Booker T. & the MG's recording, and Donald "Duck" Dunn is a big reason why.


I've had a lot of excellent new CDs cross my path over the past few weeks, some of which you can read about in the upcoming May edition of Blues Bytes.  FBF will look at a few of these new arrivals over the next few posts. 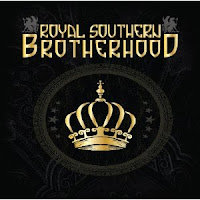 Over the years, there have been lots of "all-star" bands, consisting of members of other groups who collaborate to make music that may be a bit different from what they usually produce.  While many times, the results can be less than stellar, in the case of the Royal Southern Brotherhood, everything falls right into place.  RSB consists of Cyril Neville of the Neville Brothers, rock/blues singer/guitarist Mike Zito, singer/guitarist Devon Allman (Gregg's son), bass player Charlie Wooton of the Woods Brothers, and drummer Yonrico Scott of the Derek Trucks Band.

Their debut release, on Ruf Records, is a first-rate set of tunes.  Neville, Zito, and Allman take turns behind the mic and the twin-guitar attack of Zito and Allman is awesome.  While I was very familiar with Neville and enjoyed Zito's recent Pearl River CD, Allman was a pleasant surprise and hopefully, this appearance will get him some much deserved attention.  If you like Southern blues/rock and the New Orleans funk so prominent in the Neville Brothers' sound, this CD offers both in healthy doses.