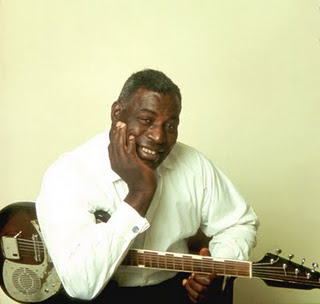 "When I heard Howlin' Wolf, I said, 'This is for me.  This is where the soul of man never dies." - Sam Phillips

I wonder what went through Sam Phillips' mind when he saw Howlin' Wolf walk into his Memphis recording studio back in 1950.  I mean, he had heard Wolf on his radio show, and he had probably even seen him before, but walking through the door toward him, standing 6' 3" and nearly 300 pounds, the Wolf had to be quite an imposing, and imtimidating sight.  Whatever Phillips thought when he saw the Wolf probably couldn't hold a candle to whatever he thought when he heard him behind the microphone, as he snarled his vocals and breathed fire through his harmonica.

﻿﻿
Howlin' Wolf was the blues' version of Mr. Hyde.  He was the music at its most raw and primal.  He had the rare ability to rock his listeners to their knees and scare the devil out of them at the same time.  I can remember that series of Raeburn Flerlage photos of him in action at Sylvio's, and how he seemed to glide across that postage stamp of a stage like a man half his size, with an almost childlike pleasure at being able to do what he was doing....perform for his audience, who were probably watching in wonder, mixed with a little fear, trying to figure out what he was going to do next.

Howlin' Wolf was born Chester Arthur Burnett near West Point, MS in June, 1910.  His parents split up when he was young and his mother threw him out of the house when he was still a child because he wouldn't work around the farm, so he lived with his uncle for awhile.  After his uncle treated him badly, he ran away and found his father, where he ended up living happily. 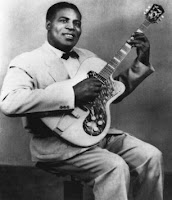 Wolf's father was a farmer and for a while, it appeared that the son might follow in the dad's footsteps.  However, his path crossed that of Delta blues legend Charley Patton and everything changed.  Every night, he would listen to Patton play outside of a local juke joint.  From this experience, the Wolf was able to pick up on Patton's inimitable growl and his showmanship.  He learned harmonica from Rice Miller (Sonny Boy Williamson II), who had married Wolf's half-sister.  Miller taught him the basics of harmonica and by the early 30's, Wolf was performing, mostly as a Patton imitator, but he was also influenced by other artists at the time, such as Tampa Red, Blind Lemon Jefferson, Tommy Johnson, Blind Blake, Ma Rainey, and country music star Jimmie Rodgers.  Wolf tried to emulate Rodgers' famous "blue yodel," but it came out sounding more like a growl or howl.

Wolf continued throughout the 30's, performing solo and performing with others, like Honeyboy Edwards, Floyd Jones, Johnny Shines, Robert Lockwood Jr., Son House, and even Robert Johnson.  In 1941, he was inducted into the Army, but was discharged in 1943, without ever going overseas, because he found the adjustment to Army life too challenging.  He returned to farming with his family around West Memphis, Arkansas, while continuing to perform on the weekends.

By 1948, he had formed a band with guitarists Matt "Guitar" Murphy (who helped Wolf improve his guitar playing) and Willie Johnson and a piano man remembered only by the name, "Destruction."  Wolf hosted a 15-minute radio show at KWEM in West Memphis, where he promoted his appearances, sold farm equipment and gave farm reports.  By now, his band's sound was expanding to include electric instruments and Willie Johnson's highly combustible guitar style complemented Wolf perfectly.

In 1950, his radio show was heard by Sam Phillips, who eventually recorded Wolf in his Sun Records studio.  These recordings, which captured Wolf's raw urgency and passion nearly perfectly, were sold to TWO record labels....the Bihari brothers' RPM Records in California and Chess Records in Chicago.  He had two hits at the same time on two record labels, who were now fighting over him.  Wolf ended up with Chess Records and made the permanent move to the Windy City.
﻿

Wolf's next recording session for Chess had more of an urban Chicago sound that his previous recordings, in part due to the addition of Hubert Sumlin's guitar to the band.  Sumlin started out as a rhythm guitarist, but gradually became as big a part of the Wolf's sound as the Wolf himself.  His guitar style can best be summed up as unorthodox....he rarely played chords, skittering terse, stinging notes all over the place, sometimes even over Wolf's vocals.  Other than a brief stint in Muddy Waters' band in the mid 50's, Sumlim remained a vital part of the Wolf's band for the duration.


The Wolf enjoyed a large amount of success in the 50's, charting with four of his songs ("How Many More Years," "Moanin' At Midnight," both from his early recordings, the immortal "Smokestack Lightning," and the ominous "I Asked For Water (She Gave Me Gasoline)").  As he moved into the 60's, Wolf enjoyed success with "The Red Rooster," "Evil," "Spoonful" (a variation of an old Charley Patton tune), "Back Door Man," "Wang Dang Doodle," and "I Ain't Superstitious."

Many of these tunes were written by Willie Dixon, who teamed up with Wolf in the late 50's/early 60's and gave the bluesman's career a bit of a boost.  From the 60's onward, Wolf mostly recorded Dixon songs, many of which became standards over the years and were covered by many different rock bands of the 60's, notably Cream, Jeff Beck, the Doors, and the Rolling Stones, whose version of "The Red Rooster" went to #1 in England.

Also during this time, the Wolf took part in the American Folk Blues Festival tour in Europe in 1964 and also appeared on the TV show Shindig!  The Rolling Stones had come to America to appear on the show and one of their stipulations for appearing was that Howlin' Wolf had to appear as their special guest.  He did and, with the Stones sitting at his feet and millions watching on TV, blew the place apart with a scorching version of "How Many More Years."


Over the years, Wolf enjoyed a long-running, but generally friendly rivalry with Muddy Waters.  Waters helped Wolf get work when Wolf arrived in Chicago and they actually shared a grudging admiration for each other.  Wolf did pull little stunts occasionally, like stretching out his set at the Ann Arbor Blues Festival in 1969 to prevent Waters from coming onstage, and Waters did recruit Sumlin into his own band briefly when Wolf and Sumlin were at odds.

One of the last classic tunes the Wolf did was one of his own compositions, the wondrous "Killing Floor."  Sumlin unleashed one of his most memorable guitar riffs and the Wolf's throat-shredding vocal made this one a keeper.  This song was later covered by Jimi Hendrix and Led Zeppelin (who actually claimed composer credits).
﻿﻿

The late 60's were an interesting time for Wolf.  Observing that many of the new rock bands were recording his old songs, Chess tried to "update" his sound by making a psychedelic album (which Wolf later described as dog excrement).  In 1970, he and Sumlin went to England to record a session with Eric Clapton, Bill Wyman, Steve Winwood and others.

As the 70's progressed, the Wolf's health regressed.  He suffered several heart attacks and was in a car accident which sent him flying through the windshield and caused permanent damage to his kidneys.  Bandleader and sax player Eddie Shaw began rationing his songs to about six per show and he had to schedule his appearances in proximity to V.A. hospitals, so he could receive dialysis.  He died in one of the V.A. hospitals in Illinois after surgery on January 10, 1976.

Wolf's legacy continues to this day.  If you watch sports of any kind on TV, you will hear "Smokestack Lightnin'" at least fifteen times on Viagra commercials during any televised sporting event, but his real legacy is the fact that blues acts still perform his songs, singers try to emulate him, and performers still try to match his stage presence all over the world.  They try, but no one has ever come close to matching Howlin' Wolf' on stage or recording.

I realize that these albums have been re-repackaged in recent years, putting a different cover and title on the same collections of songs (don't even get me started on this practice), but these are the formats in which I listened to these tunes on CD.  My first exposure to Howlin' Wolf was on the cassette collections that MCA released in the mid 80's (His Greatest Sides, Vol. 1 and as part of the wonderful five-volume The Blues series) that are sadly no longer in print.

There's also an excellent biography, written by James Segrest and Mark Hoffman, and a very good DVD that was released seven or eight years ago, if you want to find out even more about Howlin' Wolf. 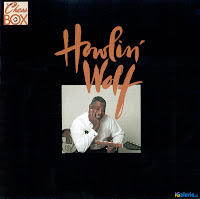 The Chess Box (MCA/Chess) - A three-disc set that is really all you can ever ask for.  One disc full of the Memphis tracks and his early Chicago sides, one disc with the bulk of his 50's hits, and one disc that wraps up with his 60's classics.  There's also a couple of cuts from an interview in 1968.  This set pretty much has all the Wolf that anyone would ever need. 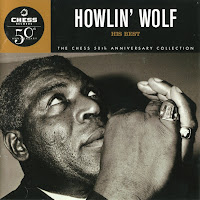 His Best, Volume 1 and Volume 2 (MCA/Chess) - These two are a good place to get started with Howlin' Wolf.  Volume 1 features 20 of his greatest sides, pretty much all a casual fan could ask for, but Volume 2 features many of his lesser-known, but equally excellent sides spanning his years with Chess.  Actually, these two discs provide a pretty complete look at the Wolf and cover the bulk of the box set at a much lower price.

He is one of my all time favorites. I am a quilter, who make clothing. I am planning a "Howlin' Wolf" coat to pay homage to him. Thanks for your post.

Send me a picture when you get it done. I'd like to see it. Thanks for visiting.

Great post. Wonderful photos and clips - thanks so much. I also love that Wolf took care of his band, and was a devoted husband and father to his step daughters. Cool guy, towering talent.