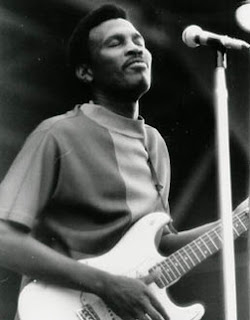 In the late 1960's, Magic Sam Meghett came about as close as any blues artist to becoming a mainstream act.  His music was the epitome of the Chicago West Side sound, with it's adventurous mix of blues and soul.  Among the other artists who brought the West Side sound to life in the late 50's/early 60's were Otis Rush, Buddy Guy, Luther Allison, Jimmy Dawkins, Eddie C. Campbell, and Eddy Clearwater, but Magic Sam's brand of West Side blues stood above the rest.
Magic Sam was born Samuel Gene Meghett in Grenada, MS on Valentine's Day, 1937.  He learned to play guitar listening to Muddy Waters and Little Walter records, and passed what he learned along to his classmate, Morris Holt (who would later become Magic Slim).  He moved to the Windy City at the age of 19, and furthered his music education, learning from neighbor and fellow guitarist Syl Johnson, who helped transform Sam's "hillbilly" style into the blues.  He started gigging in Chicago clubs, with Johnson, Johnson's bass-playing brother Mack Thompson, and gambler-turned-harmonica player Shakey Jake Harris, under the name Good Rocking Sam. 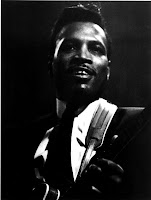 Magic Sam cut a demo of "All Your Love," but was turned down by Chess Records (one of the label's few missteps). At the urging of Otis Rush, Sam took the demo to Cobra Records and was signed by the label in 1957.  Cobra was also the home of guitarists Rush and Buddy Guy.  While each were distinctive guitarists, Sam's rich tremolo guitar playing was in a class by itself at that time.  Since there were already several artists performing under the "Good Rocking" name, Cobra label head Eli Toscano wanted to change Sam's name to something more traditional, like Sad Sam or Singing Sam.  Fortunately, Mack Thompson thought of "Magic" Sam, which suited Meghett liked that just fine.  His first single for Cobra was "All Your Love," which became a big local hit.  The song's unusual rhythm was revisited by the guitarist several times over the years with varying levels of success ("Easy Baby," "Everything's Gonna Be Alright"), but he also recorded a few other classics during his tenure with Cobra, including a pair of tracks with some intensely fiery guitar (the almost rockabilly "21 Days In Jail" and "Love Me With A Feeling,").

Sam's tenure with Cobra was interrupted by another Sam.....Uncle Sam, who drafted Magic Sam into the army.  Unfortunately, he and the army weren't a good match, and Sam ended up serving six months in jail for going AWOL.  When Cobra went under (soon after owner and notorious gambler Toscano's body was fished out of Lake Michigan), Sam headed over to Mel London's Chief Records in 1960.  While his Chief sides weren't quite as compelling as his earlier work with Cobra, he did make a few noteworthy recordings, such as a remake of Fats Domino's "Every Night About This Time."  The flip side was "Do The Camel Walk," an instrumental that was popular in Chicago clubs at the time and was later recorded much more successfully by fellow West Sider Freddy King as "Hideaway."  Over the years, the song has been linked to King, but sources say that it was actually developed by Hound Dog Taylor a few years earlier. 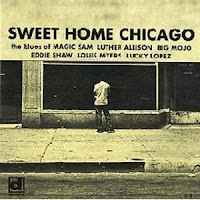 Chief folded up after a couple of years and Sam recorded sporadically for the next few years, until he hooked up with Delmark Records as part of their 1966 anthology release, Sweet Home Chicago

, a small, but potent collection featuring tracks by Sam, Luther Allison, and Louis Myers.  Sam's tracks (which featured Eddie Shaw on saxophone) included the somber "That's Why I'm Crying," and were a sign of things to come with both Magic Sam and Delmark.  Sam's guitar work was as powerful as ever, and he had really come into his own as a singer, with just the right blend of blues and soul in his delivery. 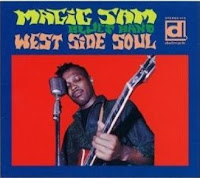 It was at Delmark where Magic Sam released two of the finest blues albums of the 60's and quite possibly, of all time.  West Side Soul

was given the only five-star review ever awarded to a blues album in the jazz magazine, Down Beat, and was called "a perfect album" by author Peter Guralnick.  In the late 80's, Living Blues published a list of their Top Ten Desert Island Discs and included West Side Soul

on the list.  Highlights of the disc included the upbeat opener, "That's All I Need,"  "Feelin' Good" (a nod to  John Lee Hooker's "Boogie Chillun"), the B.B. King-influenced "I Don't Want No Woman," and the ultimate cover of the ultimate cover tune, "Sweet Home Chicago" (freely adapted by the Blues Brothers in their movie....listen for the boys' shoutout to Sam just before playing it).  Throughout, Magic Sam sounds like the connector between B.B. King's sophistication and Buddy Guy's edginess on guitar and his vocals are incredible. 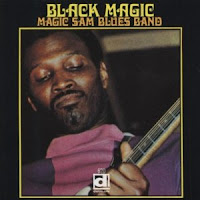 .  To some blues fans, this disc was even better than its predecessor.  For this release, Sam added the saxophone of Eddie Shaw, and Shaw's punchy sax fills lifted songs like "I Just Want A Little Bit" and "You Belong To Me."  Black Magic boasted an even more powerful set of songs, such as "What Have I Done Wrong," "I Have The Same Old Blues," and a remake of "Easy Baby."  To me, Black Magic

is even better than West Side Soul

, as Sam seems to have perfected that winning mix of urban blues and soul music. 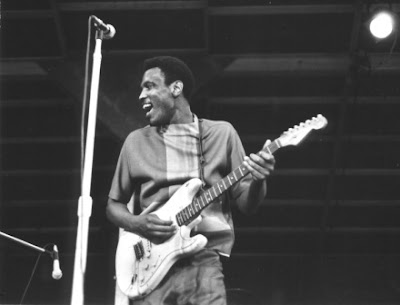 Magic Sam seemed poised for bigger and better things.  Based on his two successful Delmark releases, he was a hot topic for music magazines.  Reportedly, a deal with Stax Records was in the works.  However, years of constant touring, excessive drinking and neglect had taken a toll on Sam's body.  After a triumphant appearance at the 1969 Ann Arbor Blues Festival, he suffered a cardiac episode in the summer of 1969 and was ordered to take it easy for a few months.  However, he was in high demand, so he ended up in Europe for the American Folk Blues Festival, then returned to play some dates in California.  Upon returning to Chicago, he died on the morning of December 1, 1969, from a heart attack.  He had complained of heartburn when he first woke up and collapsed as he went to his room to lie down.  He was only 32 years old.  Black Magic

had just been released a few days earlier.
Though Magic Sam died young, he influenced countless blues musicians that followed, such as his old schoolmate, Magic Slim, Robert Cray, Bobby Radcliff, Jimmy Dawkins, Larry McCray, and dozens of others.  We're left to speculate just where Sam would have gone with his music from this point....would he have stayed true to the blues, or moved more toward mainstream soul, or taken his music in a completely different direction.  We'll never know for sure what direction he would have followed, but it would have been an exciting journey for sure. 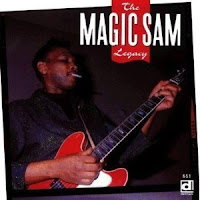 Every blues fan should own West Side Soul

, but there are some other Magic Sam releases worth having, such as the collection of Cobra and Chief recordings

from the early 2000's.  There's also a decent set recorded in the early 60's between his Chief and Delmark tenures called The Late Great Magic Sam 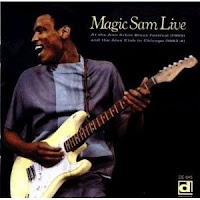 From all accounts, Magic Sam had to be heard live to really be appreciated.  There are three sets that capture Sam in live performance.  Delmark has released two of them, Live

and Rockin' Wild In Chicago

.  Both have inferior sound in some cases and can make for rough listening at times, but Sam's greatness is there to be heard.  The third set is the out-of-print Magic Touch

It seems like people during the sixties were searching for the cross-over band between blues and soul that was going to keep blues relevant to the younger audience. Judging from that last youtube track, Magic Sam had a bent for Rock n Roll just as much as soul.

I love that clip, especially the fact that he's using Hooker's guitar! A couple of folks I've talked to in the past that knew Magic Sam also thought that he would have eventually shifted over to the rock and roll side of things. He already had that bit of rockabilly in his system, based on some of his Cobra and Chief records, so it really makes sense when you think about it. Of course, Luther Allison also dabbled in that sound a bit, especially with his 70's recordings with Motown, but it would have been fascinating to see what Magic Sam would have come up with.

The first time I heard Luther Allison was on the Delmark 'Sweet Home Chicago'compilation. I loved the track 'Gotta Move On Up' with the Hawaiin steel guitar, which was a real soul fusion number. Based on that I purchased 'Night Life', which I wasn't a massive fan of. Do you have any recommendations for his recordings?

PS I really like the blog, it's become a weekly read that I look forward to.

Glad you're enjoying the blog and thanks for your comments.

I can remember first hearing "Gotta Move On Up," and falling in love with that steel guitar, which led me to want to find out more about Fred Roulette and to pick up some of his music. He has recently started recording again (over the past decade) and it's always fun to hear that guitar.

I enjoyed both of Allison's other Motown recordings. I've never heard anything from Night Life, though. Any of his recordings with Alligator are good and so is Serious, on Blind Pig.