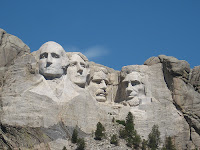 The presidential faces on the real Mount Rushmore were chosen because they all played important roles in American history.  Our first Mount Bluesmore will use the same approach.......four faces that played an important role in the development of the blues as it is today.  While you read about who I picked and why, take the time to figure out who your four faces would be on this particular version of Mount Bluesmore and why.  In the future, we will look at other versions of the monument, if you'd like.  It could end up being a fun topic with lots of discussion.

1)  Muddy Waters - I've stated several times that Waters is a definite member of Mount Bluesmore.  Simply put, without Muddy Waters, blues as we know it today would not exist.  Sure, the blues would still be there in one form or another, but for many listeners (past and present) Waters was the missing link between the blues of Delta and the blues of the City.  His raw and ragged sound helped pave the way for modern Chicago Blues.  There were others who played a role, but with his prominence as the "Main Man" at Chess Records, one of THE blues labels of the 50's, it's hard to ignore his influence then or now, both with listeners and with fellow musicians.  His band was a veritable farm team for future blues stars for over thirty years.  There's no doubt that Muddy Waters belongs on this Mount Bluesmore.

2)  Robert Johnson - Without Robert Johnson, you don't have the incredible blues resurgence of the 1960's.  Johnson is simply the most celebrated and revered blues artists ever.  His body of work is relatively small, but is, pound-for-pound (or song-for-song) the most potent group of blues songs ever assembled with phenomenal guitar work, hellhound-on-his-trail desperate vocals, and lyrics loaded with imagery and emotion, all of which have simply blown the minds of young artists like Muddy Waters, Jimmy Reed,  Lonnie Pitchford, Eric Clapton, Keith Richards, Robert Plant, Jimmy Page, and scores of others...... bluesmen and rockers..... for decades.  That, and the fact that a box set of his recordings, released over fifty years after his death, would sold over a million copies (the first ever blues recording to do so) serves as reason enough to include Johnson on my Mount Bluesmore. 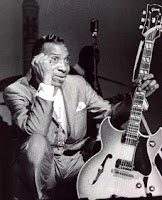 3)  T-Bone Walker - Electric blues guitarists everywhere owe an insurmountable debt to T-Bone Walker.  He revolutionized the instrument in the early 40's, singlehandedly transforming it into a lead instrument.  His guitar playing had an elegance never before heard, and everyone wanted to play like him.  Though he was a wonderful vocalist with a smooth, easy style, his guitar was what everyone wanted to hear and for close to twenty years, he enjoyed an impressive run, making essential recordings for Black & White, Imperial, and Atlantic.  Over seventy years, Walker's style has influenced just about every blues guitarists in the world, and will continue to do so for years to come.  This earns him a spot on my Mount Bluesmore. 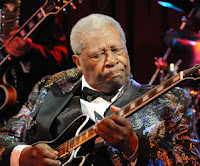 4)  B. B. King - Even music lovers who don't listen to the blues (are there such people?) know who B. B. King is.  He's one of the few blues musicians who was able to cross over and have success on the pop charts.  He's one of the first blues musicians to appear on regular mainstream TV variety shows, like the late night talkies and even American Bandstand.  He's appeared on TV series and movies over the years, and he still packs them in over 200 nights a year at the age of 86.  There's a reason for all of that.......King's guitar style, influenced himself by T-Bone Walker, has in turn influenced nearly every blues stringer (and quite a few rockers) plugging away out there today.  His vocals are every bit of a match for his guitar, and he's still a master showman after all these years.  He's the Face of the Blues today, so he HAS to be on Mount Bluesmore.

There you have it.....my Significant Figures of the Blues Mount Rushmore.  Now, of course, your versions could vary quite a bit from mine, and that's part of what makes the blues so special.  No two people come to the Blues from the same direction, but once here, we almost all end up headed in the same direction, listening to many of the same artists.

Friday Blues Fix would love to hear who your residents of Mount Bluesmore would be.
Posted by Graham at 12:01 AM

Good one. Got a "Mount Harpmore" post coming up in a few weeks!!