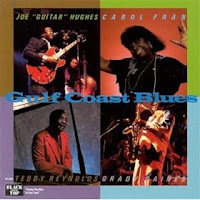 We all have albums that we bought years ago that still put a hop in our step today when we listen to them.  Over the years, as I hear more and more blues recordings, it seems like that happens less and less, but when I first started listening some twenty-five or so years ago, it was a fairly regular occurrence.  One of the first blues labels that I discovered and came to love was Black Top Records, out of New Orleans.  I picked up a couple of their recordings at JazzFest one year....I think one of them was Earl King's recording with Roomful of Blues (after seeing them on stage the same day) and the live Neville Brothers release that helped put them, and the label, on the map.  I had fallen in love with the New Orleans R&B that the Nevilles did so well, and as a result, picked up on several other Crescent City artists in the process.

I continued to buy up Black Top recordings as they were released, enjoying each and every one of them.  One cool thing that label owners Hammond and Naumann Scott started doing was to track down many of the artists from Louisiana and Texas that played on the great blues and soul recordings of the 50's and 60's for Duke and Peacock Records.  This really opened my eyes and ears to some great sounds because a lot of these artists, even though most of them hadn't recorded in over twenty years, still sounded great...because even though they hadn't been making records, most of them had never stopped performing.

We will look at Black Top Records in a future post.  Today, I want to focus on one of their recordings in particular.....one of my all-time favorites, Gulf Coast Blues, Volume 1.  This disc was released, with little fanfare, in 1990.  It featured two of the label's recording artists, Joe "Guitar" Hughes and sax man Grady Gaines, plus a couple of the label's supporting artists, taking center stage for the first time.....piano player Teddy Reynolds and guitarist Clarence Hollimon, along with his wife, R&B singer Carol Fran.

Fran and Hollimon have a cool story.  They first met and dated in the late 50's, when she was a singer for Excello Records with a hit record, "Emmitt Lee," to her credit.  Hollimon had previously played guitar for Big Mama Thornton, but was now backing Bobby "Blue" Bland on several of his recordings for Duke Records.  They eventually went their separate ways, Fran continuing to record for multiple labels and serving as vocalist (sometimes teaming with another future Black Top all-star....James "Thunderbird" Davis) in Guitar Slim's band, and Hollimon in demand as a session guitarist for Bland, Junior Parker, and others.  The pair reunited in 1982 and this time around, sparks flew and the couple were married and began performing together.

At the time of Gulf Coast Blues Volume 1, Hollimon had already appeared on several of Black Top's recordings, but Fran had been away from the studio for awhile, frustrated by lack of success and too many great recordings that never were released.  On this release, they shined on two tracks, a bouncy "Everyday Is Not The Same," where Fran sang lyrics in English and French, and this remake of "Emmitt Lee," featuring some of Hollimon's wonderful guitar.  Fran and Hollimon eventually made two recordings for Black Top, plus one more for JSP several years later, just before Hollimon passed away in 2000.  Fran has continued to perform and record, despite suffering a serious stroke. She recovered sufficiently enough to resume performing last year.


Joe "Guitar" Hughes had released an album for Black Top, called If You Want To See The Blues, in 1989.  Hughes got his start in Houston in the early 50's, teaming up with Johnny Copeland in the Dukes of Rhythm.  He later joined up with Bobby Bland's orchestra in the mid 60's and later with Al "TNT" Braggs.  Though not as well known as Copeland, or another comtemporary, Albert Collins, Hughes was a fine guitarist in the great Texas tradition and a more than capable singer.

Like Fran and Hollimon, Hughes got a pair of showcase tracks, the slow blues, "Apron Strings," and the funky "Miss Too Fine" (heard below), which contains the immortal line, "I hope you not bettin' on / What you sittin' on."  Hughes continued to record throughout the 90's, most notably a set from Bullseye Blues (Texas Guitar Slinger) before passing away in 2003.

Prior to Gulf Coast Blues, Gaines had released a stellar album for Black Top, called Full Gain, that featured Hollimon, Houston singer Joe Medwick, and Gaines' legendary brother, guitarist Roy Gaines.  Gaines' contribution on Gulf Coast Blues was a pair of roaring instrumentals that concluded Side One and opened Side Two (back when recordings had "Sides"), with Hughes and Anson Funderburgh trading guitar solos.  Gaines wasn't even supposed to be recording his own music for the album, but he talked his way onto it, which worked out great for us listeners.

T﻿﻿﻿﻿eddy Reynolds enjoyed the remainder of the disc all to himself, with four tracks.  Reynolds, like the rest, came up the hard way, appearing with Little Richard and the Upsetters, and later played with Bobby Bland, Albert Collins, Clarence Green, B. B. King, and Johnny Copeland.  He was also a regular session player for Duke and Peacock in the 50's and 60's, before leaving the business to work in construction.  He returned to performing in the mid 80's, appearing on both of Grady Gaines' Black Top recordings.

On  Gulf Coast Blues, Reynolds showed that he was quite a gifted songwriter, and a vocalist with chops that were at times similar to Lightnin' Hopkins.  He got the lion's share of tracks on the disc with four excellent sides mixing Texas blues and soul in equal parts.  He was best known during his later years for his commercials for Blue Bell Ice Cream in the 90's.  He passed away in 1998, after one last recording session with Texas Johnny Brown.


You might have noticed that the actual name of the subject album was Gulf Coast Blues Volume 1.  Don't bother searching for Volume 2, because it never happened, which was a shame.  I was dying to hear more of this great music back then, but thanks to Black Top, there's was still plenty to be heard for a few years to come.

Simply put, if you like southern blues and soul like they used to do it, you will love this CD.  It's out of print, but not too hard to find, and Amazon actually has it in mp3 format.  So what are you waiting for???!!!