In Case You Missed Him - Richard "Hacksaw" Harney

A while back, I was re-reading an interview of Robert Lockwood, Jr. in Living Blues magazine from 1995.  It was a most comprehensive interview, with Lockwood covering a lot of ground about his life from his beginnings to his sixty-plus years of playing and recording music.  Of course, he talked at length about Robert Johnson, who took up with Lockwood's mother for an extended period of time, returning time and time again to see her.  Lockwood said that Johnson "didn't chase no women; women chased him," but his mother didn't chase Johnson, which probably made her more intriguing to him.  Lockwood said Johnson would leave for a few months, but always came back and brought her money and he "treated her like a queen."

Lockwood also learned a lot of guitar from Johnson, who was notoriously secretive about his guitar playing, often turning his back when he played with other guitarists, which was rare.  Although Lockwood rarely played in Johnson's style for many years, preferring his brand of loose, swinging jazz-inflected blues, he learned a lot of the older man's music (mainly, he admitted, because Johnson was living in the house with his mother) and in the interview, he also cited who he felt were some of Johnson's biggest musical influences....Son House, Willie Brown, and "Hacksaw" Harney.

You can be forgiven if you've never heard of "Hacksaw Harney," but he was well-known in the Mississippi Delta of the 30's and 40's.  In the LB interview, Lockwood says...

"Really, I think that's where Robert (Johnson) got a lot of his ideas from.  I think that Hacksaw was a big influence with Robert.  He just played the guitar very well.  He played the guitar very, very well.  And what he was doin' was the same type of thing Robert does......I would have to say that Robert and Hacksaw probably played together, but I never heard it.  He was the only somebody who could compete with Robert."

I read this interview when it first came out, but I had forgotten about "Hacksaw" Harney, other than the name.  I didn't know anything else about him.  When I started revisiting Johnson's music at the end of last year, I began listening to Lockwood, House, Johnny Shines, Skip James, and others who either influenced or were influenced by Johnson.  I also began re-reading some old interviews that I'd not seen in many years and that was where "Hacksaw" Harney's name resurfaced and so I decided to dig a little bit deeper into this mysterious artist's background.

Richard Harney was born on July 16, 1902 in Money, MS.  His father, a church deacon, wanted his children to play secular music, but did not allow them to practice in the family home, which led Richard to begin playing on street corners in Greenville, accompanied by his brother Joe.  He also worked as a sharecropper, and eventually played bass with a jazz band in Cincinnati in the 20's.  He also worked as a repairman and a piano tuner.

His nickname's origin is a source of dispute, but blues piano master Pinetop Perkins said it came from his ability to manufacture replacement parts for pianos, using a hacksaw and whatever materials he could find for the fix.  It would naturally make sense, that he was an excellent piano player as well, but he was more highly regarded for his skills as a guitar player.

Harney returned to the Delta and formed a guitar duo with his brother Maylon.  They performed as Pet and Can, their family nicknames (Richard's nickname, Can, came from his love for candy as a kid), and recorded eight sides, two were released with singer/accordion player Walter "Pat" Rhodes and two with singer Pearl Dickson.

Sadly, Pet and Can's career was cut short after Maylon was murdered in a juke joint.  The loss of his brother seriously curtailed his musical career because he was extremely shy and also suffered from a speech impediment, which sometime led his audience to ridicule him when he tried to sing.  However, his guitar playing rendered them speechless most of the time and he made many a guitarist look like a novice.  In his autobiography, Honeyboy Edwards stated that Tommy McClennan got the song "Crosscut Saw" from Harney.

While Harney admired many of the traditional blues guitarists of his day, his own style was closer to the Piedmont style popular in Georgia and North and South Carolina......probably only Mississippi John Hurt comes close to Harney's playing style as far as Delta artists go.  He claimed that he tried to learn to play both guitar parts after his brother's death, No doubt this, along with his time as a jazz musician gave his guitar work a delicate intricacy that was unusual for the Delta musicians.  In turn, he influenced many of the Delta artists who heard him play, including Johnson.  Although he didn't record in Harney's style, it's quite possible that Johnson had incorporated some of Harney's style into his music in the couple of years before his untimely death. 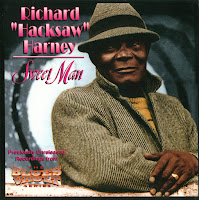 Due to his shyness and his speech impediment, Harney made a living as a piano tuner/repairer in Clarksdale and Jackson until he was rediscovered in 1969.  He was sought out by researchers in the 60's due to accolades paid to him by his contemporaries, including Big Joe Williams, which finally led Adelphi Records to attempt to track him down, traveling from Chicago to Jackson and back to Memphis, where Harney was finally located.  At the time of his rediscovery, Harney claimed to have not played the guitar, or even owned one, for twenty years.  Adelphi recorded Harney on a couple of field recordings in 1971 and he started playing workshops and festival.  He made his own album in February of 1972 (Sweet Man) and it's hard to believe that he had ever set his guitar down...his playing is marvelous throughout and he even sings a couple of songs.

In 1972, Harney suffered a minor stroke, but was still able to tour with Houston Stackhouse in 1972 and 1973.  Unfortunately, Harney also contracted stomach cancer and passed away on Christmas Day in 1973 at 71 years old.  He was buried in an unmarked grave at the Hinds County Paupers Cemetery near Raymond, MS.  Through a charitable donation, the non-profit organization Killer Blues designed a grave marker for Harney, which was placed in April, 2012. 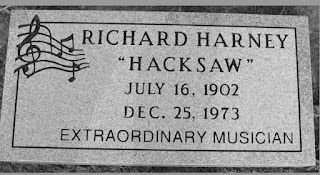 If you want to hear more, Harney's album is fairly easy to find online.  It's not your conventional Delta blues music, but it's very compelling music from a master guitarist.  It was most surprising the first time I heard him and I wish he'd been able to record and perform more.  If things had gone a little differently for him, his name would be mentioned with the other Delta blues legends.