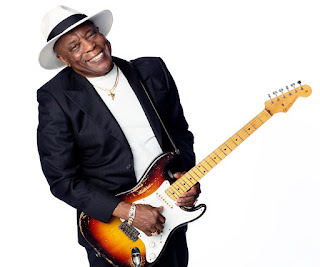 Friday Blues Fix is introducing a new topic this week called Three Essential Recordings.  This is not just for newcomers to the blues, but for longtime blues fans as well.  We will look at a particular artist and select, in our opinion, three albums that will serve as a fine introduction for new fans and lead longtime fans to go back and find one that they might have missed.  Next week, we will be discussing a recent blues-related journey that we undertook, but for now, let's get started with three essential recordings for Buddy Guy.
Most blues fans are familiar with Buddy Guy, who's served as a big influence for a lot of guitarists over the years.  In the early 80's, I was a huge fan of Eric Clapton and Stevie Ray Vaughan, both of whom covered Guy songs on their albums.  However, I didn't actually get to hear Buddy Guy until MCA started reissuing the Chess Records catalogs in the mid 80's, via their The Blues anthology series.  Eventually, I tracked down some of his recordings with Junior Wells and finally his own reissued recordings.  In the early 90's, after the resurgence of the blues genre, Guy began releasing new material and continues to do so.
All of Guy's recording have great moments.....he manages to still sound inspired as he approaches his mid 80's.  For these Three Essentials, we opted to capture his best moments at various periods of his career.  If you happen to feel differently from our choices, well, that's your choice and we invite you to share your Three Essentials in the Comments below.
Okay......for starters, these Essentials will be of Guy by himself, we will look at his work with Junior Wells down the road a piece.  These are three great options to really catch the work of Buddy Guy over the span of his career. 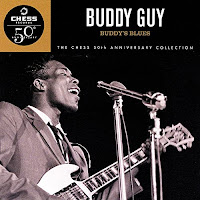 Buddy's Blues (Chess/MCA):  Guy enjoyed a lengthy tenure with Chess, both as a session guitarist and as a front man.  Buddy's Blues captures the cream of those recordings, a crisp and concise 15-song set of Guy at his absolute best.  Most fans will have heard these songs, either by Guy or by someone else.  This is what all the fuss was about for those up-and-coming rock and blues-rock guitarists who cite Guy as a major influence.  This is the place for newcomers because each song here (even the one where he's backing vocalist Lacy Gibson with some superb guitar work) is a keeper and the sound is wonderful. 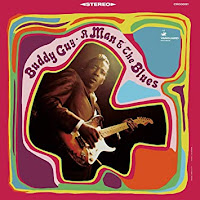 A Man and The Blues (Vanguard):  This recording was a couple of years after his Chess recordings (1968), but it captures Guy in a more relaxed and understaed mood, both as a singer and guitarist.  Backed by a tight, TIGHT band that includes the great Otis Spann on piano, Wayne Bennett on rhythm guitar, Fred Below on drums, and Jack Myers on bass, along with three saxophonists, Guy works through a great nine-song set that includes two of my favorite Guy slow burners, B.B. King's "Sweet Little Angel" and Mercy Dee Walton's "One Room Country Shack," and "Mary Had A Little Lamb.  I've had this album in various formats since 1987, the year I started listening to the blues, and I still play it regularly. 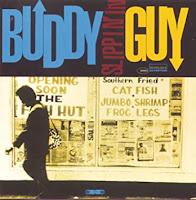 Slippin' In (Silvertone Records):  When Guy signed with ilvertone in the early 90's, I remember being excited because over time, I had managed to track down a lot of his earlier releases, solo and with Junior Wells, and I just knew he would make a big splash.
Well, he did, but his first couple of efforts were mixed bags to me.....I just don't enjoy the "guest star" format that a lot of labels do when they sign blues artists....I know I'm probably in the minority here for sure, but I feel like it ends up not really being the star's album.  Guy was such a force of nature that it didn't happen that frequently, but his albums ended up having more of a pop/rock feel than blues sometimes.  Slippin' In came out in '94, and I almost didn't buy it because I was disappointed in Guy's previous release (Feels Like Rain), but I'm glad I did because to these ears, it's his best effort start to finish of his 90's and beyond releases.  He does have a few guest stars (Double Trouble's Tommy Shannon and Chris Layton on some tracks and pianist Johnnie Johnson), but they are versed in the blues through and through and Guy really shines on this set.
There are a few runners-up.......I Was Walking Through The Woods, Stone Crazy, Sweet Tea, Live at the Checkerboard, and the Rhino collection The Very Best of Buddy Guy, but these three albums are the first ones I reach for when I want to hear Buddy Guy at his finest.  As stated above, your mileage may vary, so if they do, let us know in the Comments.
Posted by Graham at 12:01 AM