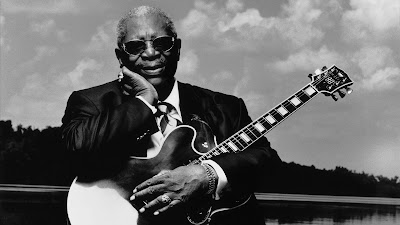 Most blues fans had probably heard, if not actually heard of, B.B. King even before they became blues fans.  He was the most accessible of blues men back in the 70's, regularly appearing on talk shows and TV series.  I heard him play several times on the Tonight Show over the years (when you could hear him over the Tonight Show Orchestra) and his appearance on my favorite show, Sanford and Son, was just wonderful.  I even watched a prison concert he did in the late 70's on Mississippi's Public Television channel.

Despite all that, it was a couple of years after I became a blues fan before I started picking up his albums.  I think part of the problem was that there were so many albums to choose from and I just didn't know where to start.  Part of it was that I was already familiar with him and there were these other great blues men and women that I was just discovering.

It's a pretty daunting task to select just three essential B.B. King recordings out of the hundreds of B.B. King albums on the market, but that's just what FBF is going to try and do today.  As with previous installments of Three Essentials, these are just my essential B.B. King recordings.  Your mileage may vary and I would love to hear what your three essentials might be......there are no wrong answers, so awaaay we go!! 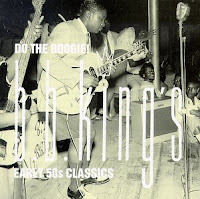 Do The Boogie!  B.B. King's Early 50's Classics (Virgin Records):  Everyone needs to hear King's early work for the sheer energy and exuberance that was on display for almost every track.  He never really lost that energy, but for these recordings, he was in mid-20's to mid 30's age range and it was particularly high.  He always tried his hand at different styles of blues and this disc has some familiar songs and some that are not-so-familiar, but they probably should have been.  It's hard to go wrong with any of King's recordings from this time period (a lot of his late 60's - late 80's albums were hit-and-miss at times), and this one is one of my favorites of the lot.....I actually bought the original version from the U.K. Ace label before Virgin reissued it in the early 90's.  The cover shot of King in his stylish shorts doesn't hurt a bit either.  If you can find either version, grab it! 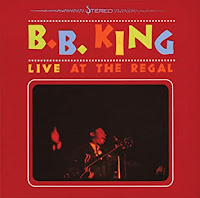 Live At The Regal (Geffen Records):  King released several excellent live albums (including Blues Is King, which we looked at a few months back), but Live At The Regal is considered not just the best live B.B. King album, but one of the best live BLUES albums of all time, and serves as a great introduction to not just King's music, but his skills as an entertainer.  He's rarely, if ever, sounded better as a singer or guitarist.  On song after song, most of which would be familiar to this 1964 audience of Chicago fans, he simply has the people hanging on his every word, eating out of his hand (they scream constantly throughout the songs, and he plays that enthusiasm for all it's worth).  Don't just buy one live B.B. King album, but definitely start with this one. 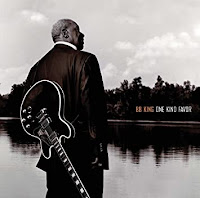 One Kind Favor (Geffen Records):  King's swan song in the studio is one of his best and most down-to-earth efforts in years.  A lot of his later recordings were sometimes marred by overly slick production, verging on pop production at times, or the presence of too many guest stars (some of these were better than others.....Blues Summit, for example).  One Kind Favor has a grittier production (courtesy of T-Bone Burnett) and it features a lot of songs that King never recorded before, including three from one of his heroes - Lonnie Johnson, and his vigorous read of Blind Lemon Jefferson's "See That My Grave Is Kept Clean" (from which the album's title is taken), which I couldn't help but hear in my head as I watched his funeral on Mississippi Public Television.  B.B. King saved one of his best albums for last.
It's really hard to pick just three great B.B. King albums, and that's not counting all of the multi-disc sets that are out there that cover the length and breadth of his career in one fell swoop!  By no means should you limit yourself to just three of his albums......you'll be selling yourself short if you do.
So what do you think?  Agree or disagree with these three choices.  We would love to hear from you and see what your choices would be for B.B. King's Three Essential Recordings!