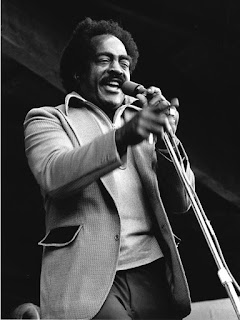 I always enjoyed visiting record stores and rarely did I have any particular item in mind to purchase when I visited.  It was always neat to stumble onto a release that you weren't expecting to find, or even better, find an album that you had no idea even existed by one of your favorite artists.  Since I've been listening to the blues for so long, it's pretty hard to find any surprise releases, but it is possible to find one that you weren't expecting to see.  During my visit to the Little Big Store in Raymond, MS last week, I found several unexpected gems, including this week's selection.

Jimmy Witherspoon was one of the greatest blues singers from the mid 40's until his death in 1997.  He had a smooth, warm, and mellow voice and was able to move effortlessly from blues to jazz.  He got his start recording with Jay McShann and had a hit in 1939 with "Ain't Nobody's Business."  He recorded with a number of labels in the 50's, including Chess.  I first heard him via his recordings for Chess.  His songs were a bit more refined and polished than the standard Chess fare, but effective nonetheless.

He ventured into the jazz world a bit in the late 50's/early 60's, recording with Ben Webster and Groove Holmes, among others, before taking a break from performing, working as a DJ, but continuing to record into the 70's, recording with Eric Burdon of the Animals before hitting the road again with a young Robben Ford as his guitarist.  Their collaborations steered Witherspoon into a blues-rock direction and he had some success.  In the 80's, Witherspoon battled throat cancer, but continued to perform and record, though his voice did suffer from the treatments and surgeries he endured until cancer took his life in 1997. 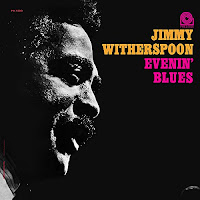 Over the years, I heard a lot of Witherspoon on a variety of blues collections.  He was always excellent, very classy and tasteful.  My favorite Witherspoon recording was Evenin' Blues, which was released on Prestige Records in 1964.  On that recording, the singer was joined by guitarist T-Bone Walker and saxophonist Clifford Scott.  I found that in a Shanachie Records catalog in the early 90's (mainly because I saw T-Bone Walker was on it.....at that time it was nearly impossible for me to find any of his recordings, just before the glut of reissues hit the stores).  I absolutely loved it.  It was a wonderful set of blues tunes, several familiar songs included, with great rapport between Witherspoon and the band.

A few days before I went to the Little Big Store, I had been searching for a copy of Evenin' Blues online, but hadn't committed to ordering a copy.  As I flipped through the CDs that day, it was on the last row of blues selections, so I snatched it up in a hurry.  You really get a taste of how versatile a singer Witherspoon was on this set, which is mixed with upbeat jumping blues ("Money's Gettin' Cheaper," "Good Rockin' Tonight"), smokey after-hours ballads (the title track),and vintage R&B ("Don't Let Go," which I first heard via Isaac Hayes' discofied version in the late 70's, and "Kansas City").

The CD adds a few alternate versions, which are as good as the originally released songs, so there's an added bonus to listening to this great music.  Jimmy Witherspoon was one of the best vocalists in a variety of settings and genres for a long time and Evenin' Blues may be his best straight blues recording, so if you happen upon it at your friendly used record store, snatch it up!