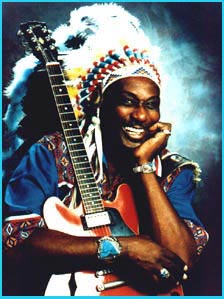 Late last week, the blues world lost one of its great characters when Eddy "The Chief" Clearwater died on Friday of heart failure at the age of 83.  He was still active on the scene......one of my friends saw him a couple of weeks ago during the Beale Street Festival, where he put on quite a show.  In fact, he was renowned for his live performances and his music, both of which combined the best qualities of the blues, 50's-era rock n' roll, a little bit of country as well as gospel.  He was also inclined to wearing Native American headdresses during his performances, which earned him his nickname.

I listened to Clearwater a lot over the years, beginning back in my early days as a blues fan, when I purchased his Flimdoozie album at Stackhouse Records in Clarksdale.  I had heard a lot about his album, The Chief, which, like Flimdoozie, was released on Rooster Blues Records, but was unavailable the day I traveled to the Delta.  Just as well, I played Flimdoozie quite a bit in the coming weeks.....Clearwater was joined by one of my favorites, Otis Rush, on a couple of tracks and harmonica master Sugar Blue as well.  Later on, I finally got to hear The Chief and I understood what the fuss was all about.  My favorite Clearwater song is on The Chief, "I Wouldn't Lay My Guitar Down."

Over the years, I've heard much more from The Chief......I really liked his Chuck Berry approach to the blues.  It helped him to stand out from the pack, but he was equally adept at the straight ahead West Side blues, too.  I found the Delmark album, Chicago Ain't Nothin' but a Blues Band, which collected several recordings from Clearwater's uncle, Reverend Houston H. Harrington's small 50's label, Atomic-H, including a pair of Eddy Clearwater first tracks, as Clear Waters.


Clearwater was born Eddy Harrington in Macon, MS in 1935, but he was Clear Waters as a takeoff on Muddy Waters.  After recording in the early 60's for Federal Records, he was known as Eddy Clearwater and that name stuck as he recorded singles for Federal, USA Records, and other labels during the 60's all the way through those great recordings for Rooster Blues in the 80's.


In the 90's, Clearwater recorded albums for several labels......his own Cleartone Records, Blind Pig Records, and an extended run with Rounder's Bullseye Blues subsidiary, including an interesting album with the surf rock band Los Straitjackets.  His last disc came from Alligator Records in 2008, West Side Strut, but he continued performing, appearing at the aforementioned Beale Street Festival in early May and at Buddy Guy's Legends a couple of weeks before he passed away on June 1st.

Eddy Clearwater was one of the most consistent and durable blues artists on the scene for a long time.  For over 60 years, The Chief packed quite a punch.  Please remember his family in your prayers and be sure to check out some of his most impressive catalog.