As we observed around this time last year, the first couple of weeks in January of each year are a sort of transition period between the maddening rush of Christmas and the arrival of the first of the new year's album releases.  While Friday Blues Fix has already heard some pretty good forthcoming releases (which we'll be discussing in the coming weeks), we usually use the first couple of weeks of the year to relax, recharge our batteries, and rediscover a few "old friends" from the record collection.  This week, FBF will revisit a few classics from the CD shelf that might have slipped through the cracks after their initial release.  As usual, most of these discs are still available in stores (online and brick & mortar, etc....). 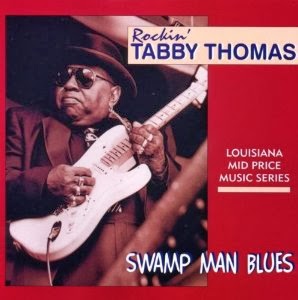 Rockin' Tabby Thomas - Swamp Man Blues (AIM Records):  Tabby Thomas passed away on New Year's Day.  In Baton Rouge, he was a legendary performer (his 1961 hit, "Hoodoo Party," is a Swamp Blues anthem) and was the owner of Tabby's Blues Box, the club that almost single-handed kept the blues alive in the city.  If there was ever an album more appropriately titled, I haven't seen it.  This set was recorded in the mid 1990's and issued on AIM Records in 1999.  There's no musician information listed in the liner notes, but whoever was backing Thomas knew exactly what they were doing.  This is one of the most representative albums of Louisiana music that you will hear.  There's raw blues, gritty funk, greasy soul, and irresistible island rhythms thrown all together.  You can almost feel the humidity and see the Spanish moss hanging from the trees.  It's a shame that this great blues man didn't record more than he did, but his legacy can be seen and heard from the likes of Larry Garner, Kenny Neal, Troy Turner, and Thomas' son, Chris Thomas King.  If you're into the Swamp Blues sounds of Louisiana, this is a really good disc that blends the old school sounds with a nice modern feel. 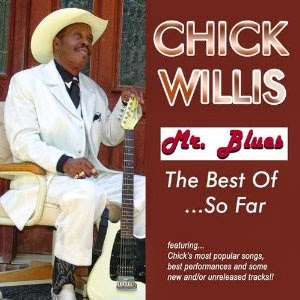 Chick Willis - Mr. Blues:  The Best of...So Far (Benevolent Blues):  Willis passed away on December 8th, after a battle with cancer.  I got to see him many years ago at the Chunky Rhythm & Blues Festival not far from where I lived and it was quite an entertaining performance.  In the early 70's, he released the now-classic "Stoop Down Baby Let Your Daddy See," a tune that has been covered by blues bands of all sizes, shapes, and colors since then (including several re-do's by Mr. Willis himself).  From the late 80's until his death, Willis was very prolific, releasing albums for several different labels...Ichiban, Deep South, Rock House, and Benevolent Blues, who released a "Greatest Hits" collection in 2010 that is the best summary, so far (like the title says), of his catalog.  It includes a rare studio version of his signature song, along with some other risque' tunes in the same tradition ("Jack You Up," "Bootie Call," "Old Man With Freaky Ideas") a few live tracks that capture his essence pretty well, and some more traditional blues that show that he was not a one-trick pony.....the title Mr. Blues summed him up pretty well.  He was a great singer and as a guitarist, he was influenced by Guitar Slim, so that should let you know something about his playing style.  I spoke to him via Facebook a few times after he was diagnosed and he was always very cordial and determined to beat the sickness that plagued him the last couple of years of his life.  This is a great introduction to his music, but you probably don't need to plug it in at your kid's birthday party.


Chuck Berry - Blues (Chess/MCA):  When I picked up this collection on Ebay several years ago, I was blown away.  While Berry was obviously influenced by blues artists like Muddy Waters, his sound and his songs were more upbeat and basically served as a blueprint for Rock & Roll.  However, while he was with Chess, he also laid down some pretty awesome blues tracks as might be expected, given the line-up of musicians backing him (Hubert Sumlin, Johnnie Johnson, Willie Dixon, Matt "Guitar" Murphy, Fred Below, Odie Payne).  Berry's version of "Wee Wee Hours," with some incredible piano runs by Johnson, is one of my all-time favorite tracks (incidentally, this track was the "B" side of the single that put Berry on the map, "Maybelline".....not a bad purchase way back in 1955).  Even though he is playing the blues, he still has that unique sound in place on these tracks.  Blues indicates that had Chuck Berry stuck strictly to the blues, he would have done just fine. 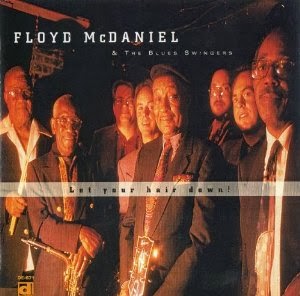 Floyd McDaniel & the Blues Swingers - Let Your Hair Down (Delmark):  McDaniel moved to Chicago from Alabama when he was 15 and began to sing and play the blues.  In the 40's, he learned to play electric guitar and joined what would become the Five Blazes, who recorded for Chess subsidiary Aristocrat in the late 40's.  Over the years, McDaniel alternated between playing music (including a stint with the Ink Spots) and operating his own tavern, but he eventually got to record with his band, the Blues Swingers, for Delmark in 1994, when he was 78 years old.  Let Your Hair Down shows McDaniel easily moving between 40's and 50's-era jazz and classic urban blues with his smooth vocals and rich guitar sound on a varied set of covers, both familiar and obscure.  The Blues Swingers, an eight-piece with a tight rhythm section and four horns, are wonderful in support.  McDaniel passed away the next year just after his 80th birthday, but this is a fine testament to his talents. 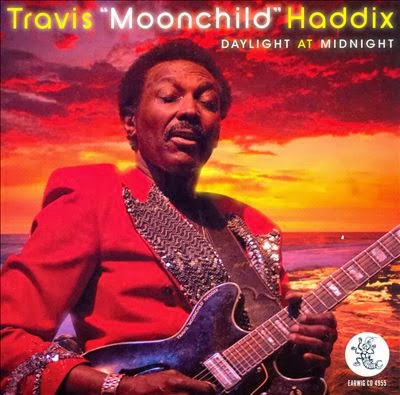 Travis "Moonchild" Haddix - Daylight at Midnight (Earwig):  Like Chick Willis, Travis Haddix has been very prolific over the past quarter century, recording for several now defunct labels, including his own Wann-Sonn label.  Born in north Mississippi in the late 30's, Haddix was inspired by the music he heard on Memphis' WDIA radio station, most notably B.B. King.  Settling in Cleveland, OH in the late 50's, Haddix made a name for himself playing in juke joints and at various festivals with his King-influenced guitar, his gravelly vocals, and his original songwriting, finally getting to record in the late 80's.  Haddix recorded Daylight at Midnight in 2008 and it's a textbook example of his sound.  It's hard to believe that he's not better known than he is, given the high quality of everything that he's recorded and released since 1988.  If you check out this release, I guarantee you will want to hear more.