Yes, I know we've already had a Summer post or two featuring some brand new blues releases, but there are just too many new releases out there that deserve to be mentioned.  2013 has been a pretty outstanding year for blues fans.  Below are five new and upcoming releases for you to consider spending your hard-earned dollars on.  As always, extended reviews of these discs will be found in upcoming issues of Blues Bytes, so stop by and check that site out when you have a chance. 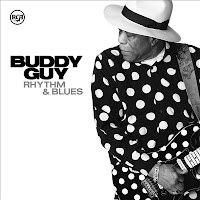 Buddy Guy - Rhythm & Blues (RCA):  This double disc set comes out on July 30, Guy's 77th birthday.  You would never know that he was anywhere near that birthday based on the music on this release.  Guy works that polka dot guitar over on these tracks, which are divided into a "Rhythm" disc and a "Blues" disc.  To be honest, there's not much difference in either disc, far as the music goes, but that makes sense and I think that may be the point that Guy is trying to make here.

Tom Hambridge returns as producer and also plays drums and co-wrote most of the tunes, some with Guy.  Hambridge seems to have a really good grasp of what Guy is looking for in a recording, both as a producer and as a songwriter because Guy is really inspired both on guitar and vocals.  Hopefully, this relationship will continue to be a fruitful one for both. 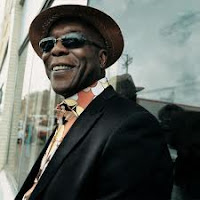 There are also the requisite group of guest stars (Kid Rock, Beth Hart, Keith Urban, Gary Clark, Jr., and Aerosmith dudes Steven Tyler, Joe Perry and Brad Whitford) on five of the 21 tracks, but they all adjust to Guy's style and not the other way around, as is sometimes the case with guest stars on blues albums, so it works pretty well.  The covers pay tribute to Guy's fellow Blues Brother, Junior Wells ("Messin' With The Kid," which teams Guy and Kid Rock) and his idol Guitar Slim ("Well I Done Got Over It"), plus a remake of a classic that Guy covered during his Vanguard days ("Poison Ivy").

I have to admit that I basically stopped listening to Guy's new recordings for several years...too many guest stars, too much of the Hendrixian wall o'sound pyrotechnics, not enough blues.....but since Hambridge came on board, it seems that Guy has been rejuvenated and has a little extra hop in his step.  Although I would have liked for there to be a little more grit in the production, that's a minor quibble and shouldn't keep anybody who loves the blues from hearing this set.  Rhythm & Blues shows that Buddy Guy is still pretty amazing, even at age 77. 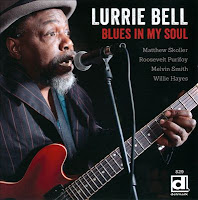 Lurrie Bell - Blues In My Soul (Delmark):  If you're a fan of Chicago blues played the way they used to do in the 50's and 60's, you will absolutely love this disc.  Bell rips through a set of vintage blues tracks from artists like Jimmy Rogers, T-Bone Walker, Little Walter, Junior Wells, Otis Spann, and Big Bill Broonzy.  While most of these will be familiar to blues fans, they haven't been done to death, and Bell puts his own personal spin on them with his fiery guitar work and his soulful vocals.  He also contributes several of his own compositions that blend really well with the classic covers.

Friday Blues Fix friend Dick Shurman produced the disc and he really captures the atmosphere of the classic Chicago sound.  Bell's working band (keyboard master Roosevelt Purifoy, drummer Willie Hayes, bass player Melvin Smith, and harmonica ace Matthew Skoller) provides stellar backing, along with horns from Mark Hiebert (sax) and Marques Carroll (trumpet).  Bell is one of the nice stories on the blues scene these days.  After a great start as a teenage guitar prodigy, he has overcome several personal tragedies over the past couple of decades and is emerging as one of the mainstays of the Chicago scene.  You will be hearing more about Lurrie Bell next week, right here at FBF.

David Egan - David Egan (Rhonda Sue Records):  You may not know David Egan, but you probably know at least one of his songs.  He's penned tunes for John Mayall ("Wake Up Call"), Percy Sledge ("First You Cry"), Marcia Ball ("Sing It"), and Johnny Adams (one of my all-time favorite Tan Canary tracks, "Even Now").  He was part of the Cajun band File' during the 90's and is currently in the Swamp Pop group, Lil' Band of Gold.  He's also released several solo albums over the past few years that have received critical acclaim.  His latest, self-titled release is his best yet.....just bursting from the seams with that great Louisiana vibe.

Egan plays keyboards and sings in this wonderful, vulnerable style that just screams deep blues and soul.  To me, each song is a mini-masterpiece, each with their own charms and high points.  Songs like "That's A Big Ol' Hurt," "Outta Mississippi," "Blues How They Linger," "Root Beer Baby," "Call Your Children Home" (with guest guitarist Lil' Buck Senegal), and "Sad, Sad Satisfaction deserve to be heard by a huge audience.  I don't usually start compiling a Top Ten list this early, but this one should easily be on there.  If you like blues and soul singing and songwriting at it's best, you owe it to yourself to find this one.  For a great sample, and one of my favorite songs on the disc ("That's A Big Ol' Hurt"), go here and give David Egan a listen.  You can thank me later. 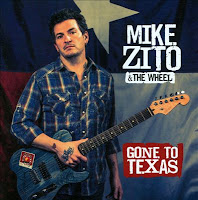 Mike Zito & the Wheel - Gone To Texas (Ruf):  Singer/guitarist Zito is a member of last year's big blues "supergroup," Royal Southern Gentlemen, but he's also released several top notch albums of his own.  Gone To Texas, so named because Zito moved there several years ago to straighten his life out, is a raw and ragged foray into Texas blues and roots music (with some Louisiana thrown in for good measure) that features guest appearances from slide guitar wizard Sonny Landreth and Texas roadhouse legend Delbert McClinton.

Though both make nice contributions, Zito is very much his own man, moving through a wide range of styles ranging from blues (blues rock and acoustic) to crunching hard rock to soul  to funk.  Some of the material is autobiographical, like on most of Zito's other albums.  That said, it's obvious that Zito has a strong affinity for the music and culture of the Lone Star State (his wife is from Texas and he was able to overcome his addictions while living there) and it really comes out on this disc, which is a standout from start to finish. 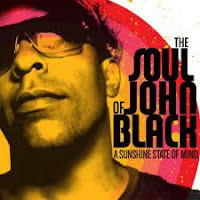 The Soul of John Black - A Sunshine State of Mind (Yellow Dog Records):  If you're looking for the perfect Summer soundtrack, it's closer than you might think, and all on one disc.  The Soul of John Black is the brainchild of John "JB" Bigham, and his musical vision can best be described as "soul-roots."  It mixes the blues, soul, R&B, and funk.  If you grew up during the 70's, you're familiar with this style of music and you probably wonder why it ever went away.  These tunes all have a lighthearted, carefree vibe to them that should put a smile on your face.

The songs range from mellow soul in an Al Green vein ("Summertime Thang"), inspirational ("Higher Power"), funk ("East L.A. Lady"), and blues ("Johnny Bear (Give It To Me))," a tribute to the suggestive lyrics of the early bluesmen).  Bigham is a Chicago native who takes the music he grew up with and blends it with the music he's played over the years with other artists like Miles Davis, Fishbone, Dr. Dre', and Eminem.  While A Sunshine State of Mind has a definite Summer feel, you will probably find yourself listening to it all year.