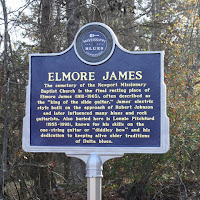 My brother and I share a birthday, so we usually plan some sort of outing to celebrate.  In recent years, he started making cigar box guitars (his site is listed on the right sidebar if you want to check it out) and sort of gravitated toward the blues in the process.  Over the past few years, we made a few one-day "Blues Pilgrimages" around the state.....one year we drove to Indianola to the B.B. King Museum, another year we went to Clarksdale to check out the Delta Blues Museum, Roger Stolle's Cat Head, and the Rock & Blues Museum.  Last year, we drove to the southwestern part of the state to check out a few Blues Trail markers previously unseen.
This year posed a challenge because due to the virus, most businesses are closed.  We had tried a couple of weeks to go to West Point to visit the Howlin' Wolf museum, but the curator was going to be out of town the first weekend and by the time the second weekend rolled around, most of the businesses in town had shut down again.  We quickly came up with a back-up plan that didn't involve much mingling and little contact with the general public.

For starters, we visited my new favorite store, The Little Big Store in Raymond.  It had been several years since my brother had visited and their inventory had increased considerably.  We picked up a few used CDs and just took in the atmosphere.  One of my favorite things when I used to visit record stores was to check out the LPs to look at the artwork and enjoy the creativity involved in designing them.  Since all of these albums are used, you can now open them up and see all of the artwork and liner notes.  I had forgotten how much I used to enjoy doing that.

I picked up several CDs, a couple of which were blues.  Over the past few months, I've been listening to a lot of classic blues artists......Furry Lewis, Howlin' Wolf, Blind Willie McTell, Floyd Jones, Robert Nighthawk.....and Johnny Shines.  Actually, Shines was one of the first blues artists I heard.  one night in the mid 80's, I was changing channels on the TV and ran across a video of an old blues festival in Mississippi (I think it was took place in the mid/late 70's based on the fashions worn by the audience) on public television.  The artist playing when I ran across the show was Johnny Shines and his intense vocals caught my attention, as well as his equally intense, absolutely stunning slide guitar. 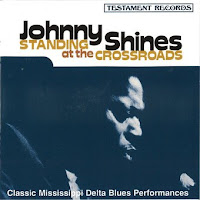 Later, when I was trying to build up a blues collection, I was really not able to find a lot of Shines' recordings, other than his appearance on Volume 3 of Chicago!  The Blues!  Today!  Shines' performance there was memorable, but I was unable to find any more of his work and eventually he slipped down the old memory hole.  The Little Big Store had several Johnny Shines collections available, so I picked up two of them last week......the solo acoustic Standing At The Crossroads, a phenomenal set which included several songs associated with his former traveling partner Robert Johnson.  This set finds Shines at the top of his game playing the country blues he grew up playing in the 30's and 40's with and without Johnson.  I'm not sure how I went so long without owning or at least hearing this album......just amazing stuff. 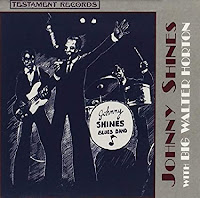 That being said, the second Shines CD I purchased nearly blew my socks off.  Johnny Shines With Big Walter Horton teams two of the greatest blues artists of the previous quarter century.....Shines and harmonica master Horton (who is simply one of the finest harp players ever....there is no way that this can be argued).  It's a compilation of two electric sessions between Shines and Horton that is some of the best, rawest Chicago blues you'll ever hear.  It shows that Shines was as powerful a plugged-in blues man as he was unplugged, and it certainly didn't hurt a bit that on one of the sessions, he was backed by a young guitarist names Luther Allison.....it's a shame these two didn't collaborate more often.  This is one of those sessions that I'm sure required little work by the folks in the recording booth......they just sat back and let magic happen.  I strongly recommend both of these sets to anyone who digs vintage blues.

After leaving the store, we stopped and ate lunch at a restaurant in Ridgeland, MS called Burgers & Blues, where we enjoyed great food, but not much blues other than the decor.....the music was of the 80's pop variety.  From there, we drove north for about an hour to Ebenezer, MS, following the map on the Mississippi Blues Trail app to the Newport Missionary Baptist Church to visit the grave sites of Elmore James and Lonnie Pitchford. 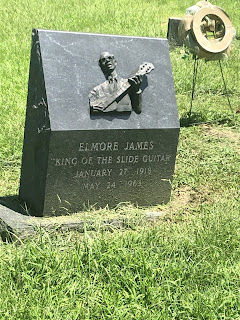 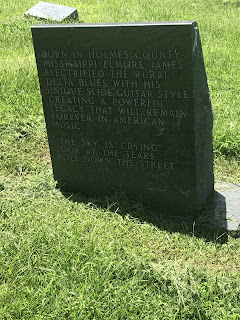 As seen on his marker, James is called "King of the Slide Guitar."  More than likely if you're visiting this blog, you're familiar with Elmore James' music.  If not, you need to be.  He's best known for "Dust My Broom," an old tune associated with Robert Johnson, but his entire body of work is amazing.  For the uninitiated, check out the Rhino set, The Sky Is Crying:  The History of Elmore James (an overview of his whole career), then dig deeper with Let's Cut It:  The Very Best of Elmore James (which collects his recordings for Meteor, Flair, and Modern Records).  He was as powerful a singer as he was a guitarist and there are three markers in this part of the state associated with him and his music (the other two are just south in Canton, MS). 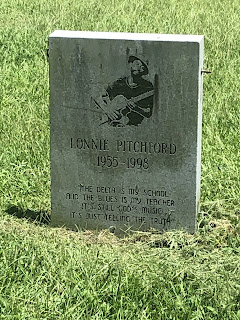 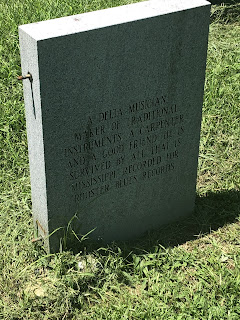 Lonnie Pitchford became known in the 80's and 90's for his inspired versions of Robert Johnson songs played on his one-stringed diddley bow.  He learned the Johnson tunes after meeting Robert Lockwood Jr., who taught him some of the songs.  He later played with Lockwood and Shines.  Though he also played six-string guitar and piano (both of these talents are on display on his only album, All Around Man, on Rooster Blues Records.  He mostly played in Mississippi and sometimes in Memphis, but also worked as a carpenter (I remember seeing this in an interview for Mississippi Public Television).  He made a memorable appearance in the early 90's movie Deep Blues, and the accompanying soundtrack.  Sadly, he passed away in 1998, only 43 years old.  His headstone also has a place on the right side where a guitar string was originally attached, but it was not there the day we visited.

I'm sure you've all noticed the common factor (Robert Johnson) in all three of these artists.  Shines traveled and played with Johnson, and James was also active around the same time and influenced by him (one wonders if his version of "Dust My Broom" wasn't so far removed from how Johnson would have played it during the same era).  Pitchford was heavily influenced by Johnson's music as well.  Of course, Robert Johnson is a common factor in a lot of blues artists, past and present.....just more so with these three than a lot of others. 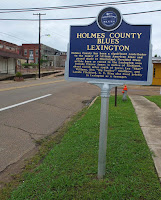 We also drove through Lexington, a few miles to the north, where we saw another blues marker.  Lexington was the home of B.B. King for a few years, living there for two years with his father after his mother and grandmother passed away.  It was also the home of the blues version of the Smothers Brothers......Otis "Big Smokey" Smothers and Abe "Little Smokey" Smothers, as well as Lee "Shot" Williams, who was a cousin of the Smothers.  We didn't make to the other Holmes County marker in Tchula, but that's another trip for another day.  While this trip wasn't the "Blues Pilgrimage" my brother and I originally planned, I think it was a very good one.  I'm already looking forward to next year's trip.