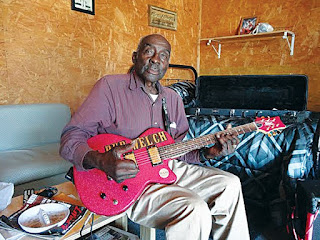 I've been reading and hearing about Leo 'Bud" Welch for a couple of years, but I only got on board a few weeks ago.  On paper, he seemed like someone I wanted to hear, an older Mississippi hill country guitarist who seemingly showed up out of the blue and was blowing away fans and critics alike with his release, Sabougla Voices.  I wasn't sure because sometimes I pick music up that critics rave about (usually in other genres, but sometimes in  blues) and I don't apparently get the same vibe that they do......not all the time, but occasionally.  After Welch's most recent album, I Don't Prefer No Blues, was released earlier this year, I decided to check him out, ordering both of his disc on Amazon.

Welch has an interesting every-man backstory of sorts.  Born in Sabougla, MS, which is about 20 or so miles east of Grenada and about 12 miles west of Calhoun City, he picked up a guitar for the first time when he was 12.  It was his older cousin's guitar and considered "off limits," but Welch and a younger cousin would "borrow" it while he was gone to work, at least until he caught them playing it one time.  When he heard Welch play it, he was impressed enough that he allowed him to continue to play it.

He also learned to play harmonica and fiddle and soon was playing local picnics, parties, and juke joints and clubs.  His brand of blues mixed with gospel and was raw and ragged and had a primal urgency.  He was once offered an audition by B.B. King, but he couldn't afford the trip to Memphis.  Instead, he worked during the day on a logging crew for over thirty years and played his music on the side at night and on weekends.

In the mid-70's, with the popularity of the blues on the decline and gig hard to find, Welch switched to the blues, playing in the same style, but with different lyrics and themes.   He played with the Sabougla Voices group and also with the Skuna Valley Male Chorus.  Unlike many blues artists, Welch never considered the blues to be "the devil's music," thinking that the blues merely reflected the daily up's and down's of people's lives......just songs about the everyday trials and tribulations of regular folks. 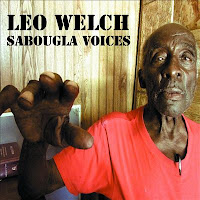 Welch soon attracted the attention of the folks at Fat Possum Records' Big Legal Mess subsidiary, who released Sabougla Voices in early 2014.  From all accounts, it basically Welch's church set, backed by a band that includes guitarist Jimbo Mathus and a pair of back-up singers dubbed the Sabougla Voices.  This is an amazing, ragged, but righteous set of gospel tunes with blues overtones and is probably unlike anything you've ever heard....it completely blurs the line between the blues and gospel.  The joy and exuberance just erupts from every note Welch plays and sings, and his performance belies the fact that he was 81 years old at the time of recording.


Due to Sabougla Voices' success, Welch was able to tour the world, playing festivals and clubs around the globe.  As part of his deal with Big Legal Mess, Welch promised that if the label issued his gospel record, he would record a blues album for them.  As good as his debut was, Welch's second release, I Don't Prefer No Blues (I read somewhere that this was a quote from his minister regarding the new album) is just an incredible set that gets the blues down to its basic core. 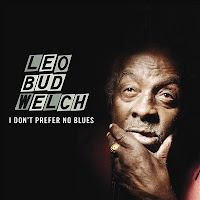 Mathus returns on guitar and Sharde' Thomas joins Welch on vocals for the mournful opening track, which sort of bridges the first album and the second.  From that point forward, the album is pure down-home blues with the rawest, most raucous guitar work, grinding rhythms, and Welch's craggly, weathered vocals just demolishing everything that's in the way.  You've probably heard some of these songs before, like on the first album, but you've never heard them presented in this manner.  The best way to hear this one is to turn the volume up as high as it will go.


Now 83 years old, Welch, a resident of Bruce, MS,  is still going strong with no signs of letting up.  He hits all of the Mississippi blues festivals (he was at Bentonia last month), and just finished a European tour.  He will be appearing at the annual Sunflower River Blues and Gospel Festival (no doubt playing both styles) on August 6th in Clarksdale, and will then be heading back to the UK.  For Leo "Bud" Welch, not to mention blues fans all over, "Better Late Than Never" was never a more appropriate phrase.


Blues fans absolutely need BOTH of these albums in their collection......no if's, and's, or but's about it.  There's also a Kickstarter drive working to film a documentary of Welch's life and you can go here to check it out and make a donation.