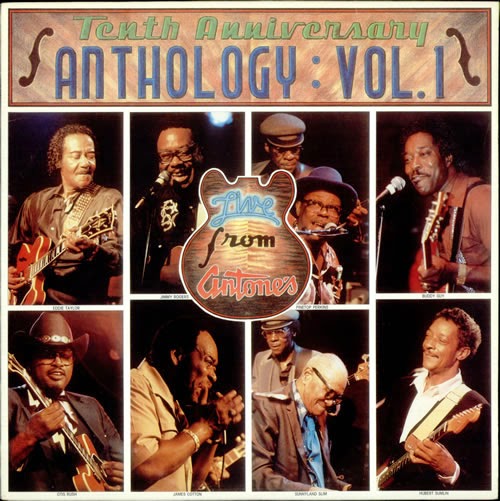 I've rambled on incessantly over the past few years about my early days as a blues fan.  I wouldn't probably do so, but I figure that most people who read this blog have similar stories to mine and can relate to what I'm talking about.....starting out listening to some great music....maybe by accident......from a favorite artist, then backtracking to see where the music originated and finding out that you like the original version as much or more than what led you to it.

As I've said before several times, one of the best things that I did was send off for a mail-order catalog to Roundup Records in Cambridge, MA.  I was expecting a little 6 to 8-page, fold-up catalog with the piece of circular tape holding the pages together.  Instead, I got one of those cardboard envelopes containing a big 100-page catalog with a supplemental catalog and additional sheets included, plus a copy of their monthly catalog, which gave detailed reviews of new and old albums of various genres.....not just blues, but also jazz, roots, country, rock & roll, and gospel.  For a new fan with tons of questions about his newest musical interests, Roundup Records was a major find, and I took advantage of it quickly and repeatedly, ordering lots of old and new music over an extended period.

One of the recordings that I ordered, almost as an afterthought, turned out to be one of my all-time favorites.  It came from the Austin-based Antone's Records and Tapes label.  Antone's was owned by Clifford Antone, who also owned the famous blues club of the same name, which was one of the first music clubs on Austin's 6th Street, played a huge role in the beginnings of the city's now-burgeoning music scene.  When the club opened in 1975, it became a second home to numerous blues legends like Muddy Waters, John Lee Hooker, James Cotton, Hubert Sumlin, Sunnyland Slim, Jimmy Rogers, Luther Tucker, Snooky Pryor, Matt "Guitar" Murphy, Buddy Guy, Pinetop Perkins, Albert Collins, Eddie Taylor, Stevie Ray and Jimmie Vaughan, and many many others.

The album that I picked up was called Antone's Tenth Anniversary Anthology: Vol. 1.  The original set collected ten performances (later expanded to thirteen on the CD edition) taken from the club's Tenth Anniversary celebration in July of 1985 from a veritable who's who of blues artists.  At the time, I only knew a few of them.....Buddy Guy, James Cotton, Otis Rush, and Albert Collins......but, boy, did I get my ears full with this collection.  It was loaded with classic songs.

I have an iPod Shuffle that I use when I exercise or work in the yard.  One thing about the Shuffle is that you are limited in the number of songs that you can have on it due to space considerations....in my case about 440+ tunes, so the songs I have on it are some of my favorite blues tracks of all time.  Five tracks from this CD are on my iPod Shuffle.


The opener, "How's You Learn To Shake It Like That," is from harmonica player Snooky Pryor.  Pryor was one of the first, if not the first, harmonica player to play amplified, cupping a small mic in his hands with the harmonica.  What a wild and raucous eight minutes that must have been in person.  Pryor certainly knew how to work an audience and he's backed by Eddie Taylor, Derek O'Brien, and Jimmy Rogers on guitar, Bob Strogher on bass, Sunnyland Slim on piano (who also gets his own track, "Built Up From The Ground,"  with the same band a little bit later), and Timothy Taylor on drums.

Guitarist Taylor takes the mic for "If You Don't Want Me Baby," with the same band, and later he does his hit, "Bad Boy," which adds Luther Tucker and Hubert Sumlin on guitar.  This track wasn't on the original album and it's a mystery why it wasn't.  James Cotton reprises his tune, "Cotton Crop Blues," a few tracks later.  This is one of his classic tunes that he's done ever since he recorded for Sun Records in the 50's and he knows it inside and out.  He's backed by Rogers and Tucker on guitar, with Pinetop Perkins on piano, Strogher on bass, and Ted Harvey on drums.  Cotton also shines on a cover of his former band leader Muddy Waters' "Sad Letter Blues."


There's also a splendid track from Albert Collins, who covers the T-Bone Walker classic, "Cold Cold Feeling," where he shares guitar duties with Jimmie Vaughan, who was burning up the charts at the time with the Fabulous Thunderbirds, and enjoys keyboard support from Denny Freeman and the vastly underrated Mel Brown.  Rogers also plays his old favorite, "Walkin' By Myself," although an abbreviated version.

As good as the first half of the disc was, it pales in comparison to the second half, which really gets kicked off by Buddy Guy, who absolutes burns through the Elmore James tune, "Look On Yonders Wall," which segues into Guitar Slim's standard, "Things I Used To Do."  As mentioned here previously, Slim was a major influence on Guy as a musician and a performer and this is a masterful performance from Guy, with just the right mix of fire and intensity.

Pinetop Perkins does a rousing version of the old favorite, "Caldonia," with backing from Cotton, Tucker, and Rogers.  This is one of my all-time favorite blues tracks.  I think I listen to it at least once a week.  Perkins' easy rapport with the audience and the musicians is always fun to hear and these guys work really well together.


I think I've discussed Otis Rush's version of "Double Trouble" on this disc previously, but to me, it's the absolutely definitive version of this song.  Rush is inspired on vocals and guitar and the only thing wrong is that this version is not long enough, clocking in at under four minutes.  That's okay, though.  It's the best 3:46 you will ever spend, if you're a blues fan.....or an Otis Rush fan.  If Rush ever gave a finer live performance on any song, I've yet to hear it.  Finally, Jimmy Rogers closes the disc with "You're Sweet," but it's sort of anti-climactic, given what came before it.


What's probably the most fun about this disc is the obvious enjoyment that the participants had while doing it.  You can really hear the pleasure they have in playing together.....some of them had been playing together for years.....and how receptive their audience was.  The late 70's and early 80's were a tough time for many blues artists because interest in the blues was at a very low point, so you can tell when they had an audience eager to hear them, they made the most of it.

When I made the conversion from cassettes to CDs in the late 90's, I knew that there were several albums I'd had on cassette that I wanted to repurchase on CD, and this was one of them.  When I finally was able to track it down, I was pleasantly surprised to see the three extra tracks added.

For blues fans old and new, this is a fantastic live set.  It offers a pretty impressive list of stars performing at their very best.  It's so good that it's almost like you are sitting in the audience.....the mark of a great live blues album.